Sifting the 20th century like panhandlers, TACT has surfaced yet another piece of gold with the 1924 comedy ''The Show Off''

For those who squirm at the mere mention of the word “vaudeville,” a quick glance at the The American Century Theater’s ad for The Show Off, with its in-your-face boater-wearing showman, is likely to elicit a visceral response. Don’t be deterred. Sifting the 20th century like panhandlers, TACT has surfaced yet another piece of gold. As much as this play may be described as a comedy — and as funny as its original 1924 audiences may have found it — the emphasis in TACT’s production is on something far more relevant and intriguing; namely, the dynamic between a mother and her two grown daughters and the subtle passing of the matriarchic torch.

Set in the 1920s living room of the Fisher family, designer Leigh-Ann Friedel’s period colors and heavy pieces nicely and effectively evokes a family not of means but of traditional values. As Mr. and Mrs. Fisher and their three adult children come and go, it doesn’t take much of her tidying and getting into everyone’s business to see that running the home, and everyone in it, has been and always will be Mrs. Fisher’s mission in life. It is also not surprising that, being a woman of her times, she wants her daughters married sensibly and her son launched in a career. 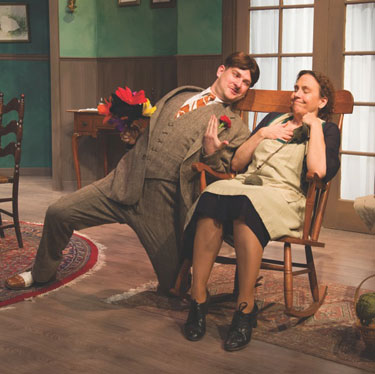 The proverbial wrench in the works arrives in the form of Aubrey Piper, a clownish braggart, who is avidly courting youngest daughter Amy. When the elder and well-married daughter Clara reveals that Piper has been lying about his income – and therefore his potential to keep a wife – Mrs. Fisher begins a campaign to bring Amy to her senses. But love will not be denied, and the closer Aubrey gets to Amy, the more his outrageous behavior begins to infiltrate the family. It’s a train wreck waiting to happen.

Driving the play as the not-always-comic battle-ax who almost never stops talking, Mrs. Fisher is an actor’s challenge. She is pushy and long-suffering, tough and yet surprisingly vulnerable. Lee Mikeska Gardner (looking a bit young for the role) brings much consistency to the full-on tenor of this under-educated but life-wise matriarch. One credibly feels the iron hand with which she has, for decades, ruthlessly balanced the household budget and the no-nonsense life she sees no point in questioning. When she takes on Amy who loves with a mindlessness Mrs. Fisher cannot conceive, there is a palpable sense of tension as she vies between adamancy, worry and abdication.

What works slightly less well are the moments in which Mrs. Fisher, just for a moment, unravels. These feel almost forced and in some ways point to a subtler question as to how to capture this character. A bit more ire and deadpan, a whiff of defeat and defensiveness, might have suggested a more convincing hidden volatility. It would have also have been a bit funnier.

As her nemesis, the insuppressible Aubrey, David Gram has the difficult chore of being 1920s wacky without over playing to the point of alienating a modern audience. He gets the balance right. Wisely, Gram and director Stephen Jarrett also choose to play Aubrey straight. Too tongue-in-cheek and Amy’s attraction – and thus the family tension – would be lost. And despite his one-dimensionality, there is something 21st century interesting about this character, especially since the humor is almost too dated to distract. Is he Asperger’s, emotionally damaged, sinister, or a simply a comic tool? Whatever he was to Kelly, here he seems, in his abstract way, to embody all that is random and unpredictable in life. Plan all you want, but the free radicals will have their way.

An emotional linchpin in the proceedings, Erin E. McGuff plays Amy with a nuanced mix of defiance and vulnerability. Struggling to gain and keep control of her adult life, McGuff captures this young woman’s anger, fear and neediness credibly. And although it is hard to see the chemistry between her Amy and Aubrey, when she and her mother begin to spar, the play becomes the dramatic page-turner it was no doubt meant to be: What will become of her? Will everything her mother predicts come true?

As Clara, Jenna Berk brings a languorous resignation that works well with her established (if not ideal) life, even if it dampens the sisterly connection with Amy. And although the 11th hour revelation of her subterranean transformation is interesting, one feels Kelly could have made more of its relation to Mrs. Fisher and her emotional legacy. Indeed, he seems more interested in the mechanics of his plot twist than what it means to this long-suffering family: Has Aubrey finally redeemed himself or has this simply been a near miss?

And there is even more to this play; the way the men don’t hear their wives, Clara’s pedantic recitation of addresses, her husband Frank’s personal mystery; the list goes on. It is no wonder that it ran 571 times once premiered and was revived another five times. The only wonder is why it took the creative efforts of TACT to haul it out of obscurity.