Even after more than a decade of diminishing returns, you still expect more from New Order than ''Lost Sirens''

Oh, the fun one could have reciting choice New Order lyrics back to the band led by Bernard Sumner, while listening to what passes for a new album from the pioneering synth-pop band.

”Shake it up, yeah!” you might want to declaim. Followed up with a plea: ”Why don’t you wake up and stop what you’re doing, right now?” And finally, despair. ”Something ain’t right, I’ve got a feeling. Don’t ask me why, but I’ve got to leave here.” 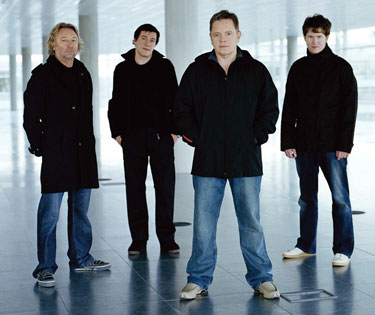 Ultimately, Lost Sirens isn’t atrocious. In fact, despite how those lyrics from ”Shake It Up,” ”Sugarcane” and ”I’ve Got A Feeling,” respectively, may make it sound, the set is not even bad. It’s just…. This is the once-great New Order! If the 33-year-old British group didn’t spark or at least spur your passion for electronic dance music, then chances are the many artists they’ve influenced or inspired since helping pioneer the style in the ’80s have. Moby, Underworld, the Scissor Sisters, the Killers – heck, even Bjork, Madonna and Lady Gaga – the list is exhausting.

But the band lost its footing in the new millennium, and now they’ve lost the man who, more than anyone else, is responsible for their distinctive, celebrated sound: Peter Hook, with his signature pulsating bass lines. Hook flew the coop in a pique several years ago. Hook is actually in the mix on Lost Sirens, since the short, eight-track set consists merely of outtakes from the same recording session that produced 2005’s lagging Waiting for the Sirens’ Call. But Hook wasn’t eager for these ”lost” tracks to see the light, at least in their current state. And it’s no wonder.

Even after more than a decade of lowered expectations from diminishing returns, you still expect, well, more. You may sing along to ”Sugarcane,” for example, but it’ll leave you with an aftertaste – the song would be more appropriately titled ”Splenda.” Similarly, while the music is sharp and punchy on ”Shake It Up,” Sumner’s vocals – aside from the interesting Underworld-style chants – often come out as if he were a disaffected boy, barely interested in what he’s saying. There’s genuine heat from Sumner’s guitar and Hook’s bass on ”Hellbent,” which also features some sweet keyboard riffs. But to my ears it sounds like low-rent Bob Mould. The gay alt-rocker in recent years has mined that song’s electronic-rock ground better.

”I’m trying to say I’m sorry,” Sumner sings on ”Hellbent.” But ultimately, there’s no need to apologize for the entire affair. Even if you have a pronounced distaste for most of the stuff here, nothing is as bad as, say, Pet Shop Boys’ Elysium. And you are sure to find diamonds in the rough. In fact, the appealing, leisurely paced bossa nova-styled ”Recoil” suggests the band could have a successful side project as lounge lizards – perhaps with the name Less-New Order.

Certainly Lost Sirens ends on a high note. ”I Told You So (Crazy World Mix)” is dramatic, dirge-like as it opens, and slower than New Order of yore – but not at all sleepy, and entirely appropriate for an aging band. And the way the electronic track builds is undeniably captivating. The band also rewards your attention by track’s end as they trot out a gospel-style diva, Dawn Zee, to coo and wail.

DOWNLOAD THESE: ”I Told You So (Crazy World Mix),” ”Recoil.”