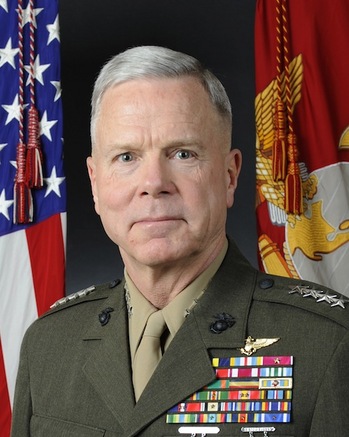 According to an email from the Marine Corps commandant’s staff judge advocate obtained by the AP, “We would interpret a spouses club’s decision to exclude a same-sex spouse as sexual discrimination because the exclusion was based upon the spouse’s sex.”

The memo notes ongoing controversy surrounding a spouses club at the Army’s Fort Bragg in North Carolina. Last month, Ashley Broadway was refused membership to the spouses club because she is ineligible to receive a military ID card under Pentagon regulations that refuse to recognize her marriage to another woman, Lt. Col. Heather Mack.

“We do not want a story like this developing in our backyard,” the email reads.

The action taken by the Marine Corps appears to go further than any steps taken by the Pentagon or other branches of the military to remedy this problem.

According to OutServe-SLDN Executive Director Allyson Robinson, there is no legal basis for excluding same-sex military spouses from such clubs, which are private, nonprofit organizations not governed by the federal government.

“The facts here are simple: There is no legal need or justification for any spouse to be excluded from a group like this, which exists to provide support to the spouses and families of our military men and women and the communities they serve,” Robinson said.

In a statement, Robinson applauded the action taken today, describing the Marine Corps as leading the repeal of “Don’t Ask, Don’t Tell.”

“The Marine Corps guidance issued today is a breakthrough and a clear indication that General Amos meant what he said when he said Marines would lead the repeal of Don’t Ask, Don’t Tell,” said Robinson. “Secretary Panetta should use his authority immediately to bring consistency across the services with regard to this issue and in doing so, a greater measure of equity to LGBT service members and their families.”

It was a sentiment echoed by Stephen Peters of the American Military Partners Association, who told the AP his organization would pressure the Pentagon to adopt an inclusive policy that applies to all branches of the military.

“You can’t have different standards with the different branches,” Peters said.

According to OutServe-SLDN, Broadway was notified in an email today that Fort Bragg will issue “Friends of Bragg” passes to same-sex spouses who can show a marriage certificate and whose military spouse sponsors them. Although this will allow the spouses access to Fort Bragg, it will still deny a number of services granted to military spouses, including shopping privileges at the post exchange and commissary. It also does not guarantee the Association of Bragg Officers’ Spouses will grant membership based on the pass.

“The ‘consolation prize’ offered by Ft. Bragg’s leaders to Ashley Broadway and others does nothing to remedy the situation at hand – the ongoing discrimination by the Association of Bragg Officers’ Spouses – nor does it truly advance equity for gay and lesbian service members and their families,” Robinson said. “Ft. Bragg had the opportunity to lead here. Instead, its leaders delayed, equivocated, and made excuses. Now that opportunity is lost.”