Star Trek put him on the map. Facebook launched him to superstardom. And a musical called Allegiance is earning him raves. What's next for George Takei? Only time will tell.

In early May 2012, George Takei was driving along White Mountain Boulevard in Arizona, where he and his husband, Brad, own a getaway home. Cruising along, listening to the radio, an announcement jolted him: President Barack Obama was going to make a statement. On marriage equality. 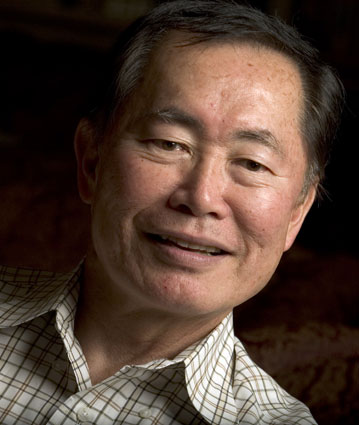 Takei — who laughs warmly, easily, frequently — chuckles over this minor mishap. “I’m of my generation,” sighs the 75-year-old actor. “My first reaction was radio.”

He quickly amended his instructions to turn on the TV. What Brad saw — and George heard on his car radio — was a sitting president declare his support for same-sex marriage. It was a historic moment that did not go unappreciated by Takei.

“It was so moving to have the president of the United States make that statement in an election year where it would have certain consequences,” he says, a note of admiration in his melodic basso profundo. “With all the pressure that was being brought on him on so many other issues, he was willing to take that bold stand because he felt it was right. And he won.”

Obama’s second term gives Takei hope — hope for a brighter future for LGBT Americans, hope for the dissolution of DOMA, hope for a world where gay youth who come out are not met with the vitriol of homophobia.

“There are still extremely strict families that are homophobic,” he says, “and the most heartbreaking thing of all is these young people who are either kicked out of their homes or run away from home.” He praises the work of gay and lesbian youth shelters for providing support, solace and love to these cast-offs. “These gay and lesbian centers,” he says, softly, “are so important.”

Takei himself came out softly at first. His public pronouncement came decades after he’d acquired fame as Lt. Cmdr. Hikaru Sulu on the original Star Trek series and after his renowned stints on The Howard Stern Show in the ’90s, where his utterances of “Oh, myyyy” attained legendary status in the pop-culture stratosphere. Takei announced to the world he was a gay man in a 2005 interview with Frontiers magazine, revealing at the time that he’d been in a relationship with Altman for 18 years. In 2008, the two were married in California, in those joyous, legal moments before the encroachment of Proposition 8.

Takei is a relentless advocate for LGBT rights — but he’s even more passionate about bringing to light a dark period in America’s World War II history when Japanese-Americans were herded into internment camps because, says Takei, “[we] happened to look like the people who bombed Pearl Harbor.” Takei has fostered and nurtured the creation of Allegiance, a musical that looks at the effects of internment on a Japanese-American family in the weeks and years following Pearl Harbor. Written by composer Jay Kuo, with a book by Kuo, Lorenzo Thione and Marc Acito, Takei stars in the production along with Lea Salonga and Telly Leong. The musical played at The Old Globe in San Diego to enormous acclaim (and box-office records) and is now Broadway bound.

But a funny thing happened to George Takei during his efforts to get the word out about Allegiance: He became a Facebook superstar.

“We were tilling [Internet] soil to build an audience for Allegiance,” says Takei. “But you can’t do it by just having an Allegiance website.” So he took to Facebook, where he reached out to his base of sci-fi fans by posting sci-fi memes with amusing commentary. “Then you add some kittens,” he says, “because they seem to be successful in garnering an audience.”

The audience grew. And grew. And “before you know it, you have hundreds of thousands of people and you say, ‘Oh, my goodness, this thing has a life of its own.’ And so you keep doing what you find to be successful.” Successful is an understatement. As of this moment, Takei has an astounding 3.3 million “Likes.” Fans send him thousands of memes, hoping one will appear in his frequent daily posts, complete with one of his wryly observational, saucy puns. Takei also uses the page to promote serious causes near and dear to his heart. And he’s just released an e-book on his Internet experience, Oh Myyy! (There Goes the Internet), with a print edition to follow soon.

Takei’s Facebook presence exhibits just how engaging, how indelible, how extraordinary a personality he is. Where so many actors are forever defined by their past roles, trapped in a loop of singularity, George Takei has blossomed by forging into the future. He does not renounce his past as Sulu but he has also reclaimed himself from it. He has become his own force of nature, an international phenomenon so strong, so culturally relevant that one could almost call this period in popular culture, The Takei Time.

METRO WEEKLY: When was the first moment you realized — that you thought to yourself — ”I am a gay man?”

GEORGE TAKEI: It doesn’t come at a moment in time. It’s a slow, gradual recognition of who you are. I remember, even in grammar school, I was excited more by my classmates — boys, a few particular boys. Other boys kept saying, ”Oh, yes, Monica is gorgeous, she’s hot,” and all that. I thought she was all right, but Richard and Bobby were the cuter ones that really excited me. So I realized that even back then I knew I was different from the other guys, I just didn’t vocalize it.

Then in junior high it grew, but I realized that that wasn’t what the other guys did, so I played the part and dated girls and went to the prom. All the while the boys were more interesting, more exciting. Like at summer camp, one particular counselor — blond and very tanned, with glistening blond forearm hair — was really sexy. So it’s a gradual realization that I’m different, but it’s not like what the other boys are like. You hide it.

Randy Shulman is Metro Weekly's Publisher and Editor-in-Chief. He can be reached at rshulman@metroweekly.com.
← Previous Story Frank Talk
Next Story → BillT for Dance