It’s been a year since transgender District resident Deoni Jones was fatally stabbed in the face at a Northeast D.C. bus stop. But the prosecution of her attacker has been slow, leading to calls for more action by the District government and the U.S. Attorney’s Office for the District of Columbia. 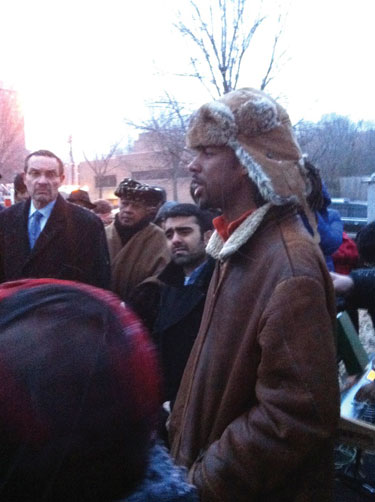 Jones’s family, flanked by relatives, friends, city leaders and members of the LGBT community, held a vigil Feb. 2, the one-year anniversary of Jones’s death, near the bus stop where she was killed at the intersection of Sycamore Road and East Capitol Streets NE. Several members of the Metropolitan Police Department (MPD) and the District of Columbia Fire Department (DCFD) also attended the vigil to pay tribute to Jones’s memory.

Speaking first, Alvin Bethea, Jones’s father, thanked all those in attendance for coming, saying he was grateful for their support during this difficult time. But Bethea also said he was frustrated with the pace of the prosecution of the suspect charged with killing Jones.

A Northeast D.C. man, Gary Niles Montgomery, was arrested following a weeklong manhunt for Jones’s killer and eventually indicted on a charge of first-degree murder. Although Montgomery was found competent to stand trial last year, last month D.C. Superior Court Judge Robert E. Morin vacated Montgomery’s trial date, set for June 10, in order to further evaluate Montgomery’s competency to stand trial. Montgomery remains held at St. Elizabeth’s Hospital, where he will have to undergo additional mental evaluation before a final determination is made to move forward with prosecution.

By name, Bethea specifically called out the prosecuting U.S. attorney, David Gorman, and criticized Gorman’s decision not to pursue an indictment with bias enhancements due to Jones’s status as a transgender woman. It is yet unknown whether Jones’s transgender status was a factor in her attack. Bethea further said that the family intended to file a complaint against the U.S. Attorney’s Office for the District of Columbia (USAODC), which he described as ”derelict” in prosecuting the homicide ”to the fullest extent” of the law.

Bill Miller, a spokesman for the USAODC, issued a statement but declined to comment on an ongoing case.

”The U.S. Attorney’s Office is committed to pursuing hate/bias enhancements when investigations warrant,” Miller said in the statement. ”Because this matter is pending, we decline to discuss the specifics of this particular case.”

Bethea’s announcement seemed to catch many of the local dignitaries at the vigil off guard. Speaking after Bethea, Mayor Vincent Gray (D) reiterated his commitment to the LGBT community and used the opportunity to announce a partnership between the Mayor’s Office of GLBT Affairs and the U.S. Attorney’s Office to solicit community impact statements from members of the LGBT community.

Community impact statements are intended, in part, to improve the prosecution’s ability to pursue bias enhancements in cases where hate or bias seems to be a factor. Currently, several community groups, such as Gays and Lesbians Opposing Violence (GLOV) and the DC Trans Coalition (DCTC) already submit community impact statements in cases where LGBT people appear to have been targeted due to their sexual orientation or gender identity. In several high-profile cases, such as the prosecution of MPD Officer Kenneth Furr for an incident where he shot at a car in which five people were sitting, at least two of whom were transgender women, judges have read aloud in court some of the community impact statements submitted by local LGBT rights or safety groups, predating any partnership with the USAODC.

In response to the mayor’s announcement, Miller, the USAODC spokesman, issued a statement.

”The U.S. Attorney’s Office is deeply committed to prosecuting hate crimes against members of the LGBT community,” Miller said in the statement. ”Community impact statements are an important tool for informing judges at sentencing about the effects of a crime that go beyond the direct victim. These statements are particularly important in hate crime cases, where violence fueled by discrimination can strike fear into an entire community. We are pleased that the Office of GLBT Affairs has offered to solicit community impact statements in appropriate cases and look forward to working with them to ensure that the LGBT community is heard at sentencing in hate crime cases.”

Councilmember David Catania (I-At Large), who had earlier presented Jones’s family with a large bouquet of flowers, told a story of a transgender woman he had known as a child in Kansas City, Mo., who was killed in 1983. He contrasted the lack of support for that transgender woman with the outpouring of support that Jones, even in death, received from her family, neighbors, and the local LGBT community.

Councilmember Yvette Alexander (D-Ward 7), in whose ward Jones was killed, spoke of the need for a ”zero tolerance” attitude towards anti-LGBT violence.

”There is still a GLBT community out there that needs our love and respect,” Alexander said.

Brian Watson, director of programs at Transgender Health Empowerment, offered his condolences and support to the family and emphasized that the attack on Jones was not an isolated incident.

”We’re here today to remember one person. But remember, there are other crimes, other transgender individuals who have been killed, and their murders have gone unsolved,” Watson said. ”Let’s remember to be supportive of the Police Department, the mayor, the City Council, everyone, as we still work to make sure that we bring those perpetrators the justice that is due.”