All eyes on marriage and the Supreme Court 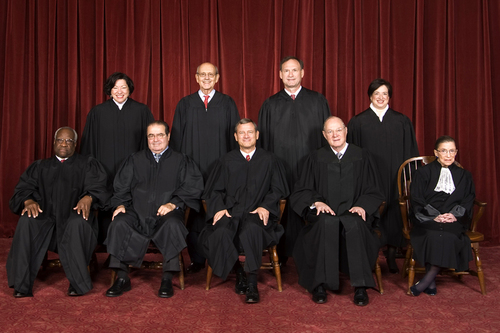 After years of litigation that began in 2009, supporters and opponents of same-sex marriage will have what could be their conclusive day in court.

The nine Supreme Court justices will hear arguments in two landmark cases, considering the constitutionality of California’s Proposition 8 on Tuesday, March 26, and Section 3 of the 1996 Defense of Marriage Act on Wednesday, March 27. Their rulings in those two cases, which are not expected until late June, could be two of the most significant in the history of the high court.

The two consecutive days of oral arguments will begin with an hour for arguments Tuesday morning in the Proposition 8 case, Hollingsworth v. Perry.

Arguing on behalf of the opponents of Proposition 8 will be Theodore Olson, the conservative half of the star legal duo that has been challenging the California same-sex marriage ban since 2009. Olson, who served as President George W. Bush’s solicitor general, has led the challenge with fellow attorney David Boies. Following the Obama administration’s decision to file a brief in the case last month, Solicitor General Donald Verrilli will join Olson.

Because California officials under Democratic Gov. Jerry Brown have refused to defend Proposition 8, attorney Charles Cooper will argue on behalf of supporters of California’s Proposition 8, which was approved by California voters in 2008 to amend the state’s constitution to prohibit same-sex marriage after that right was already granted to gay couples. If the justices decide supporters of the discriminatory law do not have legal standing to bring the case, the broader constitutional questions raised by the case will not be addressed and the ruling striking down Proposition 8 by the lower trial court will stand.

Advocates, however, are hoping the high court will hear the Proposition 8 case as Olson is expected to make a sweeping argument that not just California’s ban, but all state bans on same-sex marriage are unconstitutional. Indeed, he will argue that to deny same-sex couples the right to marry is a violation of the U.S. Constitution.

On Wednesday, the high court will hear arguments in the case challenging Section 3 of the Defense of Marriage Act, which defines marriage as between a man and a woman and prohibits federal recognition of same-sex marriage. When passed and signed into law by President Bill Clinton in 1996, DOMA had little impact. But as more and more states have legalized same-sex marriage, DOMA has led to the denial of more than a thousand rights and benefits to married same-sex couples.

United States v. Windsor surrounds 83-year-old Edith Windsor, who is suing to recoup about $363,000, the federal estate tax she was forced to pay on her “inheritance” following the death of her wife, Thea Spyer. The federal government does not tax wealth that passes to a surviving heterosexual spouse. Because of DOMA, however, the federal government has refused to recognize Windsor and Spyer’s 2007 Canadian marriage license.

In an unusual occurrence, the federal government as represented by Verrilli will be arguing on behalf of Windsor along with her attorney, Roberta Kaplan. Since February 2010 the Obama administration has refused to defend DOMA as constitutional, leading the House Republican-controlled Bipartisan Legal Advisory Group (BLAG) to defend the law in federal court. Paul Clement, who succeeded Olson as solicitor general for the Bush administration, will be arguing on behalf of BLAG.

In both cases, same-sex marriage supporters will call for heightened scrutiny, arguing that because of the history of discrimination faced by gay people both laws should be found unconstitutional. Heightened scrutiny is generally used to evaluate laws that classify people based on race, gender and religion.

There will be no cameras in the courtroom on either day and most will not know what is said until after the court adjourns and transcripts and audio recordings are released. Members of the press are permitted only pen and paper inside the courtroom.

Sometime Thursday, March 21, a line began to form outside the Supreme Court with members of the public vying for one of the 150 first-come, first-served seats in the courtroom. That line held even as the region’s first significant snowfall began late Sunday night, signaling the scope of national attention on these two cases. The two days of arguments are the pinnacle of what has been a decades-long struggle for equality and symbolize the broader LGBT-rights movement.

A ruling is not expected until the final weeks of June, before the court’s summer recess. Marriage-equality supporters have voiced optimism that the court will issue a ruling with a clear path toward same-sex marriage across the country, but while many believe the Supreme Court will strike down DOMA, few are predicting how the court will rule in the Propostion 8 case. In the days and weeks to follow, the questions and comments made this week by members of the court — particularly swing Justice Anthony Kennedy — will be analyzed and dissected.

There will also be a focus on Chief Justice John Roberts, who, while appointed by President George W. Bush, has shown an independence from his conservative ideology when, last year, he saved health care reform by siding with the liberal members of the court. Indeed, as the chief justice, Roberts has an interest in how history judges his court.

Among those who will be seated in the section reserved for guests of the chief justice during Tuesday’s arguments is 48-year-old Jean Podrasky — a lesbian from San Francisco and Roberts’s cousin.

Justin Snow is Metro Weekly's former political editor and White House correspondent. Follow him on Twitter @JustinCSnow.
← Previous Story Will Portman speaks out on marriage equality and coming out
Next Story → Sen. Mark Warner announces his support for gay marriage