''Voodoo Macbeth'' touches, with rawness and relevance, on all that is unsettled about humans at war

Adapting an adaptation, The American Century Theater puts an intelligent and provocative spin on Orson Welles’s Voodoo Macbeth, itself a radical interpretation of Shakespeare’s Scottish play. Instead of Welles’s dangerously all African-American, magic-filled Haiti, director Kathleen Akerley sets her tragedy in a war-torn Scotland of 2033 in which, for reasons left to the imagination, all-male American troops have been dug in for a decade. They are tense, battle-weary and living an insular and uneasy existence among an unseen local population. Like Shakespeare’s medieval Scotland and Welles’s closely held Haitian culture, it is an isolated and deeply hierarchical community. With soldiers so bored and stressed from danger and (most of them) far removed from their families, it’s not surprising they have devolved into a new normal, which includes strange rituals, self-harm and the potential for delusional fervor. And like the earlier plays, it’s a credible pressure-cooker for Macbeth’s ambition and the malevolent magic that feeds it. It is a Macbeth by way of Apocalypse Now and it’s a premise that works exceedingly well.

In fact, it works so well it begs to be freed from the constraints of a small theater, even as it benefits from the intimacy of close quarters. With a bigger budget, more time for development, and the further encouragement of performances full of promise (and the keeping of those already in full bloom), this production is a real contender for its power and originality. 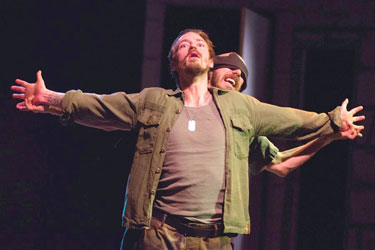 Of course, having said that, not everybody will want to see their Shakespeare re-envisioned into what is essentially a fragging, and others may be unsettled by a Lady Macbeth (called here by her historical name of Gruoch) played as a man (not by a man as she was in the bard’s day). And still others may be unhappy with Welles’s changes to the play, which Akerley keeps. But depicted with her care and the actors’ credibility, this is an experiment that deserves an open mind.

And it starts with the ensemble who, working cohesively, suggest effectively a military far from home, with nerves and moral compasses unraveling. Acquitting themselves well, they inject credible edge to their outbursts and the near-somnambulistic refuge they take in religion. In keeping with her theme and particularly inspired, Akerley’s witches present as prisoners of war blindfolded and made to harm those who are perhaps their own. Their leader, Hecate, given far more prominence than Lady Macbeth/Gruoch by Welles, is less elegantly conceptualized, but is nevertheless intriguing as he haunts the encampment in the guise of various warlike personas.

But as essential as the ensemble may be, this play is of course about its Macbeth. And here, emerging wild-eyed and tightly sprung from the sweaty, burned-out ranks, Joseph Carlson’s is a feverishly good one. Angry, uncertain, adamant and bereft, he is a Macbeth full of the madness of war and the complex drive of a man determined to survive. Completely at home with the language, there is no light between Carlson’s delivery and expression; and this alone is a rarity. He brings memorable identity to this man and theatrically, physically, it is a wholly riveting performance.