Over the past decade Matt Bailer has become one of D.C.'s most prolific DJs, spinning in a wide range of venues

”Coffee is my vice,” laughs Matt Bailer. ”I literally drink coffee when I’m DJ-ing at Nellie’s. It’s kind of the running joke around there.” Bailer, who spins at Nellie’s every Friday night, also guzzles the occasional 5-hour Energy, but never Red Bull: ”I actually get Red Bull hangovers, that’s what a lightweight I am.”

And over that past decade the 35-year-old has become one of D.C.’s most prolific DJs, busy every weekend and several nights a week, at venues as varied as Town, JR.’s and L’Enfant Café, where he plays for the restaurant’s mixed-crowd, ”drunk brunch” La Boum Saturdays. The Maryland native, who studied theater at Duke University and lived in L.A. for a few years, got his start in D.C. nightlife at the now-shuttered Omega, spinning videos during a long weekly shift. ”This is back when Apex was the Friday night destination,” he says, ”so we would get a rush of people from 11 to midnight. But for the three hours before that and the three hours after, it was like…crickets.” These days Bailer is once again a VJ, spinning videos every other Tuesday, including Tuesday, March 19, at JR.’s indie-pop/rock party, Underground. 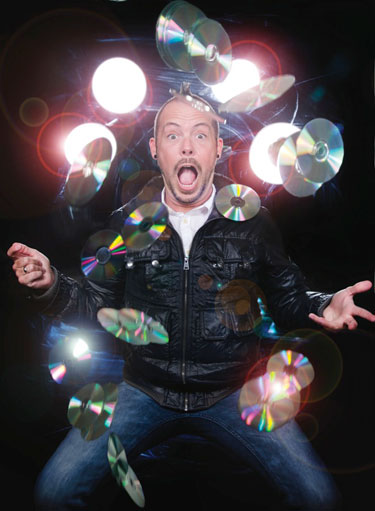 Bailer is best known for two monthly parties that got their start, however improbably, at the Adams Morgan Eritrean restaurant Dahlak. There’s the wildly popular dance party Mixtape, thrown with Shea Van Horn the second Saturday of the month, usually at the Black Cat. And then there’s Peach Pit, the ’90s-themed party that touches down on third Saturdays at DC9. ”A lot of people have commented that [Peach Pit is] the most genuinely, organically mixed crowd of a dance party in D.C. – in a fun way, not a weird, self-conscious kind of way. Everybody loves dancing to ’90s music.” Like many a mixed party before it, Peach Pit gets gayer the later it goes, filling up with straight women first. Bailer would like to change that, to truly ”keep it mixed, and keep the energy, [because] by the time the gays get there, there’s like a crazy line outside, and there’s nothing that I can really do to get them in.”

Bailer has always been passionate about music, having taken piano lessons all the way through high school as well as playing saxophone in the school band, even singing in his church’s folk music group. In college he started writing his own songs – an eclectic mix he amusingly calls ”pop-pouri” – and he hopes to soon ramp up efforts at recording and producing, maybe even try his hand as a singer-songwriter.

But DJ’ing will likely remain his fulltime passion. ”I can’t see myself doing anything else,” he says. ”I really feel like I’m doing what I was put on this planet to do. I feel like this is why I’m here.”