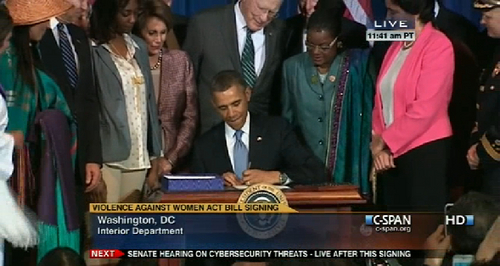 President Barack Obama signed the Violence Against Women Act back into law Thursday, which for the first time includes explicit protections for LGBT victims of domestic violence.

At a ceremony held at the Interior Department, Obama welcomed an overflowing room of supporters for the signing more than a year after Congress failed to reauthorize VAWA in October 2011 due to Republican opposition.

“This is a country where everybody should be able to pursue their own measure of happiness and live their lives free from fear no matter who you are, no matter who you love,” Obama said. “That’s got to be our priority. That’s what today’s about.”

Obama added that “today is about all the Americans who face discrimination based on sexual orientation and gender identity when they seek help.”

Among others, Obama was joined by Sharon Stapel, executive director of the New York City Anti-Violence Project, the country’s largest organization dedicated to eliminating hate violence, sexual violence and domestic violence affecting LGBT people. “Sharon and all the other advocates who are focused on this community, they can’t do it alone,” Obama said. “And now they won”t have to.”

Last week, the Republican-controlled House of Representatives approved the Senate’s version VAWA despite the House GOP’s previous objections to the provision for LGBT people and Native American women. Although House Republicans attempted to pass their own version of VAWA Feb. 28 without those contested provisions, the House rejected that bill 257-166 and passed the Senate version of the bill 286-138.

Obama was joined by Vice President Joe Biden, who was the original author of VAWA when it first passed in 1994, along with several Democratic and Republican members of Congress. According to Biden, the bill signed into law today strengthens the commitment first made 19 years ago.

The version of VAWA signed by Obama today has been praised by advocates. Rea Carey, executive director of the National Gay and Lesbian Task Force, said the federal law will ensure “the distress experienced by survivors of sexual violence is not compounded by a lack of proper response from service providers or law enforcement.”

“Thousands of survivors of domestic and sexual violence will get the care they need because so many stood firm for what is right,” Carey said in a statement. “This is a great day for America.”