Moments ago, the Korean giant wrapped up the official announcement of their new flagship, the Samsung Galaxy S 4, successor to last year’s powerhouse — both literally and figuratively — the Galaxy S III. We’ll get to the phone in a minute, but first, let’s talk about what just happened. For this launch, Samsung changed its usual habit of announcing the Galaxy line in Europe or Asia, and instead brought its S 4 to the glimmering streets of the Big Apple — apparently at the bequest of the U.S. carriers. What followed, though, was just bizarre.

In a gaudy, brash, awkward, corny and downright uncomfortable hour-long presentation, Samsung displayed the S 4 in a Broadway-style series of “real-life situations” — a father videoing his son’s dance recital, a group of bridesmaids on a bachelorette weekend, etc., etc. — all utterly pointless and needlessly “amusing.” Samsung was aiming to prove that the S 4 is a phone designed to complement the user’s life, and fit into every scenario by enabling easier access to the things we need most — and some we didn’t know we needed — but for me, its message was lost under the vulgarity of it all. Compare to last year’s simple, classy launch in London, which was the standard presentation showing off the phone’s assets in a clean, simple fashion, and it’s clear why you can’t have nice things, America. You ruin them. 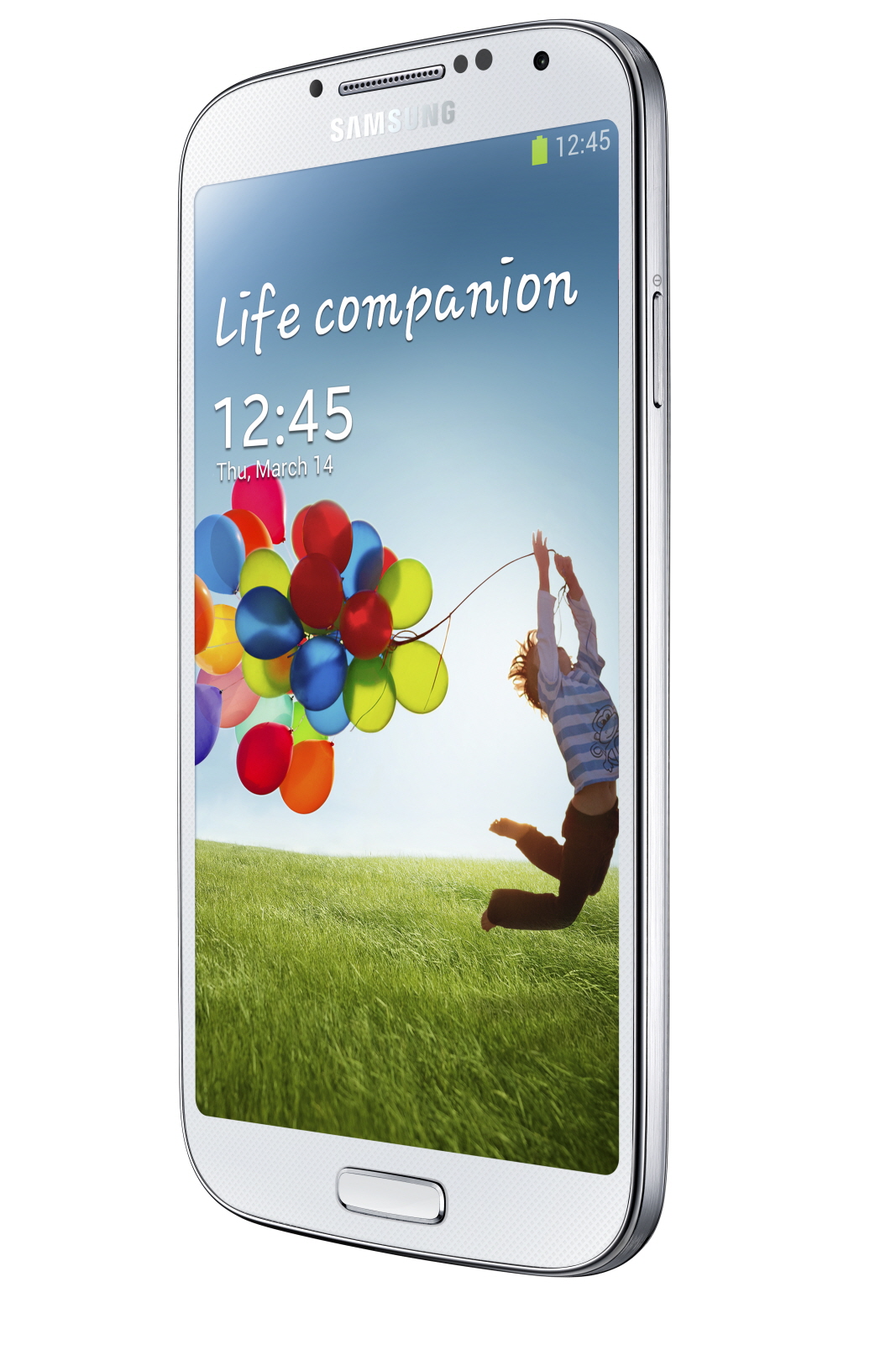 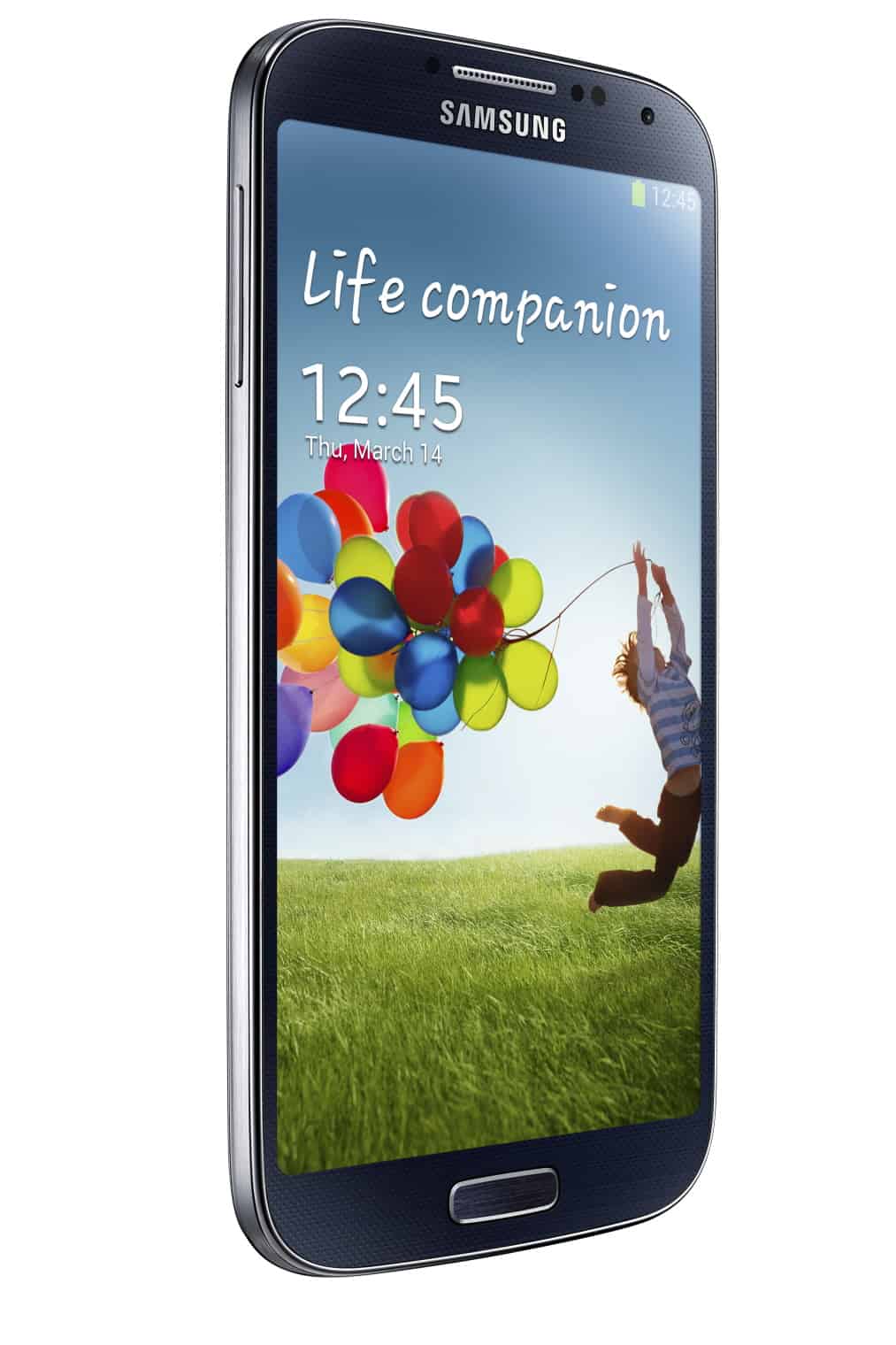 What did you expect? It’s a technological heavyweight, in a package that’s more refined, elegant and slender than the love-it-or-hate-it “nature-inspired” S III.

Compared with last year’s model, the S 4 borrows from its big brother, the Note II, arguably Samsung’s most handsome device. Its squarer frame is a welcome departure from the S III’s awkward curvature, but this is accompanied by a lack of change on the build-front. Unlike its peers, the HTC One (which sports an all-aluminum build) or the Sony Xperia Z (which mixes tempered glass and the firm’s “omnibalance” industrial design), the S 4 uses Samsung’s tried-and-true plastic materials to full effect. Glossy, cheap, light (just 130g) — it’s business as usual for the flagship, though it will also be strong and inflexible, and much more resilient to drops than Sony’s all-glass affair.

Across the front of its 7.9mm-thin body, the S 4 sports an enlarged, 4.99-inch Super AMOLED Full HD display — with the ever-popular 1080p resolution, which leads to a ppi of 441, in-line with the current Android crop and crushing the iPhone’s 326ppi, though the average user will be hard-pressed to notice as huge a leap in clarity as was noticeable from the S II to the S III’s screen. Draped over the back is a new, 13MP BSI f/2.2 sensor, and, above the 1080p screen, a 2.1MP front facer. The usual array of speakers, microphones, hardware and software keys and sensors are in place, with little change over the S III in terms of placement.

Inside, the S 4 is bang up-to-date. Samsung is shipping it with a choice of processors, depending on region. Users in Europe and Asia will likely receive the 1.6GHz Exynos 5 Octa 8-core CPU from Samsung’s processor geniuses, which marries a 4-core Cortex A15 chip to a 4-core Cortex A7 chip to balance between raw horsepower and frugal power-saving for maximum performance and efficiency. North American users can expect their S 4 to be filled with Qualcomm silicon, as with the S III, with the Snapdragon 600 being the most likely candidate (a la the HTC One), clocked at 1.9GHz. LTE is naturally on-board, as is 2GB of RAM, and 16, 32 and 64GB of storage, expandably by another 64GB via the MicroSD card slot. The usual assortment of NFC, MHL 2.0, Bluetooth 4.0, GPS, GLONASS, and Wi-Fi a/b/g/n are on board, with power being derived from a meaty 2,600mAh battery, accessible via Samsung’s trademark flimsy-looking removable battery cover — which, as usual, is deceptively flexible and resilient. 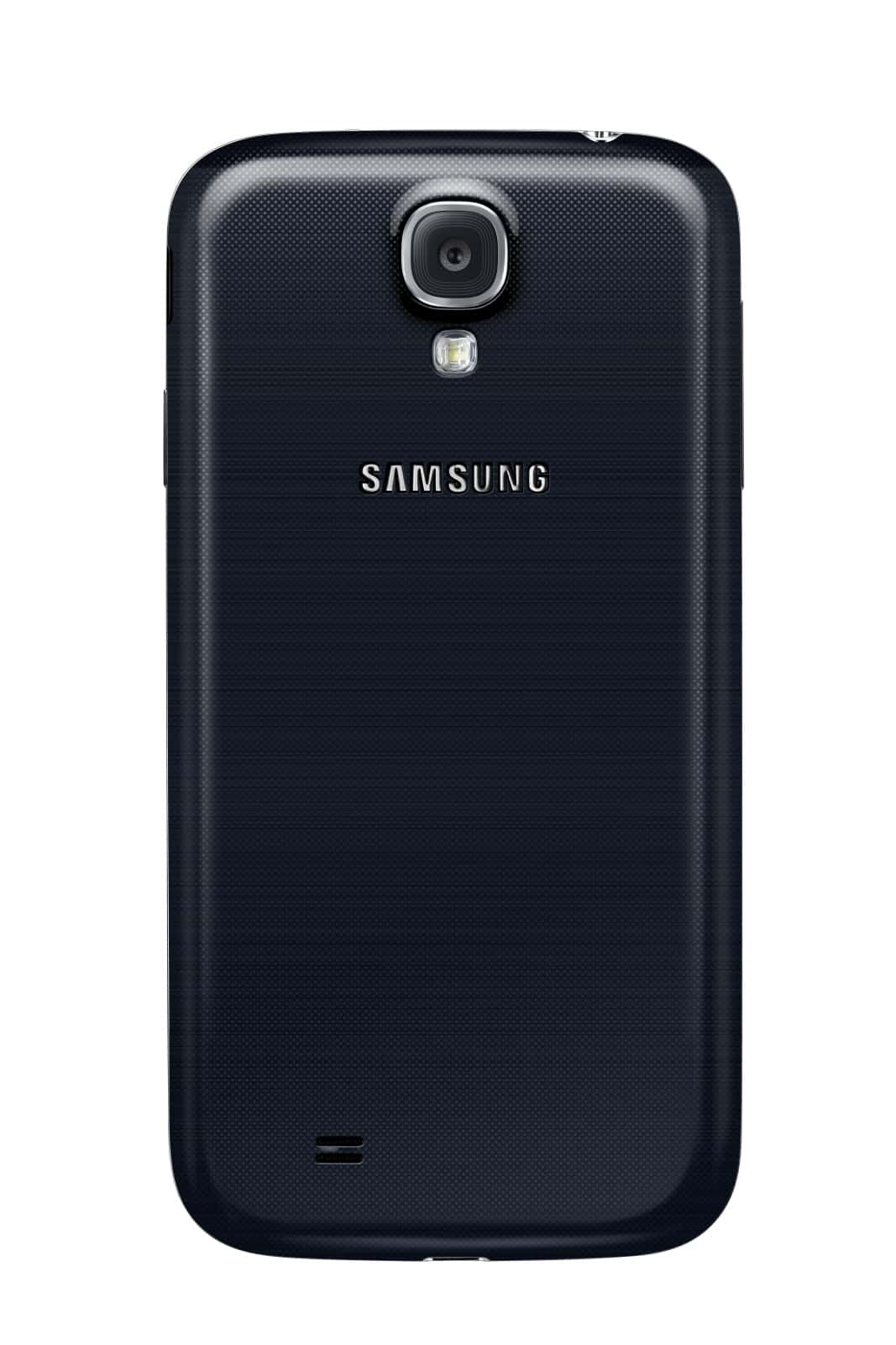 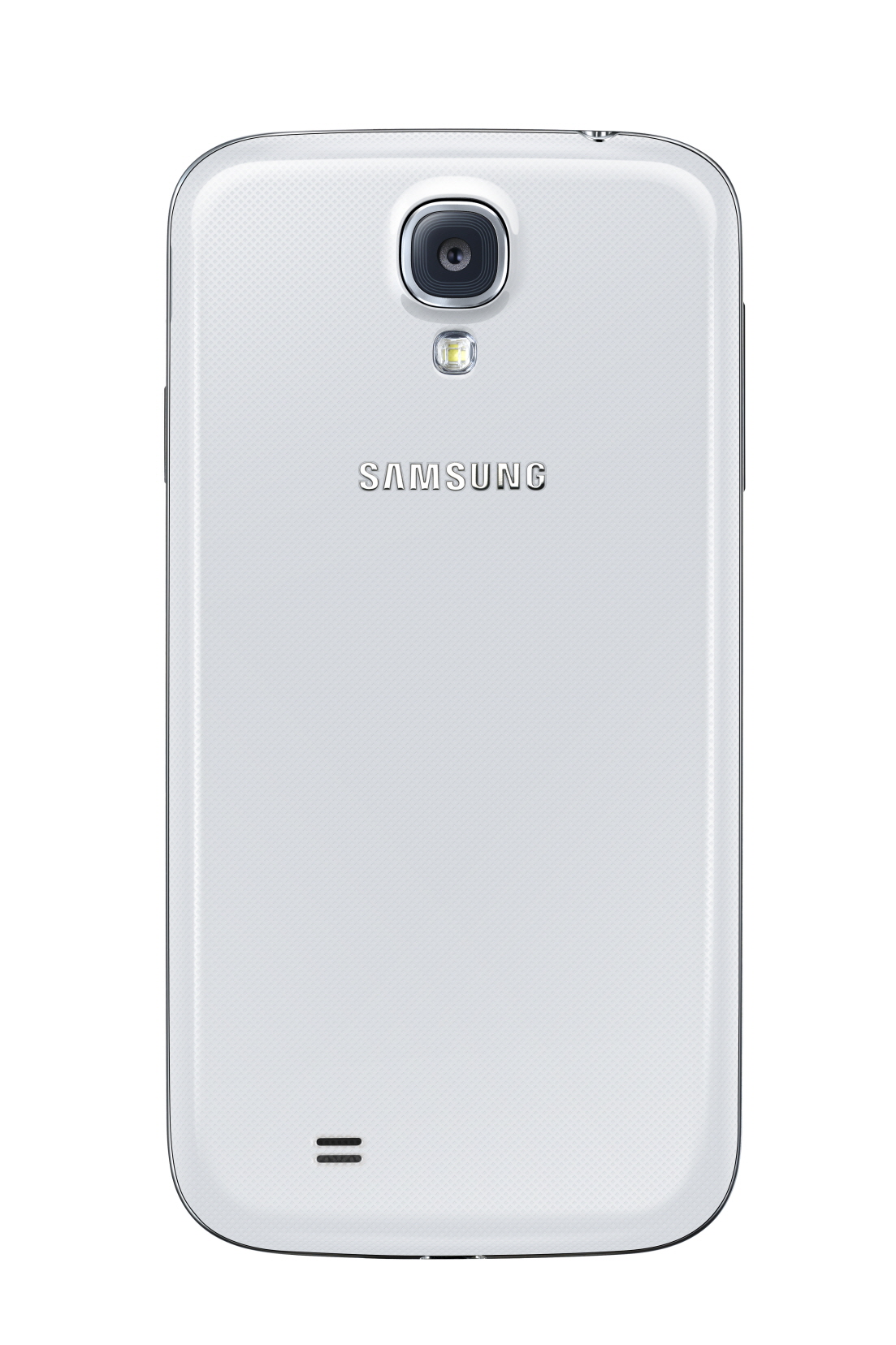 Where Samsung is really pushing the S 4, though, is software. Just as the S III sought to bring software to the forefront — Android is usually focused on the hardware and raw specs — so too does its successor. And there’s a lot of software to discuss.

Touchwiz is back, this time atop Jelly Bean 4.2.2, and it includes current items such as Smart Stay, S Voice and AllShare. In fact, everything available on the GS III and Note II is present and correct — including the Note II’s AirView preview mode, which required the stylus to hover over the screen and preview videos, photos and other content before they were opened. Thanks to the S 4’s new screen, this can be operated by hovering a finger over the display, with the heightened sensitivity also allowing for usage while wearing gloves, much like Nokia’s Lumia 920. New additions include S Health, which pairs with accessories such as a heart-rate monitor, weight scales, and fitness wristband (think Jawbone Up and Fitbit) to track a user’s fitness, wellbeing, and even their blood sugar and diet; Group Play, which networks up to 8 S 4s into a virtual surround sound speaker system for playing music through (this is actually really cool), or for networked multiplayer gaming; Air Gestures, which involves hovering your hand over the phone while its on a flat surface to control it without having to touch; S Translator, which supports 10 languages and automatically translates email, texts, spoken responses and ChatOn IMs; Smart Scroll, which monitors a user’s reading and scrolls the display based on the tilt of the device; and Smart Pause, which can, unsurprisingly, pause a film should you look away at something. Story Album generates photo albums based on location and date, Eraser mode can remove unwanted subjects from a photo, Drama Shot apes other handsets in allowing animated GIFs to be made, and Sound & Shot allows audio clips to be attached to still images — kind of like a video, except more pointless.

This isn’t even all of what Samsung has baked into their latest flagship, as there’s still S Voice Drive, Cinema Photo, an updated camera UI that borrows from the Galaxy Camera and a host of other tweaks and additions designed to further mask Android beneath a veneer of user interactivity and useful additions.

If I sound rather restrained in my reporting, or lacking in enthusiasm, it’s because I am. I owned the Galaxy S II, Note, and Note II, and have spent a lot of time with the S III. Each was a great device, which markedly improved upon its predecessor, and stood shoulders above its competition — or, in the case of the Note, created its own segment and then dominated it. The S III managed to eat into Apple’s install base, toppling it from many charts around the world, and brought the Galaxy brand into the mainstream in a way no manufacturer thought possible in the wake of Cupertino’s fruity handset.

The S 4 should be a trailblazer, a phone above all others, one that takes the best of today’s hardware and marries it with killer software in a package that makes you want to upgrade from whatever lesser device you’re currently holding.

It matches the HTC One and Sony Xperia Z, and bests the iPhone 5, in terms of internal hardware and raw specs, but that’s somehow not enough. It’s certainly a handsome device, more so than it’s awkward-looking predecessor, but it’s still the same plastic-fantastic handset as before.

And, really, that’s the problem here. There isn’t much that we haven’t seen before. The design isn’t a radical departure, the software, while embellished with several useful and cool new additions, is much the same as before, and the internals merely mimic the competitors rather than eclipsing them. The Galaxy line is one of the biggest brands in technology, with the S III forging a wider path than any other Android handset that has come before. Where the S 4 falters, at least based on initial impressions, is in not doing enough to further advance that cause. The S III gave Android users a phone they could rally behind, to show off to their iPhone-toting friends and cause genuine envy over certain aspects of its design — backed up by Samsung’s clever, Apple-skewing advertising. What will the advert be this time around? Here’s the S 4 — it’s pretty similar to our other devices, it has similar specs to its competitors, and it does some cool software tricks. Enjoy.

That’s not what the S line of handsets is for. It’s supposed to take the fight directly to Apple and beat it at its game, at least until the newest iPhone is released in October. Without a full review it’s impossible to completely analyze the S 4 in a fair manner — but based on this launch, with its gaudy brashness giving way to underwhelming familiarity, I’m not hopeful for the S 4 as a halo device for 2013. Will it sell? Of course. Will I buy it? No thanks. I’ve got an Xperia Z, and there’s nothing here compelling me to change.

Which is something I didn’t think I’d be saying today.

Watch the full livestream announcement below (starting around the 40-minute mark) at your peril. It’s just awful.

Rhuaridh Marr is Metro Weekly's managing editor. He can be reached at rmarr@metroweekly.com.
← Previous Story Samsung Tweets image of the presumed Galaxy S4
Next Story → Jawbone releases Up app for Android