Allies on the Ice

As far as the D.C.-area hockey community is concerned, the time to end any stereotypes of hockey as a virulently homophobic sport filled to the brim with machismo is long overdue. And now that community is getting backup on a national level.

The National Hockey League (NHL) and the NHL Players’ Association (NHLPA) announced April 11 they would be partnering with the You Can Play Project as part of an initiative designed at making the NHL one of the most LGBT-inclusive professional sports leagues in the world. 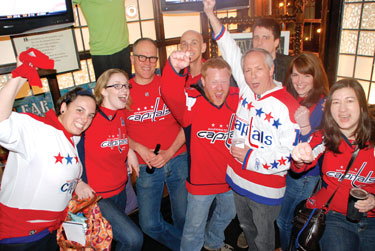 By agreeing to the partnership, the NHL and players’ association will dedicate resources to education and training for teams, players, media and fans, and will produce and broadcast public service announcements promoting LGBT inclusion in sports. In turn, the You Can Play Project will conduct educational seminars at the NHL’s rookie symposium and will make its resources and personnel available to individual teams upon request. The NHL and NHLPA will also work to integrate the project into their Behavioral Health Program, which will allow players to confidentially seek counseling or answers to questions related to sexual orientation.

The announcement of the partnership with the NHL and NHLPA – two parties often at odds and who most recently clashed over the renegotiation of a collective bargaining agreement that delayed the start of the 2012-2013 season by three months – marks a significant commitment by all major stakeholders to advancing the goals of You Can Play, a nonprofit organization that seeks to ensure athletes have a fair chance of competing in sports, regardless of their sexual orientation.

For Patrick Burke, an NHL talent scout for the Philadelphia Flyers and cofounder of You Can Play, it’s also a significant achievement just a little more than a year after You Can Play was launched, March 4, 2012. Burke, the son of former AHL player and Toronto Maple Leafs general manager Brian Burke, was inspired to found the organization following the 2010 death of his younger brother, Brendan, an athlete and student manager for the Miami University RedHawks men’s ice hockey team who had come out as gay on ESPN.com and had been an advocate for greater LGBT inclusion in hockey.

In an April 19 interview with Metro Weekly, Burke said the partnership between You Can Play, the NHL and the players’ association erases the hypotheticals that many gay athletes face concerning how they may be received if their sexual orientation becomes public.

”The most important thing to me is now there’s no more doubt,” Burke said, noting that acceptance goes beyond the players on the ice. ”We’ve removed that. The NHL and the NHLPA are officially LGBT-supportive. Whether you’re a player, a coach, a fan, a media member, management, whatever your role in the NHL, the NHL and the NHLPA officially support you.”

Burke said he expects the partnership to accomplish two things: promote an ongoing culture shift in LGBT acceptance in the sports world, and provide educational resources and outreach to players moving up through the ranks to help them adopt the mindset needed to foster that acceptance in hockey.

When asked why hockey seems a more welcoming arena for LGBT players and fans, Burke said the international diversity of the sport and the sense of community in hockey help foster respect for fellow players and fans, regardless of their sexual orientation.

”There are no casual hockey fans,” he said. ”You’re either passionate about hockey or you’re not. We are a culture that is very tight-knit. There’s a bond that forms from being hockey players and hockey fans, and just in hockey culture in general, where we look out for each other.”

Burke also said his brother was able to find that sense of community through his involvement with hockey when he was at Miami University.

”In Miami’s hockey program, they call themselves the ‘brotherhood,”’ Burke said. ”They take it very seriously that when you’re part of the Miami hockey family, you are brothers. And Brendan was very lucky to find a group of people who loved him and cared about him. And when he came out to them, they couldn’t have cared less.”

Burke said he believes the underlying acceptance of LGBT people is already in place in the wider hockey community, with many hockey players willing to support an out gay teammate. Where the education and outreach needs to be done, he says, is in ending the use of anti-gay slurs during the heat of competition or in the locker room.

John Riley is the local news reporter for Metro Weekly. He can be reached at jriley@metroweekly.com
← Previous Story DC Health Clinic Now Recommending Meningitis Vaccination for Some Gay and Bi Men
Next Story → Allegations Aimed at Anne Arundel Police Chief