And now for a few random thoughts on Jurassic Park 3D

On Friday night, a friend texted that he was off to see Jurassic Park 3D. The following morning, his general assessment was positive enough that, on Saturday night, I decided to take the plunge and see a film I’d not watched since reviewing it in 1993 for the Times Newspapers of Virginia. I recall liking it at the time, but my archival system for my reviews prior to the internet is rather cumbersome, not to mention flammable, as it’s comprised of piles of old newspapers crammed in boxes. I caught Jurassic Park 3D at The Uptown, D.C.’s last remaining movie palace. The Uptown even has a glorious, spacious balcony. Yet if you want total screen immersion, sit downstairs in row two and stare up until your neck goes numb. (I spent a third of JP3D in the balcony and a third in row 2, returning upstairs for the climax — mobility without fuss is the kind of thing that makes going to the movies alone worthwhile.) 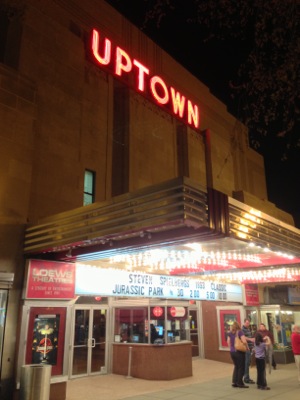 Anyway, I’m happy to report The Uptown is as palatial as ever. It’s a real landmark in Washington, and if you don’t live here and ever visit, and all you’re accustomed to in your own moviegoing experience are multiplexes with commercial IMAX screens (it’s not real IMAX, folks — for that, hit up the Smithsonian), you owe it to yourself to experience a movie there. (The same could be said for the Ziegfeld in NYC.) One day perhaps, we’ll get into the ins and outs of movie theaters, what to look for, where to sit, how to get the best aural experience, but not today, today we’re here to talk about Jurassic Park 3D.

It’s a masterfully crafted film, of course, with director Steven Spielberg at his absolute best in terms of pacing. It helps that he’s working from magnificent source material. The late Michael Crichton was always a bit hit or miss, but Jurassic Park remains one of his better efforts at blending thrills, character, situation, and science that sounds remotely plausible if vastly improbable. True, we didn’t get the pterodactyls until the woeful Jurassic Park 3 — a pity, really, as it would have been nice to see what Spielberg would have done with that memorable sequence from the novel. The film holds up surprisingly well, even by today’s frenetic moviemaking standards, where everything is edited to the point where you’d think all editors are fired up on Red Bulls and crystal meth.

The individual set pieces are marvels of showmanship and construction — and it’s sometimes those that don’t involve dinosaurs that provide the best edge-of-seat thrills: young Tim paralyzed by fear on the 10,000 volt perimeter fence moments before it’s reactivated, Tim and Dr. Grant’s mad dash down a tree to avoid being crushed by a Ford Explorer in tumbling pursuit. Naturally, I noticed things after 20 years that I’d forgotten about — obvious things, like the fact that the opening sequence is a deliberate nod to the start of Jaws, or that the chaos on the island is caused by a Macguffin (Wayne Knight’s incompetent pursuit of the dinosaur embryos in the name of corporate espionage). I also noticed how little a role Jeff Goldblum actually had — and, surprisingly, found I didn’t mind, as I’ve sour on his affected acting style. His performances have not aged well — they seem deliberately off-putting (though not as off-putting as Nicolas Cage’s). There’s something archaic about Goldblum.

On the other hand, I really enjoyed reacquainting myself with the fabulous acting chops of Laura Dern and Sam O’Neill, who gives a truly graceful, understated performance as Dr. Grant. I was gleefully surprised to see a young Samuel L. Jackson, before he went on to become a far more polished screen presence. And if you’re looking for a gay nod, how’s B.D. Wong’s brief but engaging appearance as a lab technician in the egg hatching sequence? True, we don’t know the sexuality of the technician, but we sure know Wong’s, and that’s close enough. And has any actor had a more powerful set of gams than the late Bob Peck, who plays the steely game warden Robert Muldoon? Peck’s muscle-bound thighs were likely paid individual bonuses at the time.

As for the various dino-encounters, the velociraptor climax was far less thrilling than I originally remember. I found myself focusing more on the sequence’s choreography rather than giving into its visceral thrills. It left me cold, surprisingly. But the initial, thundering T-Rex attack remains as gripping as ever. It’s one of the best sequences Spielberg has ever committed to film, in part because the peril feels immediate and authentic. The whole attack has a chaotic, nonstop feel, and charges at you like a — well, like a T-Rex. There’s some brilliant CGI in the sequence — groundbreaking effects that forever changed the face of movies — but Spielberg was also smart not to abandon physical objects in the creation. When the T-Rex pushes through the plexiglass top of the car in an attempt to get at some kiddie McNuggets, it’s a real tangible creation, not something added later by computer, and the result is heart-stopping and breath-halting.

Jurassic Park wasn’t originally shot for 3D, so there’s not much in the way of jump-out-of-the-screen effects, though there is that jolting moment near the end where a velociraptor, momentarily stunned, leaps right at the audience. Spielberg’s de facto compositional style — framing a larger object to the left or right side and then staggering other objects into the distance — seems to beg for 3D. In fact, you could almost say he was making 3D movies before 3D movies became a thing.

I’ll admit, the 3D adds a certain presence — I particularly enjoyed shots where the foliage took front and center, grass swaying in the foreground at times made me gasp — but I would have been just as happy to see the film on the big screen without the added “dimension” — or cost. Fifteen dollars seems steep for a film this old, and one that you can easily rent on Netflix. Perhaps that’s why the theater was only a quarter full on Saturday night. When all was said and done, I’d spent $25, and that price included a small bottled water and a medium popcorn with butter-byproduct.

(An aside: at The Uptown, you are now required to operate the butter-byproduct drenching mechanism yourself. Apparently, the staff can’t be bothered to do it for you any longer, because they’re too busy asking you if you want butter and then pointing you to the device that dispenses it. Access to a popcorn butter-byproduct pouring device is a very dangerous thing to have, as self-control tends to vanish altogether and you find yourself returning to the device whenever the popcorn seems a wee bit on the less-than-soaked side. Perhaps an act of Congress banning this device is required, as it’s tantamount to shooting yourself in the heart.)

So, despite the high admission price, ultimately Jurassic Park seems deserving of the 3D enhancement. Now the question is, what Spielberg film should be released in 3D next? And bear in mind both the Indy Jones saga and Close Encounters are currently in process, the first for release in theaters, the second for release on BluRay, but I’ve left them as official choices in this quick, concluding poll. Take it if you have a second — I’m sure Hollywood is eager to know what you’ll pay $15 for next.

Randy Shulman is Metro Weekly's Publisher and Editor-in-Chief. He can be reached at rshulman@metroweekly.com.
← Previous Story WPA’s Options 2013 opens this Saturday, April 13
Next Story → Shulman’s Picks: 4 things you could be doing in D.C. this weekend!