Latest ENDA effort greeted with both optimism and skepticism 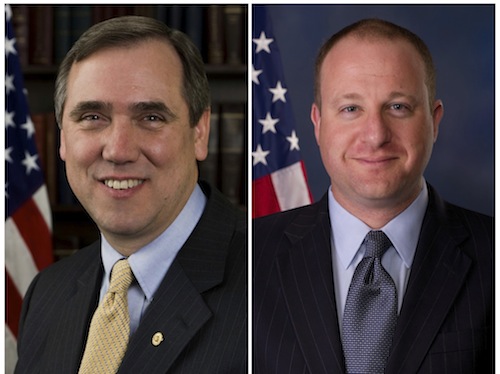 Hopes are high as the long-stalled Employment Non-Discrimination Act (ENDA) will see reintroduction in the Senate and House of Representatives on Thursday. After years of obstruction, supporters are hopeful this time will be different, but the reality of a politically divided Congress has not been lost on proponents of one of the last major pieces of LGBT-rights legislation.

During separate interviews with Metro Weekly this week, the two champions of ENDA in the Senate and House — Sen. Jeff Merkley (D-Ore.) and out Rep. Jared Polis (D-Colo.) — expressed optimism that ENDA will see its strongest show of support ever after the bill is introduced Thursday. ENDA has been introduced in every session of Congress except one since 1994, and Merkley and Polis have assumed roles once occupied by former Sen. Ted Kennedy and former Rep. Barney Frank.

“The bottom line is no worker in America should be fired or denied a job based on who they are. Discrimination is wrong. Period. And I think the Senate is ready to take that stand,” said Merkley.

ENDA will be introduced in the House and Senate with bipartisan support. Merkley will be joined by Sens. Mark Kirk (R-Ill.), Susan Collins (R-Maine), Tom Harkin (D-Iowa) and Tammy Baldwin (D-Wisc.) as original sponsors of the bill. In the House, Polis and Republican Rep. Ileana Ros-Lehtinen (Fl.) will introduce the bill. If approved by both chambers, President Barack Obama would sign the bill into law, thus prohibiting workplace discrimination on the basis of sexual orientation or gender identity nationwide.

ENDA may receive quick action in the Senate, with a markup of the bill by the Health, Education, Labor and Pensions Committee expected in the next few months.

“It’s my priority, I think it’s the No. 1 on my committee priority and we’re going to move it,” Harkin, who chairs the committee, recently told Metro Weekly.

Should ENDA reach a vote on the Senate floor, a promise Majority Leader Harry Reid (D-Nev.) has previously made, it would be the first time the chamber has considered such legislation in 17 years. The Senate fell just one vote shy of passing ENDA in 1996. Merkley said he has reached out to a number of his colleagues who have not ruled out supporting ENDA this time around, including Sen. Rob Portman (R-Ohio).

“I have talked with Sen. Portman and the conversation was simply that he’d be interested in continuing the conversation,” Merkley said. Although Portman has not sponsored ENDA in the past, in March he became the first Senate Republican to endorse marriage equality after learning his son is gay.

However, many believe the real battle will come in the House, where Republican leadership has opposed ENDA and given no indication it will bring the bill to the floor for a vote.

“I fully expect this session ENDA will have more support than ever before,” Polis said, echoing Merkley’s belief that there is a “very good chance” of having the 60 votes for passage in the Senate. Polis, who is now the most senior LGBT member of the House, believes that by increasing bipartisan support for ENDA they will be able to pressure House leadership to bring the bill for a vote.

Despite Polis’s optimism, many remain skeptical about ENDA’s prospect in the House. According to Baldwin, the Senate’s first out member who served seven terms in the House and also sits on the Senate HELP committee overseeing ENDA, she does not yet see a clear path to passage in the House.

“I have to say, given the current leadership composition of the House, I don’t think it goes anywhere,” Baldwin recently told Metro Weekly. While the House did pass an LGBT-inclusive Violence Against Women Act in February, Baldwin says she fears that may be an exception to the rule, “which is if they don’t have a majority of the majority caucus supporting something they’re not going to let it to the floor. And I don’t see that changing in the near future.”

Even with no clear path to passage in the House, advocates maintain a vote in the Senate after nearly two decades of delay as being key to the future of the bill. “Seventeen years is an absurdly long delay between Senate votes on ENDA,” said Tico Almeida, president of Freedom to Work. “It’s time to put all 100 Senators on the record about whether they believe LGBT Americans should work in fear of getting fired just because of who they are or who they love.”

Should the Senate pass ENDA, Almeida says Polis and Ros-Lehtinen could subvert obstruction by Republican leaders by launching a discharge petition. Such a move would be a rare legislative procedure, but if 218 signatures are collected they would be able to bring the bill to a vote without the approval of House leadership.

“We could ride the momentum from a Senate victory with an organizing campaign to get House members to sign that petition allowing for a vote of the full House of Representatives,” Almeida said.

[Photos: Jeff Merkley (left) and Jared Polis (Courtesy of the U.S. Senate and the U.S. House of Represenatives)]