10 of the best first-person shooters 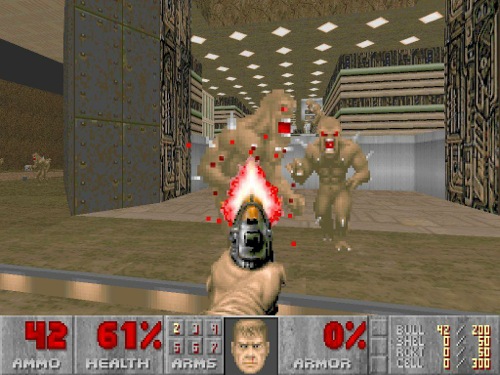 I still remember the first time I played Wolfenstein 3D. “What fresh hell is this?” I exclaimed as I gleefully mowed down marauding, bitmapped Nazis and various mutants, inevitably coming face-to-face with Hitler himself, wearing some type of tunic and hurtling deadly fireballs. Widely acknowledged as the initial first-person shooter (FPS), Wolfenstein 3D was developed in the early ’90s by the now-iconic id Software (for a great read on the history of id and its founders, check out David Kushner’s magnificent Masters of Doom).

Over time, the FPS genre evolved spectacularly — there are so many game changers out there that it’s impossible to pinpoint all the landmarks. Yet, games such as Doom and Quake, Halo and Far Cry, Call of Duty and Spec Ops, and yes, even Goldeneye 007, pushed the FPS to where it is today, into a vibrant new realm that includes mesmerizing titles such as Bioshock Infinite, allowing for an emotional richness that surpasses even today’s norm. As Metro Weekly video game critic Rhuaridh Marr writes in his recent five-star review:

A game this incredibly complex demands more than mere adulation and criticism. It demands in-depth analysis, long conversations with friends who’ve also experienced it, hours spent scouring internet forums trying to gain further insight into the game’s backstory and plot. Infinite isn’t just another FPS, and it isn’t just another adventure game. It’s a world, a lifestyle, an entity so consuming and engrossing that it absorbs the player into its narrative and doesn’t relinquish them to their lesser reality until the final credits start to roll. The last half hour, which is all story and follows on from the game’s biggest battle sequence, is astonishing. A mind-blowing, gut-wrenching, puzzling, wondrous, ruinous ending that left me staring at the screen in disbelief. I finished the game physically and emotionally drained, and yet still I wanted more. I wanted to return to the world that Infinite presents and find more, do more, see more. It’s an intoxicating elixir of rich backstory, deep character development, incredible writing, beautiful graphics, exciting gameplay and an ending that will continue to haunt you long after you’ve turned off your console.

We’ve culled ten of what we believe to be the finest first-person shooters in the history of gunnery gaming. And we want to hear from you to declare a winner. Take a moment and rank them, with 1 being your favorite. We’ll close the poll in a couple weeks or so and clue you into the results.

And then, pop over to wolfenstein.com, where you’ll find a fully playable, level-by-level version of Wolfenstein 3D online. It just makes you want to cry out with joy, “Die, Fuhrer, die!”