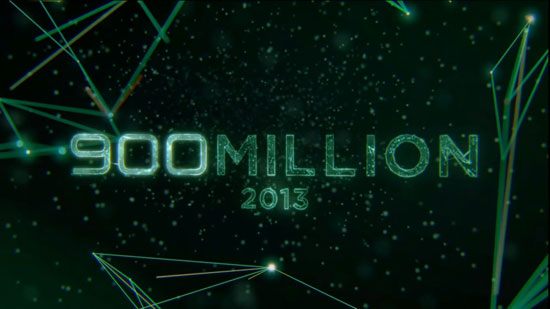 At last year’s I/O conference, Google touted 400 million Android devices as having been activated around the globe — a number which has now more than doubled. That’s 1.5 million devices per day. Since last June, 18 people every second have activated an Android device. It’s growth that even Apple can only marvel at, and goes a long way to explaining Android’s 74% share of the smartphone market.

Google also touted 48 billion app downloads from its Google Play app store, formerly known as Android Market, with 2.8 billion of those in April. Revenue generated by app downloads is up almost 2.5 times that of last year, which should help developers pay greater attention to their Android products — something they’ve been sluggish to do, given Apple’s dominance of the lucrative mobile app market.

All that remains is for Google to sit back and wait for Android to reach the magical 1 billion mark — which, to put it in perspective, would give them one-seventh of the world’s population in Android devices activated.