Throughout his life, 26-year-old Joseph Lewis has struggled with embracing the different facets of his identity – as a gay man, a deaf person and an adopted son. He’s also refused to allow life’s obstacles to deter him from achieving his goals.

Born in South Korea to a single mother who placed him for adoption, as a small boy Lewis joined an Iowa family with 14 other children, including two other brothers who are deaf. 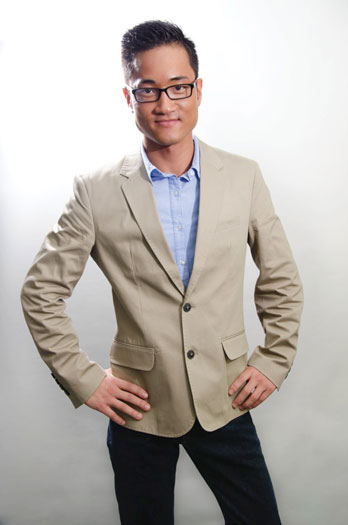 ”I feel like I’ve had a very positive upbringing with my family, even though I am a minority and my hometown is less than 5 percent Asian,” he says. ”I was definitely the odd one out.”

After learning sign language and literacy skills, Lewis attended public school with his own interpreter, but later joined his brothers at the Iowa School for the Deaf to connect with other deaf people – nearly five hours from home. Even there, however, fitting in was difficult.

”I was brought up with Signed Exact English (SEE),” Lewis explains. ”It’s not really recognized by the deaf community. At the Iowa School for the Deaf, it was very much an ASL (American Sign Language) community. People looked at me and said, ‘You can’t sign.”’

Despite that rough start, Lewis mastered ASL and excelled in academics and extracurricular activities. He did particularly well in speech competitions, placing first at local, state and regional levels.

That foundation paved the way to D.C. and Gallaudet University, where he earned a degree in government. That work also landed Lewis a 2009 spot as an intern for his state’s Sen. Tom Harkin, allowing him access to congressional hearings for the Matthew Shepard and James Byrd, Jr. Hate Crimes Prevention Act and the confirmation hearings of Supreme Court Justice Sonia Sotomayor. He topped that placement with an internship at the White House.

Walking the halls of power, however, left Lewis feeling a need to be more engaged in community. So, after graduation, he served as a volunteer for Public Allies, an AmeriCorps program, then with AmeriCorps directly as a computer literacy instructor for low-income deaf/hard-of-hearing District residents.

Now a correspondence specialist at the U.S. Department of Labor for the Office of Federal Contract Compliance Programs (OFCCP), Lewis is involved with overseeing whether federal contractors are compliant with equal-opportunity hiring guidelines for veterans, the disabled and minority populations. But he still finds time to volunteer at the White House helping sort through correspondence, and with The DC Center’s HIV Working Group packing safer-sex kits.

From South Korea to Iowa to D.C., Lewis’s identity has expanded, and he says he’s comfortable with all of it: gay, deaf, Asian, a Pentecostal Christian and a Democrat. He grants, however, that he’s the ”black sheep” of his conservative Republican family, and that his parents are still not fully comfortable with his sexuality, though he’s been out for several years.

”They have their own vision of what success means for their children,” he reasons. ”When it doesn’t match up, it’s a shock.”

Lewis learned that just before a recent trip home his parents questioned one of his brothers to find out if he was still gay.

”My brother actually stood up for me and said, ‘Yeah, he’s successful, he’s got a great job, he’s enjoying his life, so why would you criticize him and his sexuality?”’ Lewis recounts. ”It was just taboo. But, eventually, I do want to get married, I do want to have children. So my parents are going to have to accept it. Or don’t accept me.”

As Lewis and his parents continue that journey, there is plenty to keep Lewis – a self-described ”political geek” – occupied in D.C. He has about 700 Twitter followers joining him on the political journey, where he tweets as @AsianGlowJoe.

”If there’s something that’s bothering me, I will let people know my opinion,” he says. ”To my surprise, I’ve actually been re-tweeted. It’s funny, actually, because Karl Rove is following my tweets. I was trying to figure out why, since he’s a Republican, but it’s interesting.”

”I’m up for any challenge,” he says of a future run for office. ”I think my life experience shows I’m used to challenges, I like challenges. I feel it’s all about tailoring my vision and making sure I present ideas that make a better place, that provide a better opportunity for everybody.”

Aside from his own political ambitions, Lewis says he would love to work for Hillary Clinton’s presidential campaign, should she run in 2016. He says he would ”give his life” to work on that campaign, and believes Clinton could be competitive in his home state in the general election.

For now, though, Lewis is focused on smaller goals. First, he’d like to earn at least a 155 on his LSATs. Second, he’d like to gain Chelsea Clinton as a Twitter follower.

”We have such similar personalities,” he says. ”Just from everything I’ve read about her, we’re very much alike.”