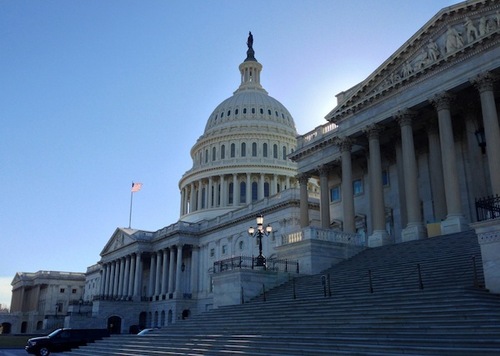 Amid reports that comprehensive immigration reform could be derailed if protections for binational same-sex couples are included in the final bill, LGBT-rights activists are demanding Congress side with inclusion.

“The idea that lesbian and gay couples are the barrier to a bipartisan immigration reform agreement is an offensive ruse designed to distract attention away from the failings of Congress — a body that refuses to come together on popular and common-sense solutions to a host of our country’s problems,” said Human Rights Campaign President Chad Griffin in a statement released yesterday.

In a separate statement from the National Center for Lesbian Rights, GLAAD, National Gay and Lesbian Task Force, United We Dream and Queer Undocumented Immigrant Project, activists questioned the sincerity of some conservative supporters of immigration reform who have warned of doom for the legislation should same-sex couples be included.

“We do not believe that our friends in the evangelical faith community or conservative Republicans would allow the entire immigration reform bill to fail simply because it affords 28,500 same-sex couples equal immigration rights,” the five groups wrote in a statement. “This take-it-or-leave-it stance with regard to same-sex bi-national couples is not helpful when we all share the same goal of passing comprehensive immigration reform that provides a path to citizenship.”

The Senate immigration bill unveiled by a bipartisan group of eights senators last month did not include provisions for same-sex couples, despite a fierce push from advocates and the backing of President Barack Obama. Under the Defense of Marriage Act, foreigners in relationships with Americans of the same-sex are denied various protections, including eligibility for green cards, because the federal government does not recognize such relationships. According to the Family Equality Council, there are more than 36,000 binational same-sex couples living in the United States today. Nearly half of them are raising children. Without recognition of same-sex relationships in deportation proceedings, many of these families risk being torn apart.

Nevertheless, supporters of an LGBT-inclusive immigration bill have said they will amend the legislation in the Senate Judiciary Committee as early as next week.

Advocates have said they have received assurances that Sen. Patrick Leahy (D-Vt.), the chairman of the Judiciary Committee, will tack on the Uniting American Families Act (UAFA) as an amendment to the 844-page immigration bill. UAFA would recognize immigrants in relationships with Americans of the same-sex and grant them various protections, including eligibility for visas. The deadline to file amendments is May 7, with activists anticipating a vote on the UAFA amendment the week of May 13.

On Tuesday, several news organizations, including The New York Times, BuzzFeed and Politico, reported the push to include same-sex couples is still expected to face pushback from Senate Republicans who believe such provisions will jeopardize immigration reform.

“There’s a reason this language wasn’t included in the Gang of Eight’s bill: It’s a deal-breaker for most Republicans,” Sen. Jeff Flake (R-Ariz.), a member of the “gang of eight,” said in a statement to The New York Times. “Finding consensus on immigration legislation is tough enough without opening the bill up to social issues.”

Speaking to Politico, Sen. Marco Rubio (R-Fla.), another member of the “gang of eight,” also said such provisions would derail immigration reform. “It will virtually guarantee that it won’t pass,” Rubio said. “This issue is a difficult enough issue as it is. I respect everyone’s views on it. But ultimately, if that issue is injected into this bill, the bill will fail and the coalition that helped put it together will fall apart.”

According to HRC’s Griffin, such statements are exaggerated and fail to capture the nation’s continuing embrace of equality for LGBT people.

“This bluster is nothing more than a political maneuver designed to divide the pro-reform coalition and at the same time appease a small but vocal group of social conservatives that will do anything to stop progress for lesbian and gay couples,” Griffin added. “The LGBT community will not stand for Congress placing the blame of their own dysfunction on our shoulders.”

Although Obama is a supporter of UAFA and has argued same-sex couples should be included in immigration reform, he has not gone so far as to call on Congress to insert protections for same-sex couples since the Senate bill was introduced.

Speaking to reporters on Air Force One during the president’s trip to Mexico earlier today, White House press secretary Jay Carney reiterated that the Senate bill “broadly reflects the principles that the President has laid out, but it is not word for word in keeping with all of what he would do if he were to write it himself.”

“And we have said that we support that provision, but we also think it’s very important to recognize that the overall bill here accomplishes what the President believes needs to be accomplished and is in keeping with his principles,” Carney said. “As this process moves forward, we’ll be working with the Senate every step of the way. But the bill as written is a sign of significant progress.”