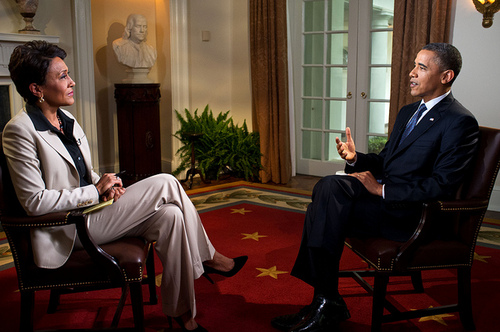 When Barack Obama sat down with Robin Roberts of ABC News on the afternoon of May 9, 2012, many knew what the president was going to say.

Three days earlier during a May 6 appearance on Meet the Press, Vice President Joe Biden had become the highest-ranking member of the Obama administration to endorse marriage equality.

Asked by David Gregory if he was comfortable with same-sex marriage, Biden responded, “I am vice president of the United States of America. The president sets the policy. I am absolutely comfortable with the fact that men marrying men, women marrying women, and heterosexual men and women marrying another are entitled to the same exact rights, all the civil rights, all the civil liberties. And quite frankly, I don’t see much of a distinction beyond that.”

What ensued was a feverish attempt by the White House to maneuver around Biden’s remarks and make clear that they did not necessarily reflect Obama’s, who supported civil unions but had repeatedly said he was “evolving” on the issue of marriage equality.

“I can tell you that I’m sure it is the case that he will be asked again at some point when he gives interviews or press conferences about this issue, and I’ll leave it to him to describe his personal views,” White House press secretary Jay Carney told reporters in the days following Biden’s Sunday show appearance.

One year ago today, Obama got a chance to describe those views.

“At a certain point I’ve just concluded that for me, personally, it is important for me to go ahead and affirm that I think same-sex couples should be able to get married,” Obama told Roberts, securing his place as the first sitting president to publicly endorse the right of same-sex couples to marry.

No one knew how Obama’s endorsement of marriage equality would play. It was a few months before an election, and while the Democratic Party had largely embraced marriage equality, it was by no means the position of the party. Just one day earlier, North Carolina became the 31st state to approve a gay-marriage ban. Moreover, a survey Obama signed as an Illinois State Senate candidate in which he declared his support for marriage equality, suggests Obama ran opposed to same-sex marriage in 2008 for political purposes.

Writing in an issue of Newsweek that declared Obama the “first gay president,” gay conservative blogger Andrew Sullivan said he was braced for disappointment when Roberts asked the president if his views on marriage equality had changed.

“And yet when I watched the interview, the tears came flooding down,” wrote Sullivan, who, in 1989, brought the case for marriage equality to newsstands everywhere with his landmark New Republic cover story. “The moment reminded me of my own wedding day. I had figured it out in my head, but not my heart. And I was utterly unprepared for how psychologically transformative the moment would be. To have the president of the United States affirm my humanity — and the humanity of all gay Americans — was, unexpectedly, a watershed.”

One year later, there is little question that it has helped Obama rather than hurt him as momentum for marriage equality has reached heights largely unimaginable just a few years earlier. On the same day Obama was re-elected with 76 percent of the gay vote, which made up 5 percent of the electorate in 2012, voters for the first time approved marriage equality at the ballot box in Maryland, Maine and Washington. In Minnesota, voters struck down the same kind of gay marriage ban North Carolina voters had approved months earlier. Polls indicate a slim majority of Americans now support marriage equality, with overwhelming support among Americans younger than 30.

“The president welcomes the progress we’ve seen in the evolution of the hearts and minds of the American people on the issue of equality for the LGBT community,” White House spokesman Shin Inouye told Metro Weekly. “As he has said before, change like this won’t be led by people in Washington, but by Americans across the country.”

Obama’s support was also an irrevocable moment for his party, all but ensuring no viable candidate for president will ever again be able to run for the Democratic nomination without supporting marriage equality. Indeed, two of the front-runners for the Democratic nomination in 2016 — Govs. Andrew Cuomo of New York and Martin O’Malley of Maryland — both signed marriage-equality legislation into law.

“Of all the successes that Freedom to Marry has had in the last 10 years, one that I’m especially proud of is having paved the pathway for the president to come out and support, because I think it was a real inflection point in our movement,” Evan Wolfson, the founder of Freedom to Marry, told Metro Weekly.

Wolfson is the architect of the modern marriage-equality movement and founded Freedom to Marry a decade ago as President George W. Bush was campaigning for re-election on a platform that supported amending the U.S. Constitution to ban same-sex marriage.

“At that time all we wanted from the current president and federal government was nothing. Stay away from it and stop attacking,” Wolfson said. “Thanks to the way the American people are rising to fairness, we’re now at a time when doing the right thing is also happily the right thing to do politically. And even when people don’t fully agree with an elected official, they respect authenticity and commitment and leadership.”

Many believe Obama’s endorsement, and the way in which he described his reversal on this issue as coming from talks around the dinner table with his children, opened the door for politicians to do the same.

In March, Rob Portman of Ohio became the first Senate Republican to openly endorse marriage equality after learning that his son is gay. Better known for his focus on fiscal issues, Portman faced criticism from some for only coming to his position after it directly impacted someone close to him. “That’s how most of us change our mind on this issue,” Portman said Monday during an event with BuzzFeed, seeming to mirror the president’s evolution.

The landscape on this issue continues to change rapidly. Earlier this month, lawmakers in Rhode Island and Delaware approved same-sex marriage legislation as well, with states like Minnesota and Illinois expected to follow suit. Next month, the Supreme Court will rule on the constitutionality of DOMA and California’s gay-marriage ban, leaving open the possibility of a ruling that strikes down state marriage bans nationwide. Although the Obama administration stopped defending DOMA in February 2011 before the president’s same-sex marriage endorsement, it is highly unlikely the Justice Department would have filed a brief in the Proposition 8 case were it not for the president’s endorsement.

“In a very large and compelling way it is partly responsible for the moment we now enjoy,” HRC vice president Fred Sainz said of Obama’s endorsement. “I’m careful not to give his endorsement all of the credit. Certainly this is a movement that has been going on for 20 years. But it builds on everything that we have achieved to date and I do believe it was incredibly momentous.”

Speaking to reporters March 1, the day after the administration’s brief was filed in the Proposition 8 case, Obama elaborated further on his views. Previously, he had said states should be left to decide this issue. But in the White House briefing room, he went further than he had ever gone before, stating that he believes state bans on same-sex marriage are unconstitutional.

“What we’ve said is that same-sex couples are a group, a class that deserves heightened scrutiny, that the Supreme Court needs to ask the state why it’s doing it. And if the state doesn’t have a good reason, it should be struck down,” Obama said. “Now, the court may decide that if it doesn’t apply in this case, it probably can’t apply in any case. There’s no good reason for it. If I were on the court, that would probably be the view that I’d put forward. But I’m not a judge, I’m the president.”