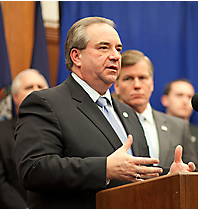 “These kinds of comments are simply not appropriate, especially not from someone who wants to be a standard bearer for our party and hold the second highest elected office in our state. They feed the image of extremism, and that’s not where the Republican Party needs to be. … Bishop Jackson is certainly entitled to his views, but you should be able to express your views without insulting people, and some of the things he has said are simply indefensible.”

Lt. Gov. Bill Bolling (R), in a statement to Politico regarding comments on gays, race and abortion made by E.W. Jackson, a conservative pastor who won an upset victory at Virginia Republican Party convention Saturday becoming the party’s nominee for lieutenant governor. Jackson has made several anti-gay comments, including linking homosexuality to pedophilia and calling gays and lesbians “perverted,” “degenerate” and “very sick” people. (Politico)