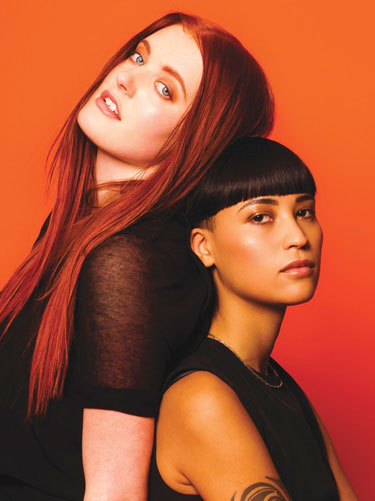 JAWO: Not at least now. And we’ve been hanging out —

HJELT: — for four years. And we’ve been sharing a bed in London, and in Sweden. I think it’s because we have such huge respect for each other.

HJELT: It’s just very [comfortable]. If you’re having a day where you don’t feel like talking, we can hang out for three days without talking. And sometimes we’re talking all the time. It’s all about feeling each other’s energies, and having a lot of respect for each other. We never fight. We can discuss stuff.

MW: Well, obviously with your career the way it is right now, it’s hard to have a love life. But it sounds like it’s probably also hard because you’re always together. It makes it difficult. Are you able to find time for dates?

HJELT: The only thing we’re not sharing is a guy! [Laughs.]

JAWO: Yeah. I would say the same. We do — you make time for love. If you find someone, which we’ve done a couple of times, sometimes it doesn’t work out, but you make time. And of course it’s hard because you’re never at the same place [very long].

JAWO: Definitely one day. But now I would feel trapped. I love babies and children. But not right now.

HJELT: No, now is not the time. But in the future, when things might be a little bit more calm, and I have my shit together, then I’m going to have kids.

JAWO: A lot of babies!

HJELT: Yes. But we’ll have to have them at the same time: between albums. [Laughs.]

MW: Can either of you imagine doing this without the other?

JAWO: No, that’s not an option. I’m so happy that Caroline is with me because there are so many times when we only have each other, and we can always discuss anything. And I’m just so happy that we’re doing this together.

HJELT: — imagine doing it without Aino.

HJELT: When it’s fun stuff as well. [But] especially, I mean, when you’re going through something that is just so hard for other people to understand, then you have each other and you can talk about it — like, do you remember that time when we met that crazy blah-blah-blah, fill in the words. You have someone to share it with.

MW: You’re describing your relationship as if you were each other’s life partner, even soul mate.

HJELT: Yeah, but it is like that. It’s a very functional relationship. [Laughs.] It’s very healthy.

HJELT: It’s not sexual though.