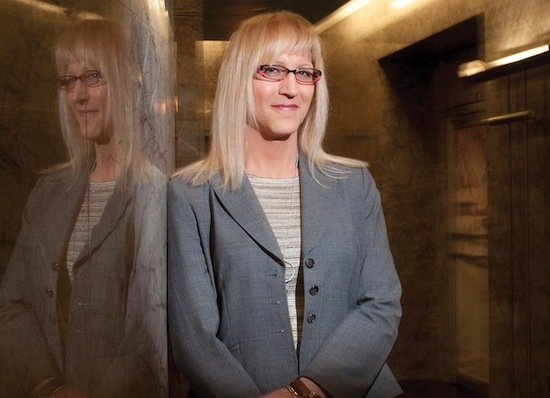 Following more than 24 hours of turmoil that appeared to threaten to break apart the nation’s largest LGBT military organization, Allyson Robinson said Monday evening that she will step down as OutServe-SLDN’s executive director at a date of her choosing after a tumultuous board vote calling for her resignation that led to number of people affiliated with the organization to quit in protest.

This weekend’s events were most unfortunate and deeply troubling for many of us, but for my part, as from the beginning of my tenure with this organization, I am fully and firmly committed to our LGBT service members, veterans, and their families and to their fight for equality. For that reason, and to honor those who’ve shared those values with me, it is my intent to continue to lead OutServe-SLDN in the near term as we approach an historic moment for our community and our country. After that, at a date to be determined, I have decided of my own accord to step down, and will work with our members to ensure an orderly transition to the next phase of this organization’s life.

Very few people ever get the opportunity in this life to hear from those whose lives they’ve touched just how much they are loved and respected. I have no words to express my gratitude for the hundreds who have reached out to me privately or stood up for me publicly over these last 24 hours to show their support: from the military community, the LGBT community, and most especially, most dear to me, the troops of OutServe-SLDN and their families. For that, I am blessed beyond measure.

In light of the momentous events the coming days hold for us all, I intend to put this matter behind us and look forward to shifting the focus back to where it belongs: our LGBT service members, veterans, and families, who sacrifice so much every day, and their ongoing fight for full equality.

In a separate statement released minutes later, the organization’s board of directors promised to work with Robinson until she leaves her position.

This past Saturday an email containing the contents of confidential internal discussions of the OS-SLDN Board of Directors was erroneously distributed to an email list containing recipients outside of the Board of Directors. The board would like to clarify that the drafted item was only part of a series of discussions aimed at transitioning the organization in what has been a rapidly changing financial and political landscape facing the LGBT movement, which will soon include a Supreme Court decision on the constitutionality of the Defense of Marriage Act. As is the case with many of our partners at this critical time, OS-SLDN is facing real and significant financial obstacles, forcing the Board to look critically at all aspects of its operations and to consider difficult decisions, including cutting costs and staffing reductions.

Board Co-Chair, Josh Seefried, stated, “There is no excuse for the series of events that transpired this past weekend. On behalf of the Board of Directors, I sincerely apologize for this as well as the impact it’s had on our staff’s and members’ trust and confidence in the organization. Allyson Robinson has led OutServe-SLDN as one of the most transformational leaders of this movement, and there is not a member serving on this board who does not respect and admire her work for this organization and the LGBT movement.”

“Allyson has continually put our LGBT service members, veterans, and their families first in the changes the organization has faced since the repeal of DADT,” stated co-chair April Heinze. “As many in our community know, the LGBT movement is evolving quickly, and so will its institutions. Many people thought that after the repeal of ‘Don’t Ask, Don’t Tell’ all the military LGBT organizations would or should disappear. As Allyson Robinson and her staff have so powerfully and effectively reminded the nation, the mission for full equality in our Armed Forces is incomplete.”

Robinson, a 1994 graduate of West Point, has led OutServe-SLDN through some of the movement’s most significant victories since the repeal of DADT, including the public vetting of Chuck Hagel for the office of Secretary of Defense, the highlighting of ongoing discrimination against gay and lesbian military families at Ft. Bragg and elsewhere, and the extension of non-DOMA restricted benefits to same-sex military partners. She has worked tirelessly to put military families at the center of the discussion of the Defense of Marriage Act and has become the nation’s leading advocate for transgender inclusion in the military.

In light of these events, the board and Allyson will be working together toward a successful transition of the organization. Allyson will continue to serve as Executive Director throughout this period.

OS-SLDN operations and planned events, unless explicitly noted, will continue as planned to include the 2013 OutServe-SLDN Leadership Conference which will be held in San Antonio, Texas in October.

On Sunday morning, The Bilerico Project first reported that Robinson was asked to resign Saturday following a vote by the board of directors that led several staff and board members to resign in protest. Robinson took the reins as OutServe-SLDN’s executive director in October, making her the first transgender person to head a non-trans-specific national LGBT organization. Reports from The Bilerico Project and BuzzFeed indicated turmoil surrounding the board’s vote and anger directed at board co-chair Josh Seefried, including reports that nine OutServe-SLDN chapters had threatened to breakaway if Seefried does not step down as co-chair. It was not yet clear if those staff members who had resigned in protest would rejoin the organization temporaily.

The turmoil comes as the Pentagon is scheduled to host a Pride celebration Tuesday morning that is expected to be attended by Defense Secretary Chuck Hagel.

UPDATE @ 10PM: Sue Fulton, who was one of the board members to resign over the weekend, has taken issue with the board’s statement and implied that the board’s co-chairs, Josh Seefried and April Heinze, should step down.

Kudos to Allyson Robinson for taking the high road in this situation. But I can’t make sense of the Board’s statement. Are they trying to imply that they did NOT demand Allyson’s resignation?? To even suggest that would be an insult to my honor, and an offense to the honor and integrity of others who resigned, especially talented, dedicated, and principled staff members Zeke Stokes, Gary Espinas, and David McKean.

In a larger sense, this statement, appearing after days of silence, is an insult to the members. Several remaining Board members are people I respect; unfortunately their good sense did not win the day. This appears to be a craven, self-serving attempt by the Board leadership to keep their jobs. Given the catastrophic loss of donors who’ve fled, and members who are fleeing, I am astonished that there is no accountability from the Board leadership. In any self-respecting organization, the Co-Chairs would resign from the Board.