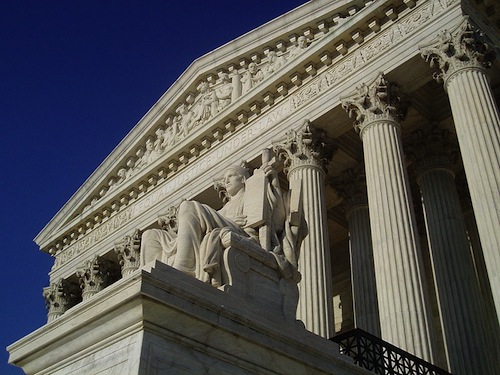 The wait is almost over.

Before the month’s end, the nation’s highest court will decide two landmark cases that have the potential to dramatically change the marriage-equality movement and the lives of millions gay Americans.

Since the Supreme Court concluded oral arguments nearly three months ago in U.S. v. Windsor, the case challenging Section 3 of the Defense of Marriage Act defining marriage as between a man and a woman, and Hollingsworth v. Perry, the case concerning California’s ban on same-sex marriage, advocates have waited for a ruling that could change their movement.

As argued by Theodore Olson, the conservative half of the star legal duo leading the charge against Proposition 8, during oral arguments before the court on March 26, not only is California’s same-sex marriage ban unconstitutional, but so is denying same-sex couples the right to marry anywhere in the country.

But while California clerks are preparing for the possibility that they will again be permitted to issue marriage licenses to same-sex couples for the first time since California voters approved Proposition 8 in November 2008, many doubt the high court will usher in marriage equality in all 50 states when it issues its ruling later this month.

Barring a sweeping ruling in the Proposition 8 case, those who have fought for marriage equality for decades say the work that remains after the Supreme Court rules may look much the same.

“The day after is very much likely to look like the day that came before,” Evan Wolfson, founder of Freedom to Marry, told Metro Weekly. “The same strategy that brought us to this point is the strategy that will bring us to our goal nationwide.”

This strategy includes growing the majority who support marriage equality, winning more states and ending federal marriage discrimination in the form of DOMA. But Wolfson insists the strategy has never been individual wins in all 50 states.

“Rather, the strategy is to get a critical mass of states and a critical mass of public support that creates climate for the Supreme Court or potentially Congress to bring the country to national resolution,” Wolfson said. “So it’s not that we’re sitting here saying, ‘Oh, my God, how are we going to win in each state over the next multiple decades?’ It’s rather, ‘How can we work as hard and as fast as possible to win as many states as we can to bring the country home?'”

According to Human Rights Campaign Vice President Fred Sainz, “If the Supreme Court returns marriage to California, 30 percent of the U.S. population – including our most populous state — will live in marriage equality states. When the next marriage cases reaches the high court, there’s no reasonable argument that could be made as to why the remaining 70 percent of the U.S. population could be denied marriage.” Sainz adds the momentum after such a ruling, even if it is limited to California, would be enormous.

Despite state legislatures in Rhode Island, Delaware and Minnesota voting to legalize same-sex marriage in May alone, the strong momentum has still given way to setbacks in recent weeks – setbacks that will likely continue.

After the Illinois Senate passed marriage-equality legislation on Valentine’s Day, the bill languished in the state’s House of Representatives until the last day of the session, May 31. Gov. Pat Quinn (D) called on the House to vote and even President Barack Obama, who previously served in the state Senate, returned to Chicago for a fundraiser to stump for the bill.

“I wrestled with this for a long time and I am absolutely convinced it is the right thing to do,” Obama said during that late May event.

But it wasn’t enough to bring the bill to a vote. Despite assurances they had enough votes for passage, a tearful Rep. Greg Harris (D), the lead sponsor of the bill who is also gay, took to the floor to announce no vote would come this session.

Chief Justice John Roberts, meanwhile, noted that “political figures are falling over themselves to endorse” marriage equality during oral arguments in the DOMA case. Advocates are now pointing to Illinois as an example of why the Supreme Court must resolve this issue once and for all.

Stating that the Illinois House “neglected the rights of its constituents” by failing to call a vote, HRC President Chad Griffin said in a statement that the body’s “inaction is a prime example of why the U.S. Supreme Court must rule in favor of full marriage equality nationwide to ensure the security and welfare of these and countless other American families aren’t left to chance in future political battles.”

Advocates insist the work is not yet done in Illinois and marriage equality could still be secured before the end of the year. However, the disappointment in the House was indicative of a fight that could become increasingly complicated in the absence of a sweeping ruling from the Supreme Court.

There are 30 states that have constitutional amendments defining marriage as between a man and a woman, and the process for repealing such amendments varies significantly from state to state. As noted in a recent report by the Human Rights Campaign, the three different avenues for enacting such a repeal generally include a voter initiative to put the issue on the ballot; legislation approved by state lawmakers; and a constitutional convention. Some states require a combination of those three avenues.

In Nevada, lawmakers have already begun the long and arduous process of repealing the state’s ban on marriage equality. Last month, the Nevada Assembly voted 27-14 to repeal the state’s 2002 same-sex marriage ban. But in order for the repeal to take effect, the next consecutive legislative session two years from now must also vote to repeal the amendment and then the issue must be presented before voters in 2016. It’s less complicated in states such as Oregon, where marriage-equality supporters hope to place a constitutional amendment on the 2014 ballot that would reverse the state’s ban on same-sex marriage. The initiative has the support of Gov. John Kitzhaber (D).

A focus also remains on states like New Jersey, where Gov. Chris Christie (R) vetoed marriage-equality legislation approved by lawmakers in early 2012 under the argument it should be an issue left to voters. (Wolfson notes the last time New Jersey put a civil rights issue on the ballot was in 1915, when male New Jersey voters shot down an initiative to grant women the right to vote.) The Legislature has until January 2014 to override Christie’s veto, and organizations like HRC and Freedom to Marry are working to see that it happens.

“The marriage movement has always found a way around the obstacles in front of us. … [A]round, over or above, we’ve always found a way to advance marriage equality,” Sainz said in an email to Metro Weekly. “Assuming the Court returns marriage to California, we’ll continue to do that. Illinois, New Jersey, and Hawaii will be up soon. And Oregon and Nevada will follow with electoral contests overturning their amendments. We won’t be stopped until there’s marriage equality in all 50 states.”

But while activists remain focused on states within reach of granting full equality to same-sex couples, without a sweeping ruling focus on the Supreme Court will not fade quietly.

“Unless the court hands us the full victory we are hoping for, our work will be to continue building a majority and preparing to get back to the court with that added momentum,” Wolfson said.

And when might they return to the Supreme Court?

[Editor’s Note: This article has been updated to include additional comment from Fred Sainz.]