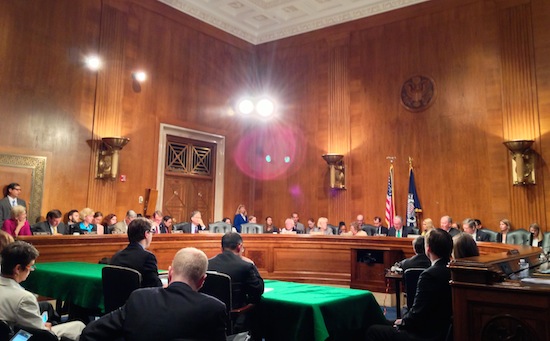 Legislation that would protect LGBT Americans from workplace discrimination took a giant step forward today as a committee voted to send the legislation to Senate floor with bipartisan support.

During a hearing that lasted just over 15 minutes, the Senate Health, Education, Labor & Pensions Committee voted 15-7 to report the Employment Non-Discrimination Act (ENDA) to the full Senate. The 12 Democrats on the committee were joined by three Republicans — Sens. Mark Kirk (Ill.), a co-sponsor of the bill, Lisa Murkowski (Alaska) and Orrin Hatch (Utah) — in voting to advance the bill, which would prohibit workplace discrimination on the basis of sexual orientation and gender identity.

“The harsh reality is that — in the second decade of the 21st century — employers in most states can still fire, refuse to hire, or otherwise discriminate against individuals because of their sexual orientation or gender identity — and shockingly, they can do so within in the law,” said committee Chairman Tom Harkin (D-Iowa) as the hearing began.

The committee considered no amendments before today’s vote, and the committee room erupted into applause after the vote as Harkin smiled approvingly. Today marked the first major movement on ENDA since 2002, when the same Senate committee, under the leadership of Sen. Ted Kennedy (D-Mass.), voted the legislation out of committee. 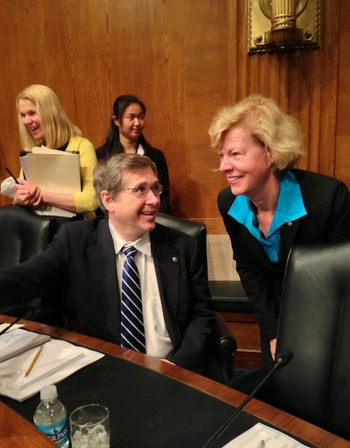 Although the bill was expected to pass out of committee, advocates have been pressuring Republican members of the committee for months in order to build bipartisan support. The Human Rights Campaign announced yesterday that it had delivered a combined number of constituent contacts (consisting of postcards, emails and phone calls) of 12,000 to Murkowski’s, Hatch’s and Richard Burr’s (R-N.C.) offices. Burr announced yesterday he would vote against the bill.

Speaking to reporters, Murkowski said the outpouring of support for ENDA from her constituents helped influence her vote.

“When I was home over the break, I think it was 1,174 postcards were delivered to my office from Alaskans from around the state in support of ENDA,” Murkowski said. “If you listen to your folks back home this is important to them.”

“No discrimination against anyone at any time — it’s pretty basic,” Murkowski added.

Asked what changed in the past decade to make today’s vote possible, Kirk — a longtime Republican champion of the bill — said, “People came out of the closet and we all know their names and we have now built a consensus that they should not be discriminated against.”

“I think 20 years from now we’ll look back at this debate and wonder why this was even an issue,” Kirk said, adding that the he would not underestimate the difficulties the bill will face if it makes to the Republican-controlled House of Representatives.

The only Senate Republicans to cast their votes in person were Kirk, Murkowski and Lamar Alexander (Tenn.), the ranking Republican on the committee.

Following today’s committee vote, advocates remain confident that ENDA will finally receive a vote before the full Senate for the first time in well over a decade. It was Sept. 10, 1996, that ENDA came one vote shy of passage in the U.S. Senate, just hours after the same body overwhelmingly approved the Defense of Marriage Act, forbidding federal recognition of same-sex marriages. Nearly 17 years later, as marriage equality has entered the mainstream and the Supreme Court has struck down Section 3 of DOMA, there has yet to be another vote on ENDA.

Harkin told reporters he is confident they will reach the 60 Senate votes needed for passage and that a vote will likely come in the fall.