Tuesday was a day of celebration for Prerna Lal. Not only was it her wedding day, but she also had the opportunity to make a meaningful statement about a pressing issue.

The undocumented, queer-identified, immigration-rights activist has dedicated 14 years – half of her life – to immigration advocacy since her family brought her to the United States from Fiji. During her family’s residency-application process, Lal passed the threshold of turning 18, removing her from her family’s application and sending her alone to the back of the immigration waiting line and a legal nightmare of deportation proceedings. 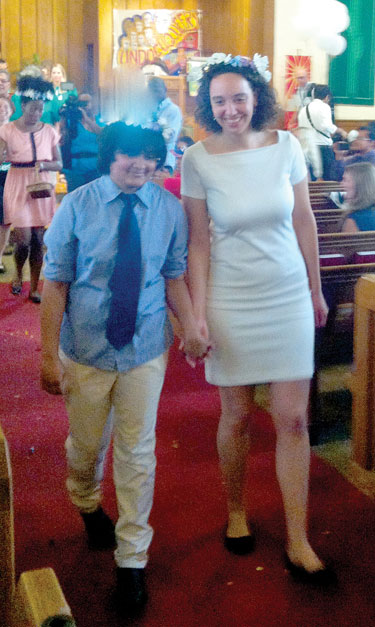 But Lal’s fate changed June 26 after the U.S. Supreme Court ruled Section 3 of the Defense of Marriage Act (DOMA) unconstitutional, paving the way for same-sex binational spouses to be recognized by the federal government and making the foreign-born spouse eligible for a green card.

With that barrier lifted, Lal’s partner, Lindsay Schubiner, suggested getting married so that Lal could finally obtain her green card and stay in the U.S. permanently.

Because Lal has long been an important leader in the fight to obtain legal status for undocumented youth – a “DREAMer,” so named for the proposed Development, Relief, and Education for Alien Minors (DREAM) Act – the couple felt it fitting to combine their wedding ceremony with the annual “DREAM Graduation,” a symbolic event where youth activists in the immigration-rights fight gather and receive diplomas for their work and advocacy on behalf of the cause.

“We’re trying to celebrate the intersection of our communities, that some of us are queer, that some of us can get relief from deportation by getting married, if we have bona fide marriages,” Lal said of her decision to hold a symbolic wedding ceremony alongside the DREAM graduation. “Graduation is one of those markers in life, just like marriage is, so we decided to combine those two events together and have a celebration of both.”

Dulce Guerrero, a young DREAMer from Georgia and one of the organizers of the July 11 event, said the graduation, which was sponsored by the National Immigrant Youth Alliance, DreamACTivist.org and the LGBT-focused Immigration Equality organization at the Lutheran Church of the Reformation on Capitol Hill, serves as a chance for young activists to talk about their accomplishments working on various initiatives, from stopping deportations to pushing for in-state tuition rates for undocumented students.

“The wedding came into play after the Supreme Court ruling on DOMA,” Guerrero told Metro Weekly. “It meant a lot to the immigrant families and partners who will now be able to sponsor their loved ones. So we also decided to celebrate the wedding of Prerna and Lindsay. Prerna’s very well known and loved by everyone, so we wanted to celebrate that.”

Surrounded by friends, fellow activists, and several youth who either donned caps and gowns or T-shirts reading “I Am Undocumented,” Lal and Schubiner exchanged vows following the DREAM Graduation. As the couple walked down the aisle to leave the church after the ceremony, organizers led the crownd in chants of “Undocumented! Unafraid!” or “Sin papeles! Sin miedo!” as they had throughout the preceding graduation ceremony.

Following the event, Lal explained that Tuesday’s ceremony was merely symbolic, but added that it would “probably be more exciting” than her official state-recognized marriage ceremony, in which she and Schubiner will be signing a marriage certificate. She said the symbolism was important to draw attention to the fact that, due to the recent Supreme Court decision, some members of the undocumented and queer communities, which overlap, can now cement their status as citizens.

Lal says she’s already seen some same-sex binational couples from other states making treks to the District or the 13 states with marriage equality to wed and remove the threat of deportation.

“The great thing about immigration is that place of marriage controls,” Lal told Metro Weekly. “All you need is a bona fide marriage. You can live in Utah, travel to California, get married, and you’re fine. It’s sad for people who are too old to travel, or too poor to travel, but if you can get to any of the states that let you marry, you can get your green card.”