White House praises ENDA advance, mum on what role it may take 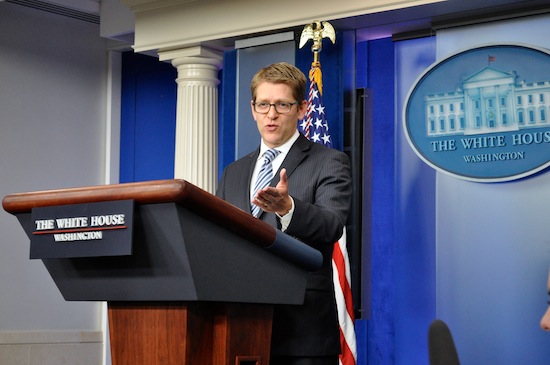 The White House applauded today’s bipartisan vote by a Senate committee to advance the Employment Non-Discrimination Act (ENDA) to the full Senate, while providing few details on what role the White House will play in building support necessary for the legislation to pass both houses of Congress.

“We welcome the passage by the committee of the Employment Non-Discrimination Act, the bipartisan support that it saw, the Republican senators who voted for it, Sen. Kirk who was a leader in the effort,” White House press secretary Jay Carney told reporters, echoing a statement released by the White House shortly after the committee vote.

During a Wednesday hearing that lasted just over 15 minutes, the Senate Health, Education, Labor & Pensions Committee voted 15-7 to report ENDA to the full Senate. The 12 Democrats on the committee were joined by three Republicans — Sens. Mark Kirk (Ill.), a co-sponsor of the bill, Lisa Murkowski (Alaska) and Orrin Hatch (Utah) — in voting to advance the bill, which would prohibit workplace discrimination on the basis of sexual orientation and gender identity.

“This reflects the strategy the president has long believed is the right one when it comes to these matters and we’ll continue to press for broader support in the Senate and in the House on this issue,” Carney added, alluding to the White House’s support for comprehensive federal legislation with bipartisan support rather than a long-called-for executive order that would prohibit federal contractors from LGBT workplace discrimination – a move that would protect 20 percent of the civilian workforce.

Supporters of ENDA, including its lead sponsor in the Senate, Jeff Merkley (D-Ore.), have argued President Obama could eliminate at least some discrimination immediately, and in the process build momentum for ENDA. Asked by Metro Weekly if the executive order would help or hinder efforts to pass ENDA, Carney demurred.

“Our position on the executive order hasn’t changed and our position on the executive order has been coupled with our belief that the best way to do this is to pursue legislation that’s broad and comprehensive and that’s what ENDA is,” Carney said. “Today’s a good day in this narrative. It’s a good day because the committee passed it and it passed it with Republican support. We’ll take that and we’ll move forward and hope that we can get more progress.”

Advocates who cheered today’s committee vote on ENDA — the first since 2002 — expressed frustration at the White House’s continued opposition to an executive order Obama promised to sign when a candidate for president in 2008.

“ENDA and an executive order are not either/or policies and both should be pursued,” Human Rights Campaign spokesman Michael Cole-Schwartz told Metro Weekly. “Even if ENDA were to become law, extending nondiscrimination protections to federal contractors is a necessary and worthwhile step.”

With the White House engaged aggressively on issues such as immigration reform, Freedom to Work President Tico Almeida called on the White House to lobby the few Democratic holdouts in order to secure the 60 votes necessary for ENDA’s passage in the Senate.

But Carney was offering few specifics today on the White House’s plan to build bipartisan support in the Senate and — perhaps more importantly — in the Republican-controlled House of Representatives. “If you talk about your strategy in advance, you’re not a very good strategist,” Carney said.