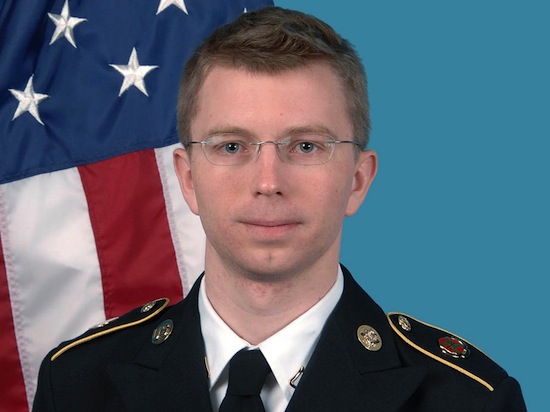 Bradley Manning was sentenced Wednesday by a military judge to 35 years in prison for providing more than 700,000 government files to Wikileaks in one of the largest leaks of classified documents in American history.

Manning’s sentence comes more than three years after the 25-year-old Army private was arrested in May 2010 while serving in Iraq. Late last month, Manning was found guilty on 19 of 21 charges against him, including six counts of espionage, but was found not guilty of the most serious charge against him — aiding the enemy.

The judge who presided over the Manning trial, Army Col. Denise Lind, also reduced Manning’s rank from private first class to the lowest in the military, ordered he forfeit all pay and be dishonorably discharged. Manning, who publicly apologized for his actions, faced up to 90 years in prison, while prosecutors were pushing for 60 years. He is expected to be eligible for parole in about eight years, according to The New York Times.

Manning, who identified as gay when he joined the military prior to the repeal of “Don’t Ask, Don’t Tell” and may be transgender, faced an uncertain future in military prison after he was escorted out of the courtroom at Fort Meade, Md., today. Manning’s struggle with his gender identity took center stage during the sentencing phase of his trial as his lawyers credited the possibility that he may be transgender as having contributed to his actions, much to the chagrin of many LGBT advocates who largely kept their distance from a case that divided the LGBT community.

“This is my problem,” Manning wrote in an April 24, 2010, email coming out to his supervisor that included a photo of him in a blond wig and lipstick.

“I’ve had signs of it for a very long time. Its (sic) caused problems within my family. I thought a career in the military would get rid of it. It’s not something I seek out for attention and I’ve been trying very, very hard to get rid of it by placing myself in situations where it would be impossible,” Manning continued. “But it’s not going away, its (sic) haunting me more and more as I get older. Now, the consequences of it are dire, at a time when its (sic) causing me great pain in itself.”

Capt. Michael Worsley, a psychologist who treated Manning around the same time, testified that Manning suffered from gender dysphoria as well as several personality disorders that may have contributed to his leaking of documents.

“Being in the military and having a gender identity issue does not go hand in hand,” Worsley said in his testimony. “You put him in this environment — this kind of hyper-masculine environment, if you will, and with the little support and few coping skills, the pressure would have been difficult to say the least. It would have been incredible.”

It remains unclear if Manning currently identifies as transgender. The Bradley Manning Support Network last addressed Manning’s gender identity in March 2012, saying in a statement, “Everything we know from friends, family, and his legal defense team, is that he wishes to be referred to as Brad or Bradley until he’s able to get to the next stage of his life.”

But as Courthouse News Service reports, Manning will face limited options if he does want to transition during his incarceration in military prison.

According to a spokeswoman for Fort Leavenworth, Kan., where Manning is expected to serve his sentence, “All inmates are considered soldiers and are treated as such with access to mental health professionals, including a psychiatrist, psychologist, social workers and behavioral science noncommissioned officers with experience in addressing the needs of military personnel in pre- and post-trial confinement. The Army does not provide hormone therapy or sex-reassignment surgery for gender identity disorder.”

Manning’s attorney, David Coombs, addressed those reports during a press conference after Manning’s sentencing, stating that he is currently looking into the matter of “ensuring that a soldier who is in confinement who has gender dysphoria gets treatment.”

And if Manning is not provided transgender health care while in military prison? “I’m going to change that,” Coombs said.

Although a medical regulatory ban remains in place for transgender servicemembers, the Department of Veterans Affairs does provide health care for some transgender medical needs, such as hormone treatments, but the VA does not provide sex-reassignment surgery. If Manning were to transition after his release, it appears he would not be eligible for VA benefits because he was discharged dishonorably.

“Without addressing the specifics of one case or another, it would nevertheless be a sad day if the military denied necessary medical treatment to a prisoner,” said Aaron Belkin, executive director of the Palm Center, which recently launched an unprecedented study of transgender military service after receiving a $1.35 million grant, in a statement to Metro Weekly.

According to Mara Keisling, executive director of the National Center for Transgender Equality, to deny Manning transgender medical treatment while incarcerated would be considered cruel and unusual punishment as stipulated by numerous federal courts. “Certainly in a civilian jailing context it would be illegal and a violation of the Constitution,” Keisling said.

[Editor’s Note: This post has been updated to include comments from Jennifer Levi.]