Chelsea E. Manning is the new, female name of Bradley Manning, the Army private who has been convicted of sharing classified documents with WikiLeaks. Manning’s lawyer, David Coombs, appeared on the Today show to explain how he plans to secure hormone therapy for Manning while she is incarcerated. 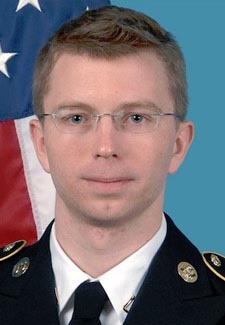 According to a written statement, Manning, in part, had this to say:

“As I transition into this next phase of my life, I want everyone to know the real me. I am Chelsea Manning. I am a female. Given the way that I feel, and have felt since childhood, I want to begin hormone therapy as soon as possible. I hope that you will support me in this transition. I also request that, starting today, you refer to me by my new name and use the feminine pronoun (except in official mail to the confinement facility). I look forward to receiving letters from supporters and having the opportunity to write back.”

Manning has been mostly identified as a gay male in the media despite early evidence that she struggled with her gender identity. In a series of chat transcripts from 2010, as first published by Wired magazine, Manning wrote (as ID “bradass87”):

“(10:20:53 AM) bradass87: yes… questioned my gender for several years… sexual orientation was easy to figure out… but i started to come to terms with it during the first few months of my deployment …

“(11:49:51 AM) bradass87: and i already got myself into minor trouble, revealing my uncertainty over my gender identity… which is causing me to lose this job… and putting me in an awkward limbo

“(11:50:54 AM) bradass87: i wish it were as simple as “hey, go transition”… but i need to get paperwork sorted… financial stuff sorted… legal stuff… and im still deployed, so i have to redeploy back to the US and be outprocessed”