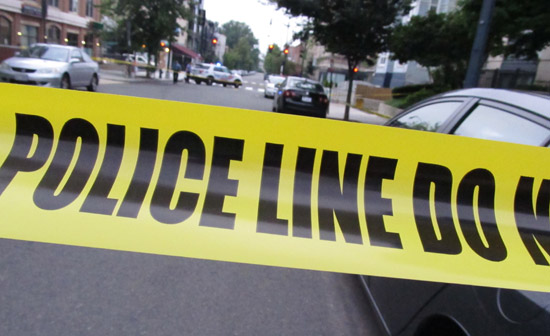 A Northwest D.C. man was arrested by police last week and faces a charge of felony murder for the killing of a gay man in Columbia Heights on July 26.

The suspect in the case, Jermaine Brown, appeared in D.C. Superior Court Aug. 2, with Judge Karen Howze finding probable cause that Brown murdered the victim by shooting him and setting him on fire. He has since been scheduled for a preliminary status hearing on Aug. 22. Brown’s lawyer, David Maxted, has filed for notice of discovery, meaning he has asked for information or evidence that could be used by the state to prove his client guilty.

According to charging documents, which were posted online by the local crime website Homicide Watch D.C., the D.C. Fire Department & Emergency Medical Services responded at 6:18 a.m. to a call for an ”odor of smoke” in the 1000 block of Euclid Street NW, where they found the victim severely burned and suffering from multiple gunshot wounds. The victim was transported to Washington MedStar Hospital, where he was pronounced dead.

According to findings from the District of Columbia Medical Examiner’s Office, the victim’s death was ruled a homicide, caused by three gunshot wounds and burns from being set on fire while alive.

During the follow-up investigation, police searched for the defendant’s car, which was not at the scene of the crime. It was later photographed by a camera in the city’s Trinidad neighborhood, near the intersection of Mount Olivet Road NE and West Virginia Avenue NE. The car has not yet been recovered.

A witness approached police with a plastic bag containing a tablet, two cellular phones, and an iPod touch, the serial numbers of which were later found to match the serial numbers on empty iPod, iPhone and iPad boxes found in the victim’s apartment. The witness then told police that the tablet, phones and iPod had been obtained from an apartment in the 400 block of Evarts Street NE.

Another witness residing at that address later informed police that Brown had come to the apartment and dropped off the bag containing the tablet, phones and iPod at 8 a.m. on July 26. A couple of hours later, Brown returned for a few minutes and then left, without asking for the bag, according to the second witness. The second witness then received a call saying the victim’s family wanted the bag, and gave the bag to the first witness, who transported and handed it over to police.

Brown later returned to the Evarts Street apartment, where police detained and questioned him. After agreeing to come to the police station, Brown initially told police he had been robbed in his Northwest D.C. apartment on July 25, saying he didn’t know the identity of the person who had robbed him, but that he had first seen the person at 11th and Euclid Streets NW.

According to charging documents, during the course of the interview, Brown told police that he had visited the victim, whom he referred to as ”Man,” and alleged that Man, who he said was gay, had tried to ”holla” at him, meaning initiate some sort of sexual relationship. Brown claimed he and the victim had at times engaged in drug use but denied either killing him or having any the technological devices in his possession.

The report summarizes Brown’s statements to police, saying, ”He advised that Man was gay and he denied ever ‘going that way’ because something is wrong with it and he sees a problem with it. He described it as being nasty.”

Other witnesses interviewed by police placed Brown near the crime scene on the night of the murder, and disputed some of Brown’s claims, including whether the victim had used drugs at all, and whether Brown had a backpack or other bag with him when he arrived at Euclid Street. Police later confronted Brown about inconsistencies in his various statements, which frequently changed throughout the course of his interviews with police.

The charging documents state: ”D1’s (Brown’s) final version of events is that he found the black bag in the hallway of [redacted] Euclid Street at 3 a.m. on Friday, July 26. D1 placed it in his book bag and rode his bicycle to his mother’s house. Around 5 a.m., he stole the decedent’s Mercedes, which was parked in front of the building. Finally, D1 added that he occasionally engaged in sex with men, but that he has never had a sexual relationship with the decedent.”

Police later arrested Brown and charged him with one count of felony murder. There are currently no bias-related enhancements in the charge.