Already famous for his work in cancer detection, 16-year-old Jack Andraka is tackling a new project

You can’t blame Jack Andraka for not yet knowing what career he wants later in life.

“It costs 3 cents and takes five minutes to run,” the Crownsville, Md., native says as he recites his pitch for his cancer-detection tool. “It’s 168-times faster, over 26,000-times less expensive, and over 400-times more sensitive than our current methods of diagnosis. But it can also detect cancer in the earliest stage, when someone has close to a 100 percent chance of survival. It has extremely high accuracy, being over 90 percent accurate.” 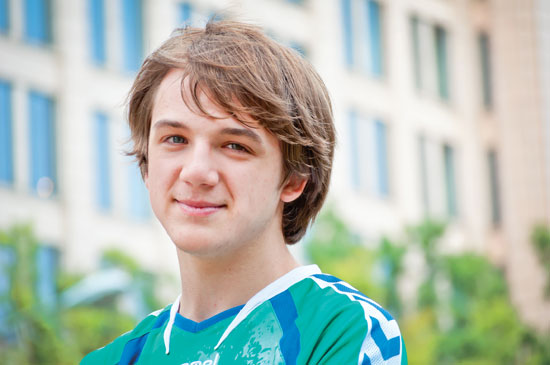 Andraka says the thing that first sparked his interest in the cancer-detection tool was the death of a close family friend — whom he calls his uncle — from pancreatic cancer. Then 13, Andraka wanted to work on developing a tool that could detect cancer and began working on his project aided by only research from Google and free online scientific journals.

He later floated his proposal for the cancer-detection tool to 200 different scientists, asking if he could use space in their labs for development. Of the 200, only Dr. Anirban Maitra, an expert in the pathology of pancreatic cancer and genetic medicine at the Johns Hopkins School of Medicine, agreed to let Andraka use his lab. Andraka then developed the tool over a nearly two-year period, leading to his $100,000 grand-prize win at the 2012 Intel International Science and Engineering Fair.

“I didn’t know if this was going to work when I started,” he says of the time and effort he put into the project. “I spent my birthday in the lab. But I didn’t mind it. I liked going into the lab.”

Andraka’s detection tool, for which he holds the international patent, is very similar to diabetic test strips to monitor glucose levels in the blood, but instead are used to detect cancer antibodies. By swapping out the type of antibody, the tool can detect other diseases besides pancreatic cancer. The cost of the materials involved is very low, which means that when his detection tool is released to the public, it should be affordable. Andraka says he is currently in talks with medical companies to develop an over-the-counter test.

Andraka’s latest undertaking has him working with a group of other teenagers who have established reputations as up-and-coming scientists to compete for the $10 million Qualcomm Tricorder X Prize. The competition, which runs for three-and-a-half years, until June 2015, asks teams to develop a smartphone-sized, consumer-friendly device that can be used to diagnose 15 different conditions and capture metrics that can give an indication of a person’s health via sensors, imaging technologies and other non-invasive procedures.

Outside the lab, the junior at Glen Burnie, Md.’s North County High School is spending a great deal of time away from his school due to a busy schedule that has him traveling the country — and the globe — to speak with different groups or at conferences. When he speaks, he stresses the importance of providing some form of “open access” to scientific articles and journals that may be blocked by expensive pay walls, something that hindered his own research for the cancer-detection tool, even though that undertaking was ultimately successful. He is scheduled to testify on that issue before Congress later this year.

Although Andraka has been out as gay since he was 13, he just shrugs when asked about his sexual orientation, referring to his coming-out process as “relatively painless” and noting that his family and friends are aware of his orientation and have been very supportive.

Asked what he’d like people to know about him besides his scientific accomplishments, he responds: “I suppose I’d want them to know I’m not a complete nerd. I actually get out and stuff. I go kayaking. I’m not the creepy guy that wears big glasses and hides out in the corner.”

Update: Jack was featured on the CBS show ’60 Minutes’ on Sunday, October 13:

John Riley is the local news reporter for Metro Weekly. He can be reached at jriley@metroweekly.com
← Previous Story Talking LGBT Tech
Next Story → Next Generation's Next Step