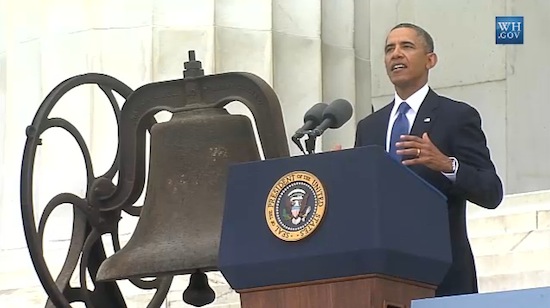 President Barack Obama marked the 50th anniversary of the March on Washington for Jobs and Freedom in a speech that called for unity and directly acknowledged the LGBT community.

Speaking from the exact spot on the Lincoln Memorial that Martin Luther King Jr. delivered his “I Have a Dream” speech 50 years earlier, the nation’s first African-American president said the determination of those who came to Washington in 1963 is what pushed the country forward. “[B]ecause they kept marching, America changed,” Obama said.

In a ceremony that included members of the LGBT community, including GLSEN Executive Director Eliza Byard, who spoke earlier in the day, Obama continued, “Because they marched, America became more free and more fair — not just for African Americans, but for women and Latinos, Asians and Native Americans; for Catholics, Jews, and Muslims; for gays, for Americans with a disability. America changed for you and for me.”

Obama spoke at length about the economic and racial disparities that still exist five decades later, while acknowledging the progress that has been made. Speaking to the enduring lessons of the March on Washington, Obama said the “promise of this nation will only be kept when we work together.”

“And I believe that spirit is there, that truth force inside each of us,” the president said. “I see it when a white mother recognizes her own daughter in the face of a poor black child. I see it when the black youth thinks of his own grandfather in the dignified steps of an elderly white man. It’s there when the native-born recognizing that striving spirit of the new immigrant; when the interracial couple connects the pain of a gay couple who are discriminated against and understands it as their own.”

Earlier this month, the White House announced Obama would posthumously award later this year the nation’s highest civilian honor, the Presidential Medal of Freedom, to Bayard Rustin, the out gay man who organized the March on Washington.

[Image: Barack Obama marks the 50th anniversary of the March on Washington. Screenshot via WhiteHouse.gov.]