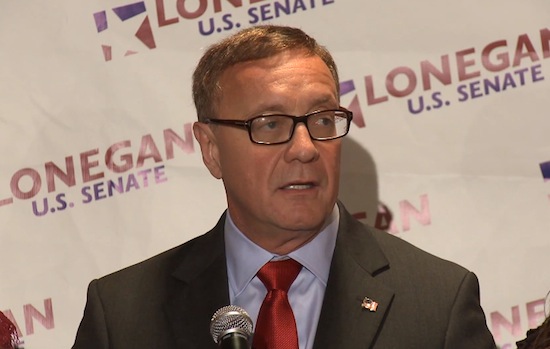 The New Jersey Republican running against Newark Mayor Cory Booker for the U.S. Senate said Tuesday that it’s “weird” Booker won’t deny rumors that he may be gay.

“Maybe that helps to get him the gay vote by acting ambiguous,” Steve Lonegan said in an interview with the conservative website Newsmax.

“It’s kind of weird. As a guy, I personally like being a guy. I don’t know if you saw the stories last year. They’ve been out for quite a bit about how he likes to go out at three o’clock in the morning for a manicure and a pedicure,” Lonegan continued.

“I don’t like going out in the middle of the night, or any time of the day, for a manicure and pedicure. It was described as his peculiar fetish,” he said. “I have a more peculiar fetish. I like a good Scotch and a cigar. That’s my fetish but we’ll just compare the two.”

Lonegan’s remarks come in response to a Washington Post interview with the single Booker published Monday in which he said he was comfortable with speculation that he is gay.

“And people who think I’m gay, some part of me thinks it’s wonderful. Because I want to challenge people on their homophobia,” Booker said. “I love seeing on Twitter when someone says I’m gay, and I say, ‘So what does it matter if I am? So be it. I hope you are not voting for me because you are making the presumption that I’m straight.'”

Booker and Lonegan are running for the Senate seat left vacant after the death of Frank Lautenberg (D) in June. Booker and Lonegan are largely polar opposites on LGBT issues. Lonegan opposes marriage equality, but has not yet indicated if he would support the Employment Non-Discrimination Act.

During a recent appearance on MSNBC’s Up w/ Steve Kornacki, Lonegan said he supports the general idea behind ENDA.

“I support the right of every American to have a job to be protected in their employment, gay or straight,” Lonegan said. “So, there are other aspects of the bill that may have to be looked at. A lot of times in these bills, they put other things in that we don’t understand. But in terms of simply protecting the rights of gay people to keep their jobs — yes, I would [support ENDA.]”

The Senate is expected to hold a vote on ENDA after New Jersey’s special election on Oct. 16.

Update: Booker responded to Lonegan’s comments during an appearance on HuffPost Live, stating, “It’s just disheartening to hear somebody, in this day and age, in the United States of America, say basically … that gay men are not men, they’re not guys. It’s shocking to one’s conscience in this country, where we believe that the content of one’s character, the courage in one’s heart, the strength of one’s sense of purpose, the love that one has for others and their service, is what defines them. And instead he’s challenging the masculinity of millions of Americans.”