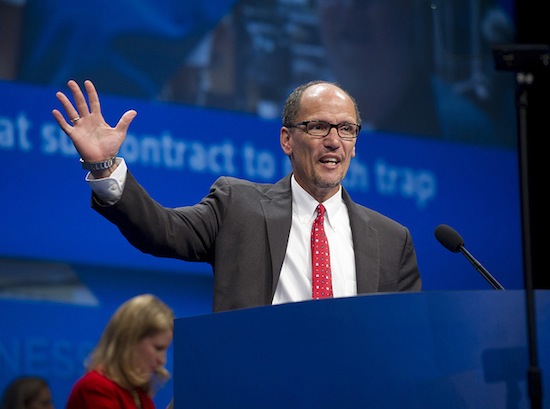 Legally married same-sex couples will be recognized by the federal government when it comes to private employee-benefit plans no matter where they live, the Labor Department announced Wednesday.

In the latest move by the Obama administration in the wake of the Supreme Court’s June 26 decision striking down Section 3 of the Defense of Marriage Act defining marriage as between a man and a woman, the Labor Department’s Employee Benefits Security Administration (EBSA) has declared that the terms “spouse” and “marriage” in Title I of the Employee Retirement Income Security Act of 1974 should apply to same-sex couples.

The decision seeks to to provide guidance to employee benefit plans, plan sponsors, plan fiduciaries and plan participants and beneficiaries under the EBSA’s jurisdiction.

“This decision represents a historic step toward equality for all American families, and I have directed the department’s agency heads to ensure that they are implementing the decision in a way that provides maximum protection for workers and their families,” said Secretary of Labor Tom Perez in a statement. “The department plans to issue additional guidance in the coming months as we continue to consult with the Department of Justice and other federal agencies to implement the decision.”

EBSA oversees the retirement, health and other workplace-related benefits of the nation’s workers, retirees and their families. According to the Labor Department, the agency oversees approximately 701,000 private sector retirement plans, 2.3 million health plans and other plans that provide benefits to more than 141 million Americans, which collectively hold more than $7.3 trillion in assets.

“By providing greater clarity on how the Supreme Court’s decision affects one of the laws we enforce, we are contributing to greater equality and greater protection for America’s working families,” said Assistant Secretary for Employee Benefits Security Phyllis Borzi in a statement.

The decision is the latest move by the Obama administration to apply the DOMA decision to legally married same-sex couples who live in jurisdictions that do not recognize their marriages. Last month, the Treasury Department and Internal Revenue Service determined legally married same-sex couples will be considered married for federal tax purposes regardless of where they currently live.