Cher Plans to ‘Kill’ It at Verizon Center Next Year 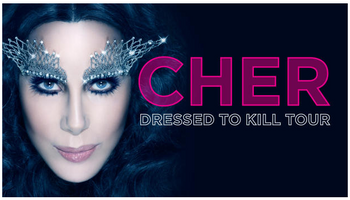 The incomparable Cher has announced her “I’m Not Dead Yet Tour” — oops, I mean the “Dressed to Kill Tour.” Which comes after her “Farewell Tour” and its offshoot, the “Never Can Say Goodbye Tour.” Obviously, she meant the latter: The 67-year-old is hooked on performing. This summer she put on a dazzling show at New York Pride’s Dance on the Pier, particularly noteworthy for the way she employed the gay masses as her backup choir, singing her lyrics for her, as she held the microphone outward, as if they were at church. Which to many, they were.

Next year, Cher will keep-on-never-goodbye-ing with a stop at the Verizon Center, which will be only the eighth stop in the first two weeks of a tour that will have her hitting a total of 49 cities in nearly four months — and that’s just the initial North American leg. Pshew.

Of course, Cherilyn Sarkisian is touring in support of her first album in 12 years, Closer to the Truth, which has just become her highest-charting album ever. It’s also a lot better than you’d expect — especially after that unfortunate first single “Woman’s World,” produced by Paul Oakenfold in a rave-warped style that suggests he can in fact turn back time. Would you believe there’s nary a dud in the Closer to the Truth bunch? Other than the already stated obvious, of course. And truth be told the second single “I Hope You Find It,” originally performed by Miley Cyrus, is a pretty bland ballad. But don’t let those tunes deter you: There are actually many highlights here, from the very of-the-moment EDM jam “Take It Like A Man,” featuring background vocals by Jake “Scissor Sisters” Shears, to the ballad “Lie To Me,” one of two strong songs co-written by Alecia Moore, better known as Pink. Pink actually sings background vocals on her other contribution here, the standout country-flavored progressive house anthem “I Walk Alone.”

All told the set displays a broader range than Cher’s magnum opus, 1998’s phenomenal dance album Believe. “Surrender to me now!” Cher shouts in parting on the Pet Shop Boys-styled “Lovers Forever.” And well, surrender you must.