Every Wednesday evening in recent weeks, about 10 people meet at the Human Rights Campaign (HRC) headquarters in downtown D.C. and get straight to work. Election Day, Nov. 5, is looming.

Armed with a list of names and a suggested script to follow, the volunteers seek out potential supporters and ask them if they are willing to work on behalf of pro-equality candidates Terry McAuliffe, Ralph Northam and Mark Herring – all Democrats – who are running for governor, lieutenant governor and attorney general, respectively, in Virginia. 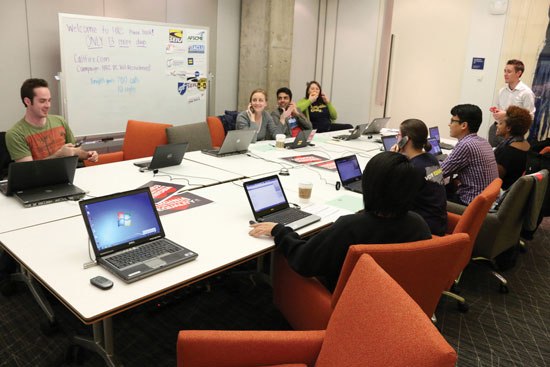 Each volunteer sits at a computer and waits as a software program linked to HRC-provided phones dials the numbers of people who at some point provided contact information when signing HRC-sponsored petitions advocating for LGBT rights.

”Success!” exclaims Angela Peoples, tapping a bell to let everyone know she’s just gotten someone to commit to volunteering. Peoples is the vice president for political and legislative affairs for the Gertrude Stein Democratic Club, D.C.’s largest LGBT political club, which has been encouraging members to join the effort.

Despite Peoples’s success, most calls made during these Wednesday evenings – phoning residents of D.C., Maryland and Virginia – will go unanswered. Those phone numbers will be recycled for use at future phone-banking events. The goal every Wednesday night is to log 700 calls. With 10 callers on duty, that’s 70 calls apiece during the two-and-a-half-hour window allotted for the volunteers to use the room.

Despite the need to meet those numbers, the mood in the room is lighthearted, with some volunteers cracking jokes, critiquing the background music that plays on their phones, or talking quietly with their neighbors as they wait for someone to answer. Some munch on pizza, apples and other snacks as they wait.

Eventually, of course, someone picks up. Reflexively, volunteers launch into the script, seeking to charm, cajole and convince that likely ally on the other end to call or canvass – meaning knock on doors and engage in face-to-face conversations – potential voters. 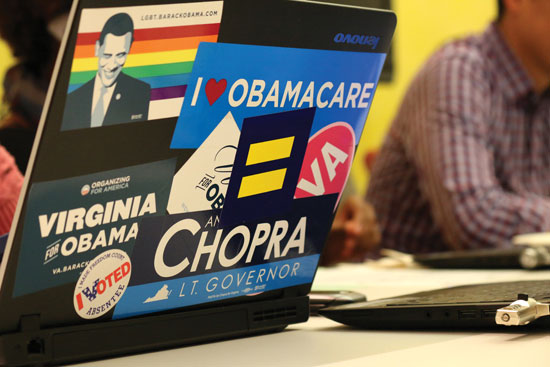 HRC’s biggest push on behalf of the Virginia Democrats is set for the afternoon of Sunday, Nov. 3, two days before Election Day, when the LGBT-rights organization will coordinate a canvassing effort into select regions of Virginia. Working in tandem with the Virginia Democratic Party’s coordinated campaign, the volunteers will target registered voters who vote infrequently and may miss off-year elections.

While HRC is technically a nonpartisan organization, dedicated to promoting LGBT rights across the nation, it does occasionally make endorsements for select candidates. In this year’s Virginia races, looking at the records of Republican nominees Ken Cuccinelli for governor, E.W. Jackson for lieutenant governor, and Mark Obenshain for attorney general – candidates whom LGBT activists have characterized as ”radical,” ”mean-spirited,” ”openly hostile to LGBT families” and ”rabidly anti-gay” – HRC chose to endorse all three members of the Democratic slate.

”This race really does hinge on whether we move forward or backwards in Virginia,” says Michael Cole-Schwartz, HRC’s director of communications. ”It’s important for people to get involved. Everyone has a vested interest in seeing that pro-equality candidates are victorious.”

Alex Bradley, a Wednesday night volunteer from Washington who also works as a temporary organizer for the McAuliffe gubernatorial campaign through HRC, said he’s gained some political insight through his campaign fieldwork, and uses that knowledge to add to what’s already detailed in the generic script given to volunteers. 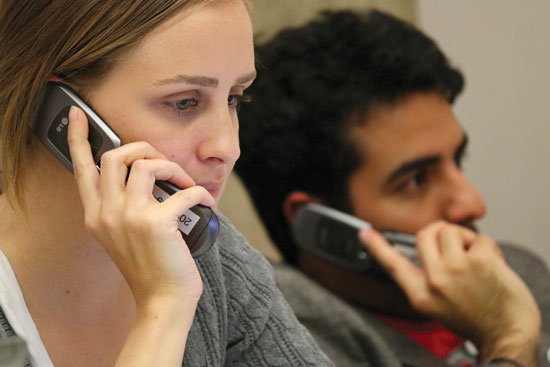 ”I always try to add to the script,” he says. ”We need to convince people to be willing to help out in Virginia. Otherwise, there’s a cascade effect, where once you have one homophobe in office, it’s more likely that others will be elected as well.”

Kate Kramer, of Arlington, says she became involved with HRC during last year’s presidential election, making calls and canvassing for President Obama and other pro-equality candidates. She has also canvassed separately for Virginia Democrats through other organizations, noting that many Virginia residents seem to express either apathy or anger about the upcoming elections. Even so, she says, this election is a crucial one for LGBT rights in the commonwealth, which means volunteers will just have to try harder to motivate Virginians to go to the polls.

”If I weren’t making these dials or door knocks, they wouldn’t be getting done,” she says. ”If we win, that would be great, and I’ll take full credit. And if it goes the other way, at least I’ll know I did everything I could.”