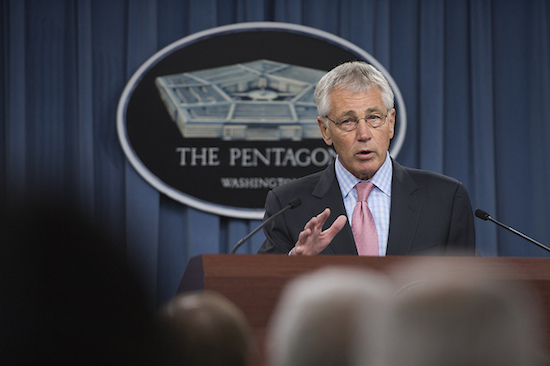 In a speech at the Anti-Defamation League’s centennial dinner in New York, Hagel said he ordered the chief of the National Guard Bureau today to meet with commanders in the states that continue to deny the processing of benefits at state installations for same-sex military families and see that federal policy is followed.

“Today, I directed the Chief of the National Guard Bureau, General Frank Grass, to take immediate action to remedy this situation,” Hagel said, according to prepared remarks provided by a senior Defense Department official. “At my direction, he will meet with the Adjutants General from the states where these ID cards are being denied. The Adjutants General will be expected to comply with both lawful direction and DoD policy, in line with the practices of 45 other states and jurisdictions.”

“We did it because everyone who serves our country in uniform should receive the full benefits they earned, fairly and in accordance with the law. Everyone’s rights must be protected,” Hagel said Thursday. “This means that all spouses of service members are entitled to DoD ID cards, and the benefits that come with them.”

However, before that decision was even implemented, Texas refused to comply with Hagel’s order, and other socially conservative states soon followed.

According to a senior Defense Department official, there are 114 Army and Air National Guard sites that are not providing ID cards to eligible same-sex spouses. Members of the National Guard with a same-sex spouse have instead been directed to travel to federal installations to enroll in the military’s federal benefit program.

“Not only does this violate the states’ obligations under federal law, their actions have created hardship and inequality by forcing couples to travel long distances to federal military bases to obtain the ID cards they’re entitled to,” Hagel said Thursday. “This is wrong. It causes division among the ranks, and it furthers prejudice, which DoD has fought to extinguish.”

Hagel’s announcement comes after advocates, as well as members of Congress, have pressured the Obama administration to act, noting that state bans do not impact federal benefits and a state law does not prevent the National Guard from completing what is essentially a mission from the secretary of defense.

“Secretary Hagel’s strong statement is a welcome development that makes clear that this resistance to the equal treatment of all married military couples is not only grossly unfair, but also a violation of federal law,” said Ian Thompson, legislative representative for the American Civil Liberties Union, which had been petitioning for action.

It remains to be seen what other measures could be taken by Hagel or the Obama administration to address those states that refuse to adapt to the post-DOMA landscape, but according to a senior Defense official, Hagel is prepared to take further action should those nine states not come into compliance with Defense Department policy.

“Whether they are responding to natural disasters here at home, in their states, or fighting in Afghanistan, our National Guardsmen all wear the uniform of the United States of America. They are serving this country,” Hagel said. “They – and their families – are entitled to all the benefits and respect accorded to all of our military men and women.”