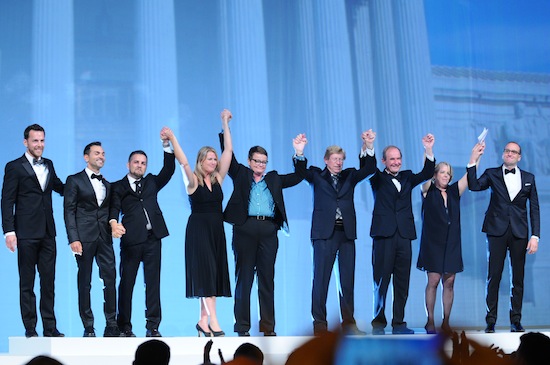 The nation’s largest LGBT-rights organization was in celebration mode Saturday night, marking a year of historic victories from the ballot box to the Supreme Court of the United States.

More than 3,400 attended the Human Rights Campaign’s National Dinner at D.C.’s Walter E. Washington Convention Center for the organization’s 17th annual black-tie gala, with all that had been achieved in the past year on full display.

“Here at this largest-ever HRC National Dinner, we have so much to celebrate,” HRC President Chad Griffin told the crowd. “Just since we were here last year: Sen. Tammy Baldwin elected, President Obama re-elected. More Democrats standing with us, and more Republicans standing up to join us. The destruction of DOMA and its two decades of discrimination and marriage equality in Maine, Maryland, Washington, Rhode Island, Delaware, Minnesota and, yes, California too.”

But while Griffin acknowledged the many steps forward that had been taken in such a short period of time, he reiterated that a “dark wall of discrimination” has created two Americas and the fight for equality is not over until “every single American in all 50 of our states can share in those same victories.” Griffin said a focus must be maintained on not just those states at the brink of legalizing same-sex marriage, such as Illinois and Hawaii, but those states where LGBT people are still denied the most basic protections.

Vice President Joe Biden was scheduled to attend the dinner, but canceled amid the ongoing government shutdown. In his stead, President Barack Obama delivered a video address.

“As you held this gala last year, the Defense of Marriage Act was still the law of the land,” Obama said on the big screens. “Loving, committed gay and lesbian couples were treated differently than loving straight couples. You knew it was wrong, I knew it was wrong, and in June the Supreme Court finally decided it was wrong.”

“We’re not there yet,” Obama added. “As I said in my inaugural address, our journey is not complete until our gay brothers and sisters are treated like anyone else under the law. For if we are truly created equal, then surely the love we commit to one another must be equal as well. That’s why I’ll keep pushing Congress to pass measures like the Employment Non-Discrimination Act, to give workers everywhere, including transgender Americans, the protection they deserve. And that’s why I’ll keep urging Republicans in Congress to reopen the government, restore the services people depend on and allow our dedicated public servants — gay and straight — to return to work.”

Although strides taken on the marriage-equality front took the forefront of the evening, HRC’s commitment to transgender equality did not go unacknowledged. Griffin reiterated the organization’s commitment to passing the Employment Non-Discrimination Act, and Sarah McBride, a transgender woman who came out in May 2012 during her last day as student body president at American University, spoke about her coming out experience along with her brother, who is gay.

While the event had its fair share of celebrity guests, with Gloria Steinem in attendance and Jennifer Lopez honored with HRC’s 2013 Ally for Equality award, the true stars of the evening were the plaintiffs and attorneys who brought about two landmark Supreme Court cases.

Coming less than four months after the Supreme Court struck down Section 3 of the federal Defense of Marriage Act and threw out the Proposition 8 case, thus returning marriage equality to California, the attorneys spoke to how the country had arrived to where it is today.

Taking the stage to a backdrop of the Supreme Court building, the attorneys in the Proposition 8 case, Ted Olson and David Boies, along with the plaintiffs — Kris Perry and Sandy Stier and Paul Katami and Jeff Zarrillo — along with Robbie Kaplan, who represented Edie Windsor in the DOMA case, received a standing ovation from the audience.

“Our victory against DOMA never would’ve happened without a 5-foot tall, 84-year-old, less than 100-pound lady by the name of Edie Windsor,” Kaplan said. “Because of her courage no gay person will ever have to suffer from the indignity of DOMA ever again.”

Describing the Proposition 8 case as the greatest privilege of his professional career, Boies said he and Olson had the torch passed to them after decades of suffering and sacrifice by those who came before them.

According to Olson, the two attorneys — who faced each other on opposing sides in the Bush v. Gore case — knew they would win when the two couples at the center of the case against California’s same-sex marriage ban told their personal stories as they testified during the trial.