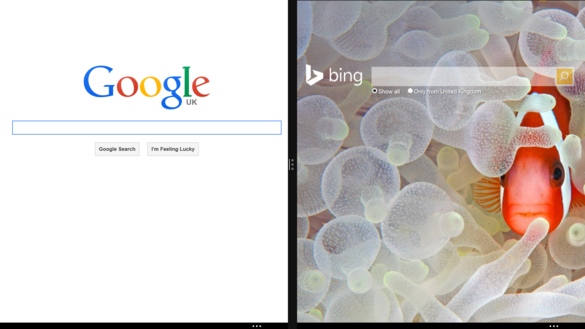 The UK Government is today praising a move by search giants Google and Bing — which combined account for 95 percent of internet search traffic — to introduce new algorithms into their complex software that will filter results for over 100,000 possible search terms relating to sexual abuse of children.

Prime Minister David Cameron called on Google, Microsoft, Yahoo and others, while speaking with the BBC in July, to do more to stop the search engines producing results for “depraved and disgusting” search terms. He threatened at the time “If we don’t get what we need we’ll have to look at legislation,” should the companies fail to act.

Google and Microsoft attended an internet safety summit at Downing Street — the PM’s official residence — this morning, where the National Crime Agency shared data which suggested that the removal of search results from both websites is already having an impact. Speaking afterwards, Google’s communications director said of the changes that they make it “much, much more difficult to find this content online.” Microsoft echoed this statement, in a rare display of unity with rival Google, stating “Day-to-day we’re fierce competitors, and we collaborate on this issue because it transcends that. It will be much harder to find that content on both Bing and Google.”

The changes take effect immediately in the United Kingdom, but will also have an impact globally — the revised search terms and results expanding to cover all languages which access Google in the next six months. What effect do they have on search results? Type “child pornography” (not that you ever normally would) into Bing and the search results are news stories, charities and Wikipedia pages. A pop-up box appears saying “Warning! Child abuse material is illegal” with a link to advice materials and support. Image searches say that no search results can be found — thankfully.

As for Google? The same search query — which wasn’t auto-completed by Google, which is good — returned the usual litany of news stories and Wikipedia links, though no warnings appeared. Image searches were more troubling — not only does it return results, there were several images that could be considered more than objectionable (though I should add that I have safe-search turned off by default). It may be that the changes have yet to take place on Google’s site for all users in the UK, as the BBC and other websites have had search results provide links to statements from Google about protecting children from abuse and to the Internet Watch Foundation, which can be used to report criminal online content. Both tests were carried out in Chrome.