The HP Chromebook is charming, inexpensive and well-made, but it certainly isn't for everyone

The Chromebook is an intriguing concept. It is, in some way, Google’s attempt to reinvent the netbook for the modern masses. Offering a cheap, light laptop form factor and a limited set of capabilities, it echoes the underpowered and underwhelming, but utterly portable, netbooks that flooded the market in the late ’00s. This time around Google isn’t forcing a full-fat desktop OS onto a processor that can’t handle it. Here, Chromebooks run Chrome OS, a custom-built system based on Linux, which essentially turns every core function of a laptop into a Web app. 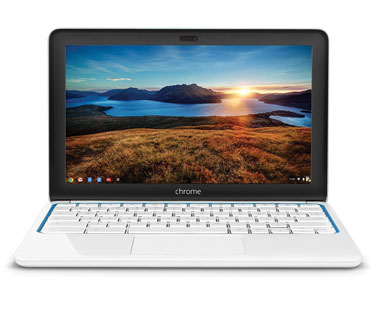 Google’s Chrome browser is the key here, and its litany of Web-enabled services allowing it to partially emulate the requirements of a standard Windows or OSX-running laptop. Document editing, PowerPoints and spreadsheets? Present in Google Docs. Cloud storage in Google Drive replaces a large, expensive hard drive. Need to watch videos and look at images? Chrome OS allows for this outside of its browser, one of the few functions performed that don’t require opening said browser. Really, every basic need that a user could have for a laptop is here — write a Word document and save it to Google Drive. Surf YouTube in HD, enjoy your social networks, download apps and games to play, watch movies and TV shows. Everything you can do in your browser is here, and most basic consumption tasks are catered for.

Don’t expect any hardcore gaming, or to edit HD video or create elaborate graphics in Photoshop. This is very much not a desktop OS. If anything, it’s closer to its Android cousin in functionality. Which begs the question: If you have a laptop, and you have a tablet, why would you buy a Chromebook? In short, you wouldn’t. But that’s not to say others shouldn’t.

The Chromebook in question here is HP’s Chromebook 11. A slim, light device, it retails for $279. That’s it. That’s cheaper than almost any other laptop, and more so than most similarly sized tablets. It’s made of glossy plastic, in piano black or white, with the latter featuring either red, blue, yellow or green inserts.

It’s a completely sealed device — there are no holes except for the USB ports, power port and the headphone socket — which means no fans spinning inside. The Chromebook doesn’t need them, there are no moving parts. It has a Samsung-made dual-core Exynos processor, and 16GB of flash storage. No hard drive, no fans, no noise or added weight. Pick it up — you can carry the Chromebook comfortably in one hand — and you’ll likely be surprised at just how little it weighs. The all-plastic build won’t win over any MacBook users, but it doesn’t feel like it’ll fall apart at the first drop, either — though that glossy plastic loves fingerprints.

Open it up, and you’re greeted by an 11-inch, 1366×768 IPS display, surrounded by a matte plastic border and topped with a camera — for use with Google Hangouts, naturally. It’s a decent screen, offering 400-nitsof brightness and some very useable viewing angles. The low resolution isn’t a huge concern at this size, but it certainly lacks in comparison to higher-res screens or even 1080p Android tablets, which share its 16:9 aspect. YouTube videos playing at 720p will look just fine, as will most websites and your Facebook photos — though the low resolution means you’ll need to scroll much more while reading a normal webpage.

Given its laptop aspirations, the Chromebook naturally features a full QWERTY keyboard and touchpad. The former is a surprisingly decent affair. They keys are big, matte and reasonably spaced given the confines of the dimensions, though it took me a couple of days to adjust to a respectable typing speed with minimal mistakes — though this may have more to do with coming from a 17-inch laptop than anything else. The keys have a decent amount of travel, but they’re not as comfortable to type on for extended periods of time. (I’m writing this review on the Chromebook 11 and I can feel fatigue setting in already.) Windows users will be pleased to know that many of the standard Windows keyboard shortcuts are here, so you won’t lose any timesaving key presses. There are a couple of odd omissions, however. The caps-lock key has been replaced by a search key, though it can be used as a caps-lock key by pressing alt and search. The biggest gripe, though, is the lack of a delete key. It’s a small thing, but I really began to miss it in the first few days, particularly while adjusting to the keyboard’s size.

The touchpad is less of a success. It’s a shame, really, as it’s a very decent size, and the palm rests on either side are generous. However, using the touchpad for fine controls — such as navigating the small buttons in our website-editing software, or scrolling over drop-down lists while browsing — is an exercise in frustration. The touchpad itself is matte plastic, but with a coating that manages to be slippery, yet also allows your finger to drag and skip as you swipe over it. It’s such a bizarre user experience, not aided by the jittery nature of the cursor or the lag found when using multi-touch gestures. Two-finger scrolling was constantly jumpy, regardless of content — though, two-finger taps to right-click always registered immediately. The touchpad’s mediocre responses made long periods of use, particularly for work, a very irritating experience. I longed for my proper laptop.

And, really, that’s the key here — the Chromebook isn’t a laptop. Full-fat Windows machines leave it in the dust for accomplishing work. My Surface tablet, even, allows for greater multitasking and much better productivity. The Chromebook 11’s dual-core processor can’t hold up to everything you’d normally throw at it — YouTube, Google’s own product, was slow to load and occasionally just refused to work. However, the Chromebook really does excel at one thing: mobile work. I took it with me on a typical day — a morning meeting, during which it browsed through our online planning software and multiple websites; followed by several hours in Starbucks working on articles, writing emails and occasionally browsing the Internet. By 6 p.m., the Chromebook still had 9 percent battery left, and was optimistically stating it would survive for a further 32 minutes. My laptop would have bitten the dust hours before without a charger. Similarly, I took the Chromebook with me to the barber, and as I waited for my haircut, sat down and wrote a good portion of this review. The instant-on resume and featherly weight allows for the kind of functionality we take for granted in tablets and smartphones.

Another caveat: If you have a tablet, you have the kind of instant usage that the Chromebook touts, and modern tablets will run rings around it in terms of performance. If you have a laptop and a tablet, you don’t need the Chromebook. If you don’t have a laptop and will only use it for document editing and email, the Chromebook starts to make sense — except that for $50 more, Microsoft will sell you an ASUS Vivobook with Windows 8 and an 11.6-inch touchscreen in its Microsoft Store. The Chromebook can’t come close to offering the breadth of capabilities of Windows 8 — and at $329 the Vivobook isn’t hideously expensive in comparison.

Google and HP tout the Chromebook 11 as a laptop for everyone. No, it isn’t. As a first laptop for a school student, yes. A simple-to-use Internet device for an older person, yes. As a mobile solution for those who need to do simple work on the move, yes. For everyone else with a tablet, a small laptop or who needs to do something more intensive than write a document or browse the Internet, the Chromebook 11 comes up short. To market it as a laptop is a slight fallacy on Google’s part. Chrome OS just isn’t deep enough to warrant the term, and the Chromebook 11 is too underpowered to accomplish anything more than basic Web browsing and apps. It’s a charming, very inexpensive, well-made evolution of the oft-criticized netbooks of the late ’00s — but it certainly isn’t for everyone.

Rhuaridh Marr is Metro Weekly's online editor. He can be reached at rmarr@metroweekly.com.
← Previous Story Google’s Nexus 5 smartphone launches for $349 — and it’s already sold out
Next Story → Google and Bing to block 100,000 child abuse search terms