By John Riley on November 4, 2013 @JohnAndresRiley

U.S. Rep. Michael Michaud (D-Maine), a six-term congressman and the presumptive Democratic nominee for governor in 2014, officially acknowledged he was gay in a Nov. 4 op-ed published in the Bangor Daily News and in the Portland Press-Herald, Maine’s two largest newspapers. 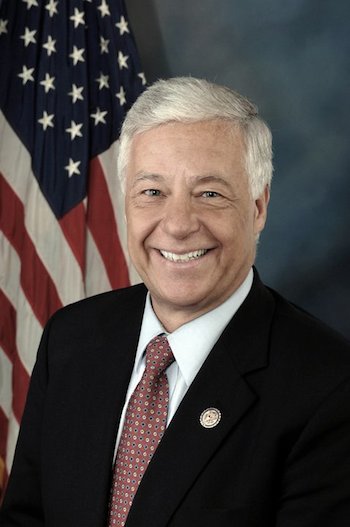 Michaud’s “coming out” makes him the eighth openly LGBT elected official in Congress and, currently, longest-serving LGBT member of the House of Representatives, supplanting Jared Polis (D-Colo.), who was elected in 2008. U.S. Sen. Tammy Baldwin (D-Wis.) previously served seven terms before being elected to the Senate last year.

Michaud, one of only 15 members of the conservative Blue Dog Coalition within the House Democratic Caucus, has been a supporter of LGBT rights during his career, supporting marriage equality and employment nondiscrimination legislation despite representing northern and eastern Maine’s more conservative enclaves. He was one of seven legislators who voted against the 2007 version of the Employment Non-Discrimination Act that passed the House, due to the bill’s failure to provide protections to members of the transgender community.

He announced in August his plans to run against Maine’s incumbent governor, Paul LePage (R), a tea party supporter known mostly for his controversial rhetoric and combative style of politics.

In the op-ed, Michaud wrote that he had decided to come out as gay to preempt any whisper campaigns or push polls implying he was homosexual. Noting that those opposed to his gubernatorial run were already distorting his record and stances on abortion and his support for military veterans, Michaud accused his detractors of trying to make people question whether he was gay.

“Allow me to save them the trouble with a simple, honest answer: ‘Yes I am. But why should it matter?'” he wrote.

“That may seem like a big announcement to some people,” Michaud continued. “For me, it’s just a part of who I am, as much as being a third-generation millworker or a lifelong Mainer. One thing I do know is that it has nothing to do with my ability to lead the state of Maine.”

Michaud also said that his personal life has never factored into how he performs at his job, and vowed that would not change if he became governor. He also vowed not to discuss his personal life or negatively attack those of his opponents, the two most prominent being LePage and the former Independent candidate for governor in 2010, Eliot Cutler.

“Most of all, I was brought up believing you should judge a person based on the content of his or her character, not by his or her race, ethnicity, gender or sexual orientation,” Michaud wrote. “That’s a value I know most Mainers share. Growing up in a large Franco-American Catholic family, it’s never been in my nature to talk about myself. I write this now merely to let my opponents and the outside interests who fund them know that I am not ashamed of who I am. And if seeing someone from my background, in my position, openly acknowledge the fact that he’s gay makes it a little bit easier for future generations to live their lives openly and without fear, all the better.”

If elected, Michaud would become the first openly gay or lesbian person in the country to be elected governor of a state. In Maryland, State Del. Heather Mizeur (D-Montgomery Co.), is also seeking to claim that honor. Taking to Twitter, Mizeur tweeted, “@repmikemichaud Best wishes for your race — the 2013 class of #LGBT Governors just doubled in size!”

The Maine Democratic Party also released a statement applauding Michaud’s willingness to come out as gay.

“The Maine Democratic Party applauds Congressman Michaud’s courage and grace in addressing such a deeply personal issue,” the statement read. “Maine deserves a governor who has the strength of character to take on tough issues. No matter what it may be, Mike Michaud is not going to back down from any challenge. We commend him for making this honest and brave announcement.”

John Riley is the local news reporter for Metro Weekly. He can be reached at jriley@metroweekly.com
← Previous Story Republican Sen. Dean Heller comes out in support of ENDA
Next Story → Senate advances ENDA toward final vote