By Justin Snow on November 6, 2013 @JustinCSnow 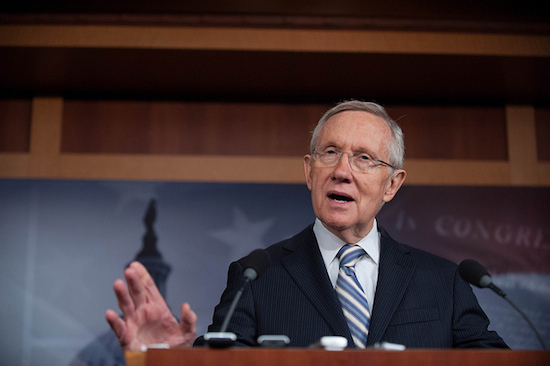 Majority Leader Harry Reid expressed confidence Wednesday that the Employment Non-Discrimination Act will pass the Senate tomorrow, while blasting the chamber across the hall for blocking the landmark LGBT-rights bill.

During a roundtable discussion with a small group of reporters at the Nevada Democrat’s office inside the Capitol, Reid said ENDA supporters will apply political pressure on the Republican-controlled House of Representatives to allow the bill to come to the floor for a vote.

“I think the House is going to have to capitulate,” Reid said. “If they have any hope of having a president that can be a viable candidate or they think they can elect some Republicans and they want to hang on to the House, they’ve got issues.”

Reid expressed frustration with the lack of movement on a number of issues that have passed the Senate but stalled in the House, including immigration reform, a farm bill, marketplace fairness and postal reform.

“They’re going against the will of the people,” Reid said of House Republicans, adding that they’ve managed to offend everyone. While ENDA, which would prohibit most employers from discriminating on the basis of sexual orientation or gender identity, could soon join the ranks of those bills as soon as Thursday, Reid said those who wish to see those bills become law could join in “one loud chant” to force the House to act.

“I think we’re better off joining ENDA with the other things that the House has held up,” Reid said. “I think pretty soon this starts looking like the House is living in some other world, so I think we would work on it that way.”

Reid said he agrees with a suggestion by House Minority Leader Nancy Pelosi, who has said pointed to tactics used to force the House leadership’s hand to bring the Violence Against Women Act (VAWA), which included LGBT protections, to the floor earlier this year as a potential strategy on ENDA. Stating Democrats made the issue “too hot to handle” in public, Pelosi told reporters she would hope a similar situation would play out with ENDA.

Reid dismissed the possibility of a discharge petition, which would force the bill to the floor without the support of House leadership if 218 members sign on, noting that House Speaker John Boehner has reigned in his caucus from participating in such a legislative maneuver before. He also said gridlock would make it unlikely for ENDA to be attached to something like the Defense Authorization bill.

Shortly after Reid’s remarks, the Senate approved by a voice vote an amendment to ENDA proposed by Republican Sen. Rob Portman (Ohio). The amendment pertains to government retaliation against religious organizations, and Reid said Portman and Sen. Kelly Ayotte (R-N.H.), who both voted for cloture, suggested the amendment as “a reason for joining the bill.”

Although that amendment, which was also supported by Republican Sens. John McCain (Ariz.), Dean Heller (Nev.) and Orrin Hatch (Utah), may be the key to securing additional Republican support, ENDA’s religious exemption has received criticism from some liberal groups that argue it is too broad. Opponents of the religious exemption argue, for example, that the provision as written could allow for a Catholic hospital that employs people of other faiths to still be able to fire or refuse to hire an LGBT person.

“There’s nothing that we do that’s perfect. You do the best you can,” Reid said in response to those criticisms. “The goal is to get something passed and move forward. This allowed us to move forward. Does that mean this bill is perfect? Of course not.”

With ENDA expected to be wrapped up in the Senate by tomorrow afternoon, Reid said he was proud of the upper chamber for the progress that has been made on a bill that has languished in Congress for decades. A Senate vote on final passage this week would be the first in 17 years, when ENDA failed by one vote in 1996 the day after the same chamber approved the Defense of Marriage Act.

“I think it’s important for the Senate as an institution,” Reid said, adding that he is particularly proud of his caucus for unanimously supporting the bill.

ENDA cleared a procedural Senate vote Monday evening 61-30 with the support of seven Republicans. No Republicans stood to oppose the bill.

On growing support for ENDA, Reid said, “It’s like everything in life, this legislation is no different than anything else. It’s no different than your personal relationships that you have with people — they never stay the same. You either go forward or backwards.”

When the Senate votes on ENDA, it will also mark the first time either house of Congress has considered a version of the bill with protections for transgender Americans.

“As I’ve grown on this issue I think I’m with a lot of the American people. One time it was a big deal to people to try to understand transgender. That held up this legislation for a while, I’m confident of that,” Reid said. “And to the credit of the HRC and other groups, when we wanted to move forward without that they said no.”

Reid continued, “With my five children, it’s a nonissue. But for my three adult grandchildren it’s a non, non, non, non issue. They can’t imagine why anyone gives a damn.”