By Justin Snow on November 8, 2013 @JustinCSnow 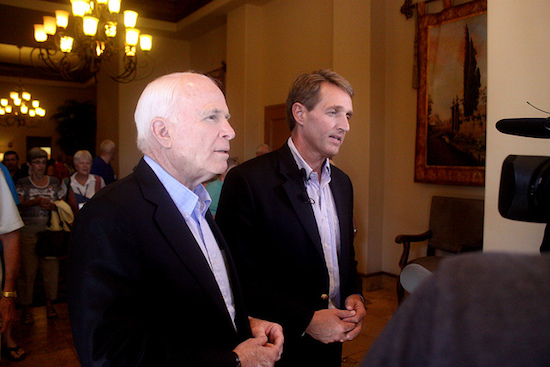 Republican Sen. Jeff Flake had just concluded a speech urging his colleagues to find ways to reduce the nation’s budget and deficit when Sen. Jeff Merkley arrived on the Senate floor and asked permission to have a short colloquy with Flake and Sen. Tammy Baldwin.

It was about two hours before the Senate was scheduled to vote on final passage of the Employment Non-Discrimination Act, and Merkley and Baldwin — two of the bill’s lead Senate sponsors — were looking to shore up support.

“I appreciate so much the comments of my colleague from Arizona on the challenges inherent in getting our budget under control and I’ve particularly appreciated over the last few days the conversation we’ve had over the Employment Non-Discrimination Act,” Merkley said, pivoting from one issue to the next. What ensued during the next several minutes was pure legislative maneuvering. Merkley and Baldwin both thanked Flake for the thoughtful conversations they have had over the past few weeks, and Merkley said Flake had “brought particular value in expressing concerns about how we make sure businesses have the guidances to implement this act effectively.”

For Flake, who served in the House of Representatives before being elected to the Senate in 2012, his concerns with ENDA stemmed from protections for transgender Americans. As a member of the House, Flake was one of several Republicans to vote for a version of ENDA in 2007 that only prohibited discrimination on the basis of sexual orientation.

“Those added provisions have concerned me in terms of potential cost of litigation or compliance,” Flake said of gender identity provisions on the Senate floor. “I still have those concerns and I hope as we work through the process as this bill moves to the House we can find ways to make sure employers can implement these provisions that is reasonable and proper.”

The colloquy lasted only about five minutes, but when ENDA faced a final vote, Flake voted yes. A Senate source told Metro Weekly Flake wanted assurances that businesses would receive guidance on how to handle gender transitions, and Thursday morning Merkley and Flake decided to hold a colloquy so the issue would enter the congressional record. With the sense that businesses would be provided with that guidance, Flake decided to vote for the bill.

After Flake cast his yes vote, Merkley came up and shook Flake’s hand, while Baldwin — the chamber’s first out member — gave him a pat on the back.

Flake was one of 10 Senate Republicans to vote to outlaw LGBT workplace discrimination with a 64-32 vote yesterday. It was the most Senate Republican votes ever cast for a piece of gay rights legislation, let alone one that contains gender identity provisions. In comparison, only eight Senate Republicans voted for the repeal of “Don’t Ask, Don’t Tell” in 2010.

During a procedural vote on ENDA earlier this week, Ayotte and Portman could be seen in full view of the public and press galleries negotiating with some of the bill’s most vocal backers in a Senate cloakroom, including Merkley and Majority Leader Harry Reid, before emerging to cast their yes votes on cloture. Their support rested on the adoption of an amendment that strengthened ENDA’s religious exemption, and was fully supported by ENDA’s sponsors as well as groups such as the Human Rights Campaign.

“As I said in 2007 when I voted for the Employment Non-Discrimination Act in the House, one of the most important constitutionally mandated functions of the federal government is to protect the rights of individuals,” Flake said in a statement after his yes vote. “While I had concerns about expanding protections beyond those House provisions, after consideration, I believe supporting this bill is the right thing to do. I am hopeful that the bill moves forward in a way that works for employers as well as employees.”

During an interview at his Senate office the morning of ENDA’s final vote, Merkley told Metro Weekly the bill’s supporters have worked to dispel the arguments against what he has called an issue of fairness and equality.

“I think we’ve answered all the main concerns, thus the vote should be 100-0 today in favor of ending discrimination,” Merkley said. Although ENDA did not pass with the full support of the Senate, the support it did receive was no less significant.

It was a sign of the times that during ENDA’s journey through the Senate, only one Republican stood to oppose the bill: Sen. Dan Coats of Indiana. While legislation dealing with sexual orientation, let alone gender identity, once had the ability to stir impassioned debate, the wedge appears to have lost its edge.

“There was no evidence of the Senate Republican leadership whipping the bill,” wrote Human Rights Campaign Vice President Fred Sainz. “Organizational opposition has been anemic (I’m being polite) and steeped in animus as opposed to substance.”

ENDA’s Senate passage illustrated a regional divide among Republicans as well. Those Republican senators voting yes came from New England, the Midwest, Southwest and Alaska. No Republican from the South voted for ENDA.

Republican support has been critical to ENDA’s passage in one house of Congress, and it will be even more critical if the bill is to ever become law. While ENDA faced little vocal Republican opposition in the Senate, the story could be different as the bill heads down the hall to the Republican-controlled House of Representatives. House Speaker John Boehner has said he opposes ENDA, making it increasingly less likely that he will even allow the bill to be brought to the House floor for a vote. Five House Republicans are co-sponsors of ENDA.

For Senate Democrats, Boehner’s opposition to ENDA is not only a subject of frustration, but of political opportunity.

“Everyone talks about gridlock in Washington. It rests with one man – Speaker Boehner. That’s the problem,” said Sen. Chuck Schumer (D-N.Y.). “The House of Representatives has become a legislative black hole. It’s the broken cog in our governmental wheel.”

“Anyone who is a student of history knows that our history books are littered with those figures who said we just can’t end that discrimination based on race, based on age, based on disability, based on gender,” said Sen. Dick Durbin (D-Ill.). “Think about their place in history today.”

According to Merkley, every argument Boehner has made against ENDA — that it’s already illegal to discriminate against LGBT people, that ENDA will spur abusive lawsuits and that it could hurt job growth — is unfounded.

“I hope Speaker Boehner will find – in the solitude of his office as he talks with people who know this territory – that his arguments are without merit, and to block consideration of a bill related to the oppressive discrimination of millions of Americans is just wrong,” Merkley said. “I hope he’ll come to that understanding.”

For Harry Reid, who has led the Senate’s Democratic majority since 2007 and witnessed House leadership shift from Democratic to Republican, opposition to ENDA speaks to a broader issue: “I think the House is going to have to capitulate,” Reid said. “If they have any hope of having a president that can be a viable candidate or they think they can elect some Republicans and they want to hang on to the House, they’ve got issues.”