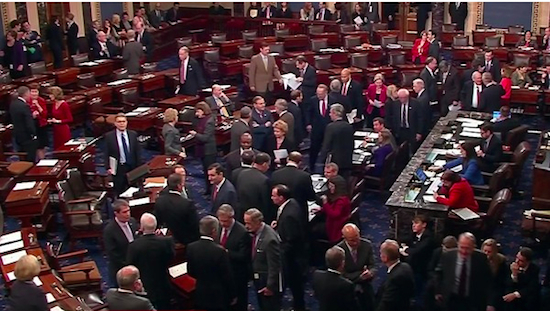 The Employment Non-Discrimination Act has cleared its last hurdle before a final vote by the U.S. Senate.

The Senate is expected to vote on final passage around 1:45pm.

The cloture vote came after the Senate rejected 43-55 an amendment proposed by Toomey that would have addressed ENDA’s religious exemption. ENDA’s lead co-sponsors in the Senate argued the amendment was overly broad and could open the door for discrimination by for-profit organizations

Sen. Jeff Merkley (D-Ore.), ENDA’s champion in the Senate, told Metro Weekly that while Toomey’s amendment was well intentioned, he believed it had the potential to dismantle the protections ENDA seeks to establish.

“[The amendment] essentially means the exemption could encompass anyone who doesn’t want to establish a nondiscrimination policy,” Merkley said.

Several senators who had otherwise indicated their support for ENDA voted for the amendment, including Portman, Ayotte and Hatch. Sen. Mark Pryor was the only Democrat to vote for the failed amendment.

A final vote by the Senate will be the first since ENDA failed by one vote in 1996.