By Justin Snow on November 1, 2013 @JustinCSnow 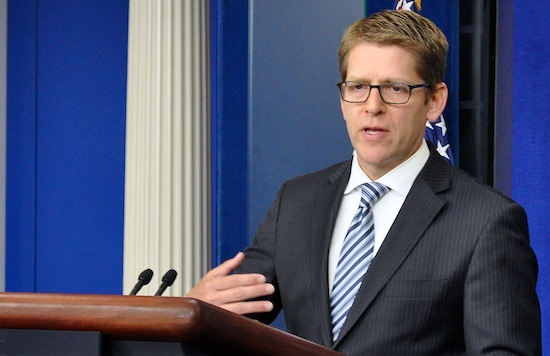 With a Monday evening vote on the horizon in the Senate, the White House expressed its strong support for the Employment Non-Discrimination Act today, urging every senator to vote in favor of the landmark LGBT-rights bill.

White House press secretary Jay Carney told reporters the Obama administration is encouraging those senators who remain undecided on ENDA to cast a yes vote when the bill reaches the floor.

“We’re making clear to every senator who may be on the fence or who may not have expressed support for it that we strongly believe that a yes vote is the right vote on this legislation. So we’re working towards that end,” Carney said.

Senate Majority Leader Harry Reid filed cloture on ENDA yesterday, setting the stage for a vote to proceed to debate Monday. The latest movement comes after the bill secured the support of every Democratic senator earlier this week. In recent days, ENDA’s three Democratic holdouts in the Senate — Bill Nelson (Fla.), Mark Pryor (Ark.) and Joe Manchin (W.V.) — all signaled their support for the bill.

“The president has long supported an inclusive Employment Non-Discrimination Act, which would enshrine into law strong, lasting and comprehensive protections against employment discrimination on the basis of sexual orientation or gender identity. And his administration has and will continue to work to build support for it,” Carney said. “What we have seen is progress as that bill has moved through committee and now will get a vote in the full Senate.”

Although the White House has declined to provide details of its legislative strategy, Carney’s remarks come as ENDA supporters remain focused on a handful of key Republican senators who have yet to express their support or opposition to the bill in the final hours before Monday’s vote. A principal player involved in that effort echoed to Metro Weekly statements that have been made by ENDA’s lead sponsor in the Senate, Jeff Merkley (D-Ore.), noting those key Republican senators — who include Rob Portman, John McCain and others — are focused on feeling confident in voting yes and being on the right side of history. Merkley himself has said neither the White House nor President Obama are key to shoring up support among Republicans.

“I think counting votes in the Senate is something experts of the Senate do,” Carney said when asked if the White House is confident ENDA will pass. “We know that it’s the right thing to do and we fully support it.”

A Senate vote on ENDA will be the first since the bill came one vote shy of passage in 1996, the day after that same chamber approved the Defense of Marriage Act.