By Randy Shulman on December 19, 2013 @RandyShulman 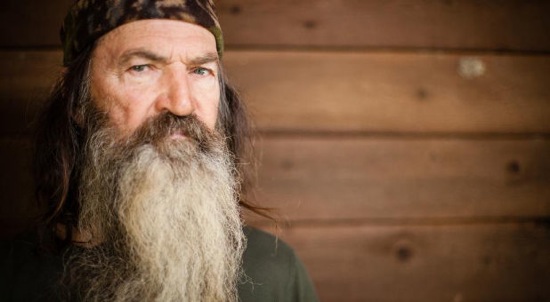 “It seems like, to me, a vagina — as a man — would be more desirable than a man’s anus. That’s just me. I’m just thinking: There’s more there! She’s got more to offer. I mean, come on, dudes! You know what I’m saying? But hey, sin: It’s not logical, my man. It’s just not logical.”

Phil Robertson, the 67-year-old patriarch featured on the hit A+E series, Duck Dynasty, in the January issue of GQ magazine. When the article’s author, Drew Magary, asked what Robertson considered sinful, the self-proclaimed “Bible-thumper” responded, “Start with homosexual behavior and just morph out from there. Bestiality, sleeping around with this woman and that woman and that woman and those men…. Don’t be deceived. Neither the adulterers, the idolaters, the male prostitutes, the homosexual offenders, the greedy, the drunkards, the slanderers, the swindlers — they won’t inherit the kingdom of God. Don’t deceive yourself. It’s not right.”

Robertson also made horribly insensitive remarks about the black community, claiming they were “happy and singing” working the fields in the pre-Civil Rights era and “no one was singing the blues.”

The network suspended him from the show, citing in a statement, “We are extremely disappointed to have read Phil Robertson’s comments in GQ, which are based on his own personal beliefs and are not reflected in the series Duck Dynasty. His personal views in no way reflect those of A+E Networks, who have always been strong supporters and champions of the LGBT community.” The network has placed Phil under hiatus from filming indefinitely.