Like all of the best characters invented by Joel and Ethan Coen, Llewyn Davis is a loser. He’s hugely talented, terribly haunted, and the persistent theme of his life is failure. He’s a loser. He cannot escape that fate.

Inside Llewyn Davis reminds him of this — again and again and again — as Llewyn treks across New York City, out to Chicago, and hitches back East, only to find himself in the exact same place where he began. It’s cruel, really. Llewyn is a folk singer trapped in a temporal joke, doomed to forever live out the last days before Bob Dylan transformed his local scene into the most influential artistic force in America. He’s Sisyphus with a guitar. 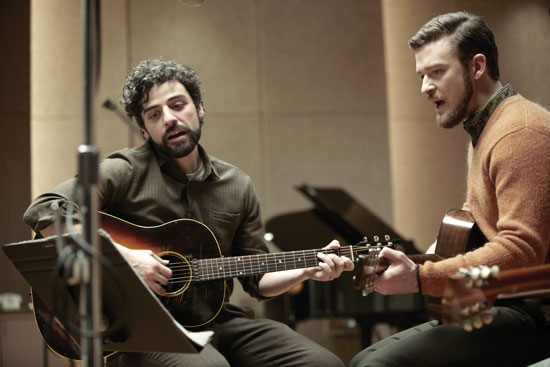 We first meet Llewyn (Oscar Isaac) inside the Gaslight Café, as he performs a haunting rendition of “Hang Me, Oh Hang Me” to an earnest audience of proto-beatniks. “If it was never new, and it never gets old, then it’s a folk song,” he says, with a hint of routine in his voice, as he shuffles off the stage. He chitchats with the owner for a minute, who tells him a “friend” is waiting for him in the alley out back. Llewyn steps outside, not recognizing the silhouetted man in a hat. The man is not his friend. This alien punches him in the face, kicks him in the gut, and then saunters away as Llewyn writhes in pain on the ground.

This is how we meet Llewyn Davis. He gets his ass kicked by a stranger, in the alley behind a bar where he plays for tips to a crowd he disdains. Even for filmmakers like the Coens, who have spent years tormenting characters on the fringe, this is a glum introduction to their unique brand of misanthropy. And it gets much, much worse.

The Coens make three types of movies. They have their comedies, which transform the surreal into a punchline. (See: the nihilists in The Big Lebowski.) They have their thrillers, which focus on the horror of the existential. (See: Anton Chigurh’s roadside murder in No Country For Old Men.) And then, they have something else. Inside Llewyn Davis is the latest addition to that third, neurotic category. The movie has no real hero, since Llewyn never wins. It has no real villain either, although some of Llewyn’s acquaintances disdain him like no other. So, what is this movie? Like A Serious Man, Inside Llewyn Davis is an introspective drama. The tragedy hides within.

The biggest difference between A Serious Man and Inside Llewyn Davis, however, is that this time around, the Coens don’t seem to enjoy torturing their lead character. The playful cruelty never goes away, but Llewyn isn’t a Job-like puppet for their philosophical games. The Coens have empathy for their creation. It’s real, honest-to-God compassion. They just can’t help themselves. They can’t not mess with him.

The movie keeps throwing obstacles at Llewyn, as we puzzle through his murky backstory. With no place of his own, Llewyn revolves between several couches in several apartments across New York City. After a stay with the Gorfeins, an older couple who live on the Upper West Side, he’s stuck lugging around their orange tabby cat. When he tries to stay with his musician friend Jim (Justin Timberlake), Jim’s frosty girlfriend Jean (Carey Mulligan) greets him with profanity, reveals that their regrettable, off-screen tryst left her pregnant, then demands money for an abortion. (Him: “You know the expression, ‘It takes two to tango’?” Her: “Fuck you.”)

The better part of Inside Llewyn Davis continues this way, when it’s not flooring audiences with musical performances overseen by T. Bone Burnett. (The “live” music is, in fact, live.) Llewyn goes somewhere, Llewyn gets upset, Llewyn wears out his welcome, then Llewyn goes somewhere else. Wherever he goes, failure follows. It’s inescapable.

Perhaps that’s why it’s hard to shake the feeling that Inside Llewyn Davis deserves a folk song of its own. Ever hear the one about the musician who could’ve been Bob Dylan? It’d be sad, if it weren’t so funny. It’d be funny, if it weren’t so sad. His story was never new, and it’ll never get old, either.