No doubt you first heard Betty Who a few months ago, courtesy of Spencer Stout’s elaborately choreographed marriage proposal to his boyfriend, Dustin. You know, the one set at a Utah Home Depot?

“I didn’t know them beforehand,” says Who, whose song “Somebody Loves You” was the soundtrack to the incredibly popular video, which, to date, has registered nearly 11 million views on YouTube. “I wish I was that smart. Are you kidding? It was totally a shock, surprise, amazing thing that happened.” The U.S.-based singer-songwriter, born Jessica Newham in Australia, couldn’t have planned that kind of publicity. In fact, she wouldn’t have planned it, at least not like that. 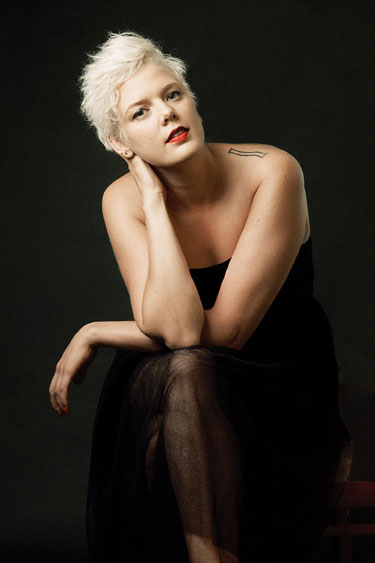 “That song is actually a breakup song,” Who explains. “I was leaving this relationship really devastated and sad. … So it’s kind of funny that it ended up being this incredibly sweet love song that people use to propose to each other with.”

Who has since met the “amazing” couple — who initially discovered her on Spotify — and treated them to dinner. “I was like, ‘I owe you dinner. You changed my life!'” For the record, though, Who was already in talks to sign with RCA Records months before the video went viral — that just pushed everyone to move faster.

The 22-year-old Who has known since she was 12 that she wanted to be a pop musician, though she studied classical cello as a high school student at Michigan’s famed Interlochen Center for the Arts. Who is incredibly grateful to her parents for all their support — from moving with her halfway around the world to pursue her musical career, to raising her as an early supporter of the LGBT community.

“I grew up in Sydney, and my mom’s best friends were all gay men,” Who laughs. “So I’m very familiar with the gay community and I love being an ally.” Who has recently performed at events for the Trevor Project and New York’s Hetrick-Martin Institute.

These days Who is chiefly focused on writing songs for her debut album. She’s aiming for a spring 2014 release. “I have no illusion of creating anything near as good as the Thriller album,” says Who, after citing Michael Jackson as her biggest musical influence. “But one can only try.” ‘