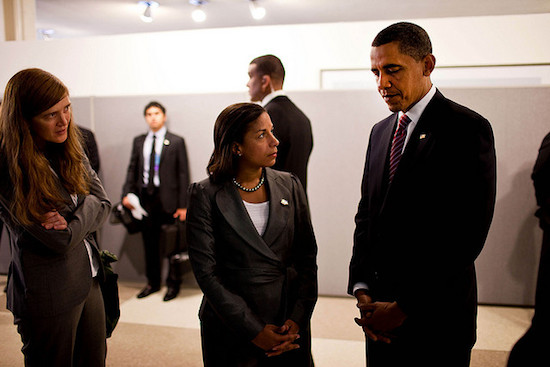 The country’s top diplomat to the United Nations called Russia’s anti-LGBT law “as outrageous as it is dangerous” during a Tuesday meeting with LGBT-rights activists in New York City.

Samantha Power, the U.S. ambassador to the UN, said the recently enacted Russian law prohibiting “propaganda of nontraditional sexual relations” was an indication of the work that remains changing hearts and minds across the globe on the issue of LGBT equality.

“We are well into the 21st century and yet some seventy-eight countries still have laws that criminalize consensual sex between adults,” Power said before opening a roundtable strategy session on advancing LGBT rights abroad. “In some countries, the sentence for being gay is still the death penalty.”

The Russian law has been a point of international controversy since it was signed into law by Russian President Vladimir Putin in June. While the Obama administration has dismissed calls for a boycott of the Olympic Games, President Barack Obama has condemned the law in the lead up to the Winter Olympics set to be held in Sochi this February.

Speaking at Tuesday’s roundtable, Power said the Russian law acts as “a reminder that whether the struggle for equality takes the form of equal employee benefits or protection from being imprisoned or executed, we have a long way to go.”

“Let’s be clear: To criticize the criminalization of LGBT status is not cultural imperialism,” Power added. “And to deny gays and lesbians the right to live freely – and to threaten them with discrimination or even death – is not a form of moral or religious puritanism. It’s in fact barbarism.”

The roundtable discussion was also attended by Masha Gessen, a Russian-American, lesbian journalist who has been forced to flee Russia as the country considers legislation that would allow courts to take away children from LGBT parents. Gessen has said the Russian government under Vladimir Putin has launched “an all-out war on LGBT people” and warned that conditions will only grow more dire once international attention shifts away from Russia at the conclusion of the winter games.

Power’s speech comes as nations around the world recognize Dec. 10 as Human Rights Day. Earlier today, Olympic officials announced the Russian government would create protest zones in Sochi during the games and demonstrators will not face negative consequences.

During a speech last week at the annual summit of the organization Human Rights First, National Security Advisor Susan Rice said the many issues on which the U.S. cooperates with Russia do not eclipse differences on human rights.

“[A]s we meet these mutual challenges, we don’t remain silent about the Russian government’s systematic efforts to curtail the actions of Russian civil society, to stigmatize the LGBT community, to coerce neighbors like Ukraine who seek closer integration with Europe, or to stifle human rights in the North Caucasus,” Rice said. “We deplore selective justice and the prosecution of those who protest the corruption and cronyism that is sapping Russia’s economic future and limiting its potential to play its full role on the world stage.”

According to Rice, who served as Power’s predecessor at the UN, advancing democracy and respect for humans rights is central to U.S. foreign policy.

“We stand proudly for the rights of women, the LGBT community and minorities,” Rice said.