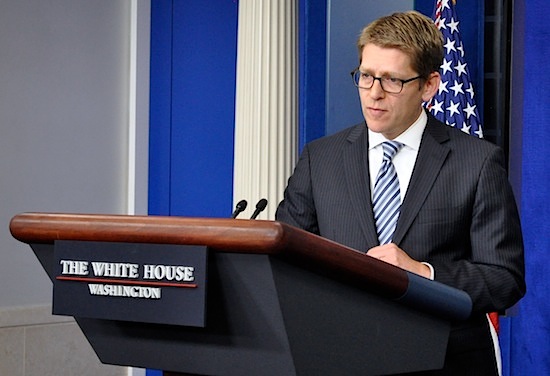 The White House is downplaying any message of condemnation of Russia’s anti-LGBT law that could be perceived from the composition of the U.S. delegations to the Winter Olympics in Sochi, Russia.

Speaking to reporters Wednesday, White House press secretary Jay Carney said the delegations for the opening and closing ceremonies of the Olympic Games represent “the diversity that is the United States,” but declined to state emphatically whether they were composed as a means to rebuke Russia for a recently enacted anti-LGBT law.

Announced yesterday, the U.S. delegations will be led by former Department of Homeland Security Secretary Janet Napolitano, who is now president of the University of California system, and will include two out lesbian athletes — Billie Jean King and Caitlin Cahow.

Neither President Obama and first lady Michelle Obama, Vice President Joe Biden and Dr. Jill Biden, nor any current members of Obama’s cabinet will attend the games. Although the White House has stated the president’s schedule does not permit him to travel to Sochi in February, it has not explained why no other high-ranking U.S. officials will attend.

According to Carney, the White House would not wait to send a message condemning the Russian law prohibiting “propaganda of nontraditional sexual relations” through this manner.

“The president has been very clear that he finds it offensive, the anti-LGBT legislation in Russia, for example, and we take a very clear, strong stance on that issue as well as the curtailment of civil society in Russia, as well as the harassment caused to those who protest corruption in Russia. Issues we have with Russia we are very upfront about,” Carney said.

Indeed, Obama, along with a number of top government officials, have been critical of Russia’s enactment of the anti-LGBT law since it was signed by Russian President Vladimir Putin in June.

“We have made no bones about the fact that we strongly oppose and are offended by the anti-LGBT law in Russia,” Carney continued. “We’ve made very clear, have not pulled any punches in talking about the fact that we expect Russia to conduct the Olympic Games in Sochi that demonstrate full respect and regard for participants in those games from all over the world and from all walks of life. And I think that the purpose of any delegation to the games is to showcase the strengths of the country sending the delegation and that’s what this delegation does.”

Asked if Obama would encourage the U.S. delegations to publicly condemn the law, Carney demurred, stating simply that there is no expectation the delegations to the Sochi Olympics will conduct themselves any differently than previous delegations.

Although the White House will not address whether Russia’s anti-LGBT law was in mind while drafting the delegations, LGBT-rights groups have commended the gay-inclusive delegations as sending a clear message to Russia and the world that the U.S. values the civil and human rights of LGBT people.