Home / Arts + Entertainment / Film / All About the Money

All About the Money

American Hustle is of and about bullshit. Director David O. Russell soaks in it, drenching his movie with scams so shrewd it’s tough to tell the suckers from the schemers. Is the mafia getting conned? The feds? The crooked politicians? Or, maybe, does Russell pull a fast one on us?

I say it’s all of the above. This is a movie about American dreams, greased with egoism and fraud and deception. It’s not the characters or the story, either. The first frame shown on screen is simple, white text against a black background: “Some of this actually happened.” 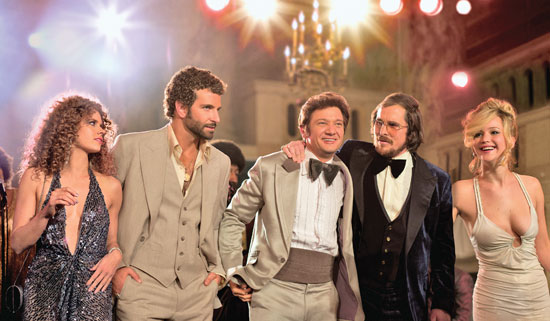 In other words: “Do not trust what you see. We will lie to you.”

We first meet Irving Rosenfeld (Christian Bale), a small-time con artist, as he prepares an elaborate comb-over in front of a hotel-room mirror. Even his hair is not to be believed, it seems. Irving and his girlfriend, Sydney (Amy Adams), are forced accomplices to a sting operation, led by an arrogant FBI agent named Richie Di Maso (Bradley Cooper). Di Maso caught the pair pulling loan rip-offs, so he cuts a deal with them: If they help him catch criminals, they stay out of prison. The plot, loosely based on the Abscam scandal of the late 1970s, eventually balloons to ensnare Irving’s wife, Rosalyn (Jennifer Lawrence), as well as mayors and congressmen and mafioso — and Irving’s stuck in the middle of the whole mess.

This is the sort of movie where details matter, so I won’t reveal much more. Just know that American Hustle boasts one of the best acting ensembles you will ever see on screen. Bale sheds the self-serious style that has defined his career, chewing scenery with delicious flair. Adams is sly and lewd and downright hypnotic, while Cooper handles his own with a goofy sort of swagger. The true star, though, is Jennifer Lawrence. The 23-year-old is all but guaranteed another Oscar for this performance. There’s no doubt about it now: Lawrence is a force of nature.

American Hustle is what happens when a great director, working with great actors, tells a story laced with self-aware themes and messages. If we need reinvention to survive, Russell suggests, isn’t deception needed too? “Necessity is truly the mother of invention,” Irving says in the middle of the hustle. He’s half-right. In the world of American Hustle, deceit abides because it is a necessity.

If American Hustle doesn’t pick you up from your post-holiday malaise — Did you see how cold it’s supposed to be this month? — there’s always The Wolf of Wall Street, Martin Scorsese’s three-hour biography of Jordan Belfort, a penny-stock-trading drug addict who made millions of dollars scamming Wall Street in the 1990s.

Leonardo DiCaprio stars as Belfort, and he’s a terrifying joy to behold. The Wolf of Wall Street is easily his most debauched and unhinged performance to date. This movie appears to have nearly no self-control. Despite its interminable three-hour running time, it never stops sprinting. There are drugs, and booze, and sex, and more drugs, stacked one on top of the other again and again until it’s difficult to remember what’s seen and what’s imagined. Did DiCaprio really just blow cocaine into a prostitute’s ass? How can a human body withstand that many Quaaludes before it collapses into a heap? What kind of person chooses to live like this?

THE WOLF OF WALL STREET

The Wolf of Wall Street is like Scorsese’s Goodfellas, except longer and sloppier. He’s interested in the same things — money, power and society’s frustrating inability to punish those who accumulate them illegally — but this time he uses humor, instead of horror, to make his points. Enter Jonah Hill, who does a remarkable job playing Donnie Azoff, Belfort’s oafish-looking second-in-command. Hill adds humor to ever scene he’s in — including a very, very funny choking hazard — while cajoling DiCaprio to embrace his more absurd instincts. Together, they make one hell of a comedy duo.

Of course, that comedy serves a serious purpose. By painting Belfort as an aggressively narcissistic man — and not a sociopath, for instance — The Wolf of Wall Street turns his story into a scathing parable about greed and ego. Make no mistake: Scorsese thinks Jordan Belfort is a villain. He just understands that some villains never face the punishment they deserve.