2014 promises to be another banner year for the District’s LGBT community, which enjoys – at least on paper – almost full equality with the District’s heterosexual citizenry. And, as it does every two years, this bloc will exert its influence over candidates seeking public office, whether running for mayor, D.C. Council or federal office.

The clout of the District’s sizeable, diverse and diffuse LGBT community is not something any candidate can ignore. Covering every ward in the city, many of the LGBT community’s most prominent residents are unafraid to raise contentious issues or grill candidates about their platforms.

”It’s been clear for a long time that we could not have made progress on policies such as marriage equality if we had just relied on openly gay candidates,” says Richard J. Rosendall, president of the Gay and Lesbian Activists Alliance of Washington, D.C. (GLAA), though speaking solely as a longtime local political observer. Rosendall emphasizes that all D.C. politicians understand LGBT political clout, noting that even during the marriage-equality push in 2009, the two dissenting votes, Councilmembers Marion Barry (D-Ward 8) and Yvette Alexander (D-Ward 7), took to the D.C. Council dais to explain their ”no” votes and tout their contrastingly positive pro-LGBT positions.

”We haven’t had a candidate run a truly anti-gay campaign in more than 30 years,” says Rosendall. ”It’s a proven loser in the District.”

In coming months, the race most likely to draw the attention of LGBT Washingtonians is the race for mayor, which features incumbent and longtime ally Vincent Gray facing eight challengers in the Democratic primary, including Councilmembers Jack Evans (D-Ward 2), Muriel Bowser (D-Ward 4), Tommy Wells (D-Ward 6) and Vincent Orange (D-At Large), all of whom have voting records considered favorable to the LGBT community – though Orange used opposition to marriage equality as part of his unsuccessful 2006 mayoral-campaign platform. Others running in the primary – generally regarded as the de facto election in heavily Democratic D.C., ahead of the Nov. 4 general election – are State Department official Reta Jo Lewis, restaurant entrepreneur Andy Shallal, businessman Christian Carter and local rap artist and music promoter Carlos Allen. 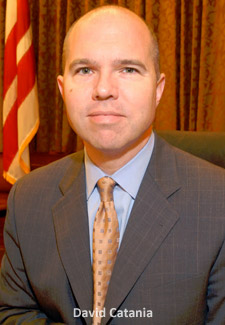 But the elephant in the room is likely to be Councilmember David Catania (I-At Large), a Republican-turned-Independent who has formed an exploratory committee and told The Washington Post‘s Robert McCartney that he would run for mayor if Gray, who is being investigated by federal prosecutors for allegedly running a ”shadow campaign” effort during his 2010 run for mayor, were to win the April 1 Democratic primary.

Catania, one of D.C.’s two openly gay councilmembers, did not tell the Post whether he would run if another candidate won the primary, but if he does jump into the mayor’s race, he would be forced to give up his Council seat.

Rosendall says that, barring a federal indictment, Gray is likely favored to win the primary because the city is doing well and his competitors will likely split the anti-Gray vote. On LGBT issues, Rosendall says, Gray has been a strong supporter of the community, so his Democratic opponents will not gain much leverage with their own supportive records on LGBT rights.

However, says Rosendall, facing Catania in a general election could be a more difficult task, as Catania would seek to pick up the support of Democrats who backed other candidates in the primary. In addition, he notes, Catania has been in the underdog position before, when he was elected as the first openly gay councilmember in a 1997 low-turnout special election in which he ousted appointed At-Large Councilmember Arrington Dixon (D) by turning out his base and capitalizing on voter discontent throughout the city.

Should he choose to run, Catania will not be alone in challenging Gray or any other Democratic nominee. Libertarian Bruce Majors, who is also gay man, might be able to rally conservative votes that would otherwise go to Catania.

Meanwhile, an announced Republican candidate, James Caviness, a public-access television political-talk-show host, failed to submit enough signatures of registered party voters by the Dec. 2 deadline to qualify for the ballot. Another candidate, ”Faith,” did submit enough signatures to qualify for the mayoral ballot representing the D.C. Statehood-Green Party.

If Catania does decide to run for mayor, his departure from the D.C. Council could open the door for another gay hopeful, Republican Marc Morgan. Morgan, who previously ran against incumbent gay Councilmember Jim Graham (D-Ward 1) in a heavily Democratic ward, stands a chance due to a provision requiring two of the Council’s At-Large seats be reserved for non-Democrats. Morgan would face the winner of the Democratic primary – most likely incumbent Anita Bonds (D) – one of two Statehood-Green candidates, and Libertarian Party candidate Frederick Steiner, and could claim victory by being among the top two non-Democrat vote-getters.

”It should be an interesting campaign season,” says Morgan, keeping a lid on his campaign strategy. ”We’ll see what happens.”

Rosendall adds that it is likely Graham will win his re-election bid, largely because any anti-Graham vote will be split between three challengers, including former At-Large Council candidate Bryan Weaver, and Brianne Nadeau, a former ANC commissioner and a former staffer for U.S. Rep. John Sarbanes (D-Md.). Morgan agrees with Rosendall’s odds on a Graham win – even in a one-on-one race, due to his constant visibility at community events and a record of effective constituent service.

Of the three challengers, Nadeau has been the most vocal in calling for Graham’s ouster, attempting to foster relationships with LGBT voters, clubs and activists – who have provided the bulwark of support for Graham since first elected to the Council in 1998 – and peel their votes away from the veteran lawmaker.

Majors, the most high-profile member of D.C.’s 170-member Libertarian Party, has been seeking to grow his party and put forth candidates for almost every office since successfully gaining ballot access for the Libertarians following his unsuccessful bid to oust congressional Del. Eleanor Holmes Norton (D-D.C.) in 2012.

Majors says he wants to recruit more candidates to run in D.C. as Libertarians. So far, he says, his efforts have succeeded in building the current slate of Libertarian candidates – for mayor; congressional delegate; Ward 3, Ward 6 and At-Large councilmembers; shadow U.S. senator and shadow U.S. representative – which he bills as D.C.’s most diverse.

One of those candidates, Martin Moulton, is a gay man who serves on the public safety committee for his local Advisory Neighborhood Committee (ANC) and previously served as alternate delegate for Ron Paul’s 2012 GOP presidential campaign.

”I think we need honest, corruption-free candidates dedicated to serving the people,” Moulton says, telling Metro Weekly his ”frustration with the status quo” led him to say yes to Majors’s overtures and enter the race for shadow U.S. representative. He says he also appreciates the Libertarian position on decriminalizing recreational drug use, citing the particularly disproportionate incarceration rates for young, African-American males, convicted of nonviolent crimes in the so-called ”War on Drugs.”

”These are nonviolent crimes,” Moulton said. ”In a free society, we need to make our own choices without the government regulating our behavior.”